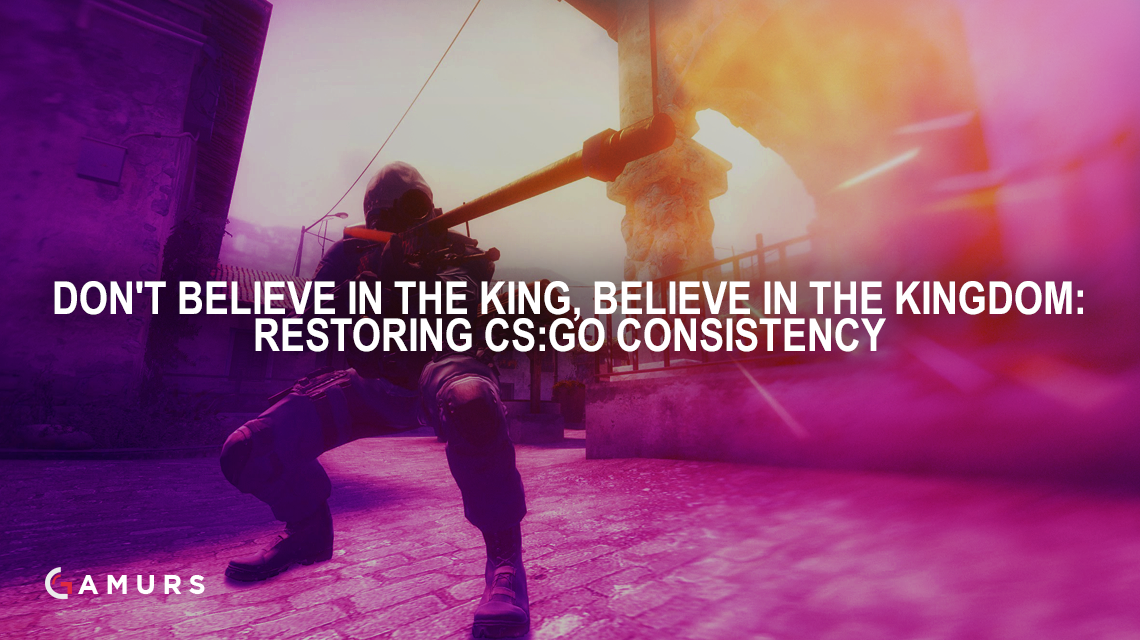 The Counter-Strike: Global Offensive monarchy is in shambles. Regal names that once ostentatiously flaunted royal domination now toil in a quiet life of languid obscurity. The feverish capture of a first place finish seems to only curse teams with an inconsistent oscillation in their following attempts to replicate results. As such, the traditional currency of gold medals to evaluate a team’s place in the hierarchy has been completely devalued. The only worthwhile ambition is consistency.

While teams sparking to the peak of their powers one moment and then returning to mediocrity the next makes for an entertaining novelty, this cannot be the continued way of trying to fill a vacant throne. The focus should be in restoring a recognizable and permeable hierarchy. We no longer have the luxury of relying on a dominant king, we must rely on the ideal of a consistent kingdom. Obviously though, this is easier said than done, to bring about the extermination of randomness and the reduction of underdog upsets does not come over night, nor does it come with a smooth transition.

An Offset Change to the System

One of the primary reasons for the vacancy of a dominant king in the CS:GO kingdom can be traced to the Valve coaching rule. Back in August, the rule to limit the communication between coaches and players to pre-game, halftime, and one of four 30 second timeouts, at all Valve sponsored events (i.e Majors) set off a chain reaction. With the exception of StarLadder and EPICENTER, every organiser stopped the usual in-game dialogue between the coach and players – drastically changing the dynamic of most teams. With the majority of top teams moving towards offloading in-game management to a coach, and focusing on bolstering the skill of their roster with five pure fraggers, the Valve ruling came as an extreme catalyst for change.

Teams had to reintroduce the role of in-game-leader to a player in the actual server, and as a result, not only were almost all player’s roles on teams suddenly changed overnight, but they were now without a potentially vital stabilizer of emotions and conflicts. Many coaches, even if they didn’t function as a tactical mind, were integral in keeping the star player cool-headed, and the team environment positive and fertile to allow individuals to perform without fear of reprisal.

This initial shock to the system will reduce in impact overtime. Simply put, most teams will come to terms with change and work to change their dynamics over a window of time. How long will this window be? Who knows. Some teams are actively moving pieces around in their organizations and rosters to permanently create or swap an in-game-leader, while others have Band-Aid fixes in hopes that the change will be revoked, or at the very least, leniently altered. The only way to fix this shakeup is through rosters working through any leadership/calling issues that the change caused through regular LAN play, and keeping rosters together long enough to actually find the cause of these issues.

The creation of a consistent CS:GO kingdom will also come through the ELEAGUE Major at the start of 2017. While in previous years, the September – November period would’ve had another major, 2016 has been a string of international LANs with varying teams, all with different schedules and different methods to approaching the stacked tournament circuit at the end of the year. Some teams, like Dignitas, have opted to play as much as possible, which can lead to burn-out and an increase in upset results, while others like Virtus.pro have gone for a big boot camp in the leadup to events – namely ELEAGUE – which has reduced the amount of data on that team overall. Both methods increase inconsistency, as they both muddy the waters for predictions and consistent trends, either having a lack of data, or data that is totally opposite to recurring trends.

While these issues wouldn’t have been totally solved by a major in this time period, it would’ve at least been a moderating equalizer of sorts that would have every single elite team dialed in on a single event, rather than scattered excuses, data points and teams over an oscillating international circuit. Even though the ECS Finals are set to finish days before the upcoming ELEAGUE Major Qualifier, hopefully, the major itself will have the effect that the non-existent third 2016 major would’ve had in being a funneling equalizer to restore consistency.

The other problem that has been destabilizing the rankings for the last two or three months has been the fall of some legendary teams, and the flood of talented tier two teams to take their place. The most poignant example of this is the destruction of both GODSENT and Fnatic, whose players boast some of the most storied and pedigreed careers in all of Counter-Strike. Once the most talented and premiere players, they are now left out of the top-15 teams in the world and in the shade of their own failed roster swap. Their cataclysmic downfall, combined with the player break that saw SK Gaming take a step down from their throne of domination, has led to the apex predators actually losing battles to their now evolved prey. Cloud9, Dignitas, Astralis, Faze, and NiP have all looked to be world beaters in spurts, while also easily beating each other and losing to lesser teams.

This new breed of “elite” status has led to a top-10 that can see the teams ranked six through 10 beat teams ranked one through five in shocking fashion, on almost any given day. This back and forth trading of best-of-one matches can only be solved through creating an actual divide in skill between the top end of the rankings and the lower-end. This is by no means saying that a, tyrannical, sith-like, Fnatic of 2014-15 team must rise to slay all those beneath them; rather, that teams that are clearly on the rise, like Astralis and NiP, need to beat out teams that are slumping, like Na`Vi and G2. This clear divide is the basis of a kingdom, which is in no sense egalitarian, but rather, consistent, and subject to analysis and prediction – something the current environment of competition is not.

So, how is this divide, and as a result consistency, created? I think it’s a combination of the points above, time, more games played by the top teams, and a community and team-wide focus on the major/ or major qualifiers. Through directed attention on the problems at hand and basic acknowledgment of solutions, it’s not out of reach to enjoy the stability and narrative-rich scene we once had. For the time being, however, do not direct your focus on creating a dominant king, direct it on creating a consistent kingdom.

Written by Max Melit – who likes Chance the Rapper so much, he wrote an entire article around one of his lyrics. Complain about this on Twitter @max_melit.