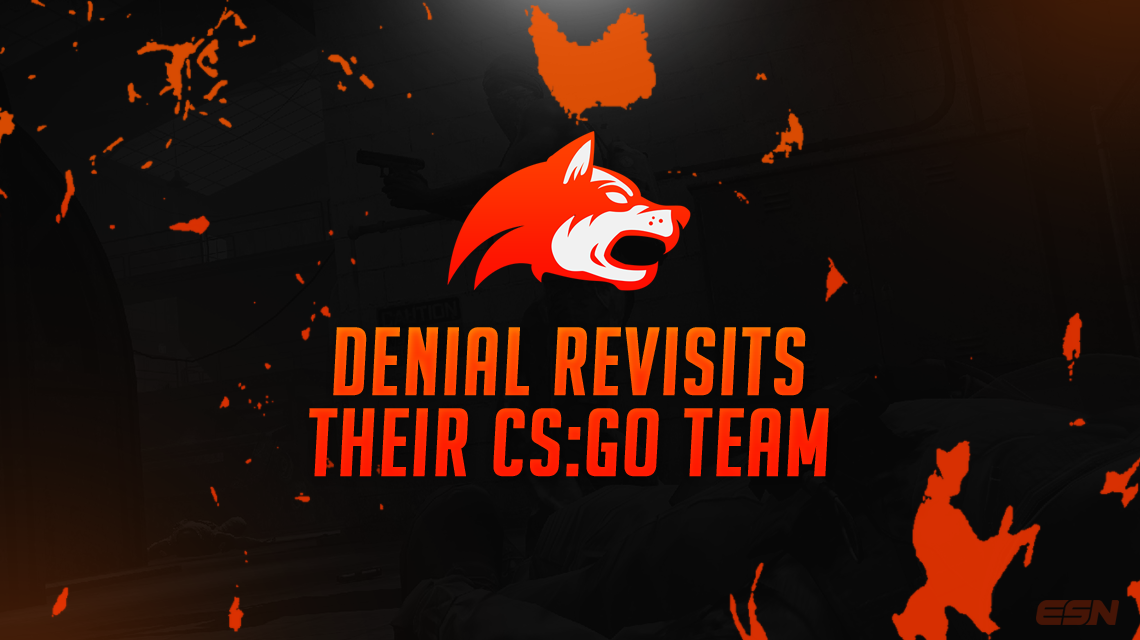 In the past, Denial eSports’ Counter-Strike: Global Offensive team had a decent amount of success throughout its timespan but after the middle of Jan. 2015, they fell off and were disbanded. Now they return, looking to recreate what they once had.

Before January, the team was beating teams like Cloud9, Netcode, and Team eLevate every so often. After January, Denial eSports went through a lot of roster changes, resulting in multiple roster switches for over the next three months.

Their final squad consisting of Kyle “ flowsicK ” Mendez, Soham “valens” Chowdhury, Timothy “ autimatic ” Ta,  Andrew “Professor_Chaos” Heintz, and Joshua “ sanczz ” Ballenger, were only together one game before the team disbanded in March after a 2-0 loss to Team Liquid.

The Denial organization took a break and focused on other areas of expertise. Now, in the month of October, Denial eSports has brought forth new news:

Denial eSports is back and has reincorporated a new Counter-Strike eSports team into their organization. The tweet confirming the recent rumors was released from their main Twitter account a few days ago.

The team now currently consists of:

All the players under their roster are relatively new to the professional/semi-professional scene. In fact, no one on the current roster has played in a major league -ESEA, CEVO, etc.- before the start of this year. It will be interesting to see how the success of the team plays out.

They seemed to have some good moments and thought-out strategies within their game against Team Coast last night that ended in a tie (1-1). One can only hope that the team will be able to find a groove in the near future. According to team captain Denial Shinobi, they’re 6-2 on their ESEA Team:

Everyone will be looking to the North American scene to step up in the 2016 CS:GO season against the European scene. With Cloud9 and CLG leading the charge against the EU, who’s to say that another underdog can’t come out ready to fight? As the CS:GO community continues to mature, new teams will be given opportunities to take down the European giants. Denial eSports chose a good time to come back.

Do you believe that the new Denial eSports CS:GO team will perform well? Let us know. Stay up-to-date with future team announcements over on our Twitter – @ESNCS .