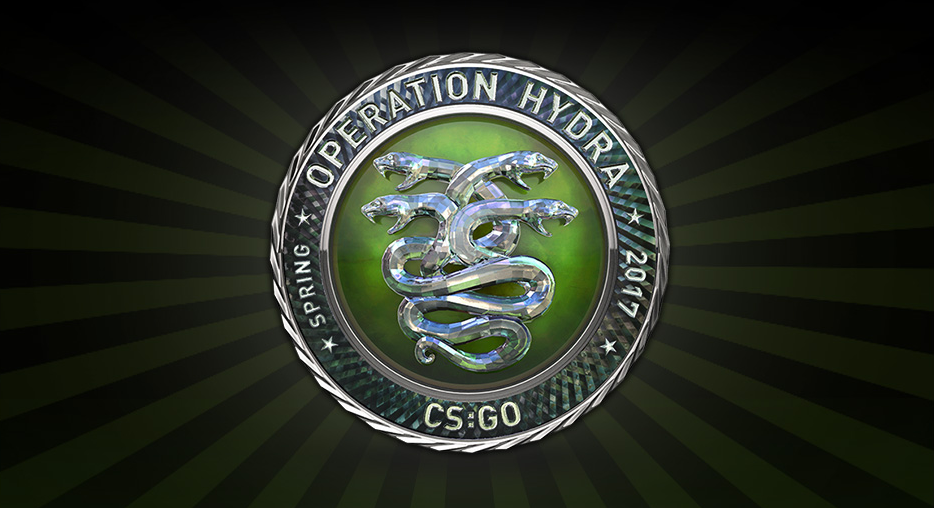 The newest skin collection to rock Counter-Strike: Global Offensive is one of the game’s most unique lineups to date.

The Operation Hydra Collection gives off a melancholy vibe. Most of the skins depict odd creatures or visuals, but a lot are also pretty pleasing to look at. So their prices have already sky-rocketed into the hundreds, price points show that put them in fair competition to their predecessors in The Spectrum Collection.

Prices for the Operation Hydra Case sit at about $2 on the Steam Community Market front page. Players who are fortunate enough to have a case dropped for them can opt to buy a $2.50 key and gamble for an expensive skin or they can take the $2 return instead of risking a key for common “penny” skins.

Note: The prices have not been displayed due to the high demand and fluctuation of “higher end” weapon skins. This trend occurs whenever a new weapon case is introduced.

This AWP features a leaf-covered samurai with a sword about to enter combat with a demonic creature. The scope is patterned with a wavy purple pattern that’s reminiscent of the fan-favorite AWP Dragonlore.

One of CS:GO’s most fabled designs, Hyper Beast, makes a comeback in a Counter-Terrorist variety. It becomes the fourth skin of its kind to be introduced into the game, next to its Nova, M4A1-S, and AWP counterparts.

The Hellfire is the second skin of this collection to feature a cartoon demon figure. Skulls, flames, chains, and a devil’s tail line the gun as the white text appears to read “Welcome to Hell.”

Galil skins have finally gained another vibrant variant next to its colorful “Rocket Pop” brother. Its stripe and checker cotton candy patterns give it an extra “pop” that can satisfy your Terrorist needs.

A sly design on the Cobra Strike seems very fitting for the Operation: Hydra theme with its twin cobras on each pistol. The barrel and its adjacent parts mirror the camouflage of an actual snake.

The sleek black and maroon finish on this planetary gun gives its handler a futuristic vibe, assisting in one-tap delivery to the poor soul in its crosshairs. The number “01” is shown above the magazine slot for weapon identification.

The scout’s newest skin rendition depicts an indiscernible design that appears to represent feathers radiating out from bullet chamber. Itt looks like a well-crafted Rorshach Ink Blot with color.

This P90 can evoke goosebumps thanks to the eerie and pale hands reaching for each other. The odd hand formations suggests death to whoever mishandles or misjudges the 50 clip sub-machine gun.

The Red Rock on this P250 is a badge on the handle that contains a pyramid engraved into what seems to be a star. Its autumn digital camouflage is topped off with a small transcription that reads “comic series .357.”

The Woodsman has no appealing features that make it stand out among the 17 other skins in this case. The woodland digital camouflage on the handle is a nice touch to this sub-par pistol showcase.

The Briefing has seeped its way into CS:GO for the second time after following in the footsteps of the UMP-45 version. The dark blue and gray waves throughout are perfect for adding unique and vibrant foil stickers.

A blue schematic grid covers every inch of the Counter-Terrorist starter pistol except for the barrel. The prominent silencer shines brightly in the same way as its USP-S “Royal Blue” brother.

Pink yet dim Hawaiian flowers complete the main rectangular body of this Terrorist weapon. This MAC-10 will have you serenely singing ukulele tunes to yourself on second round force buys.

Another black and white pistol has been introduced to the Terrorist side, but in the form of the Tec-9 instead of the usual Glock-18. The contrasting finish on the barrel contains a mix of flowers, leaves, and vines.

The Macabre displays a deathly hallow design thanks to its numerous skulls and desert-like grains. This morbid rifle appears similar to an arid desert digital camouflage can blend well with Terrorists.

An all-black aesthetic plagues the composition of this newly nerfed UMP-45. Further examination of the weapon skin reveals an unsettling contrast of roses and skulls resting on each other.

A dull, blotchy finish covers the Hard Water, which also contains a blue tip as the exit point for its spread rounds. It’s oddly similar to the pricy “Dark Water” and “Bright Water” skins of the M4A1-S.