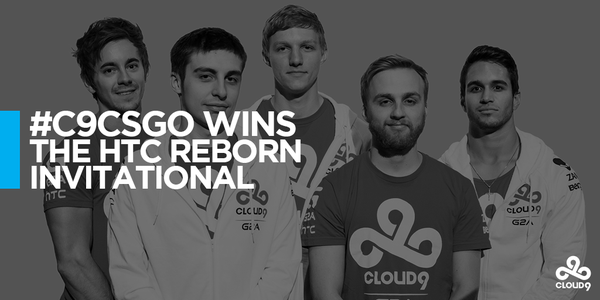 Over this weekend we were indulged with a tournament sponsored by HTC eSports & partners which focused on North American talent whilst the European-counterparts attended Fragbite Masters. 8 invited teams fought hard and fought back to be crowned the first champions of The HTC Reborn Invitational, and after a long weekend, Cloud9 have come out victorious.

In many minds NA CS has gone through a very impactful shuffle unlike many that came before it. This shuffle has shown us the good, and the bad that competitive CS has to offer the eSports world. Having more or less recently finalized with the additions of Josh “jdm64” Marzano earning a fifth spot for CLG, and Kyle “flowsicK” Mendez officially earning a fifth spot for Team Liquid. The shuffle had us worried specifically with Cloud9 as not one, but two players, one being a veteran and long standing member of the C9 roster were unexpectedly removed.

To many, a god among men, an ultimate troll, a douchebag, or the guy who can be incredibly bad or incredibly good. This former Cloud9 member was a part of the considerably best compLexity lineup for its CS:GO team when its rosted was filled in with Hiko, swag, sgares, n0thing & the aforementioned Semphis. Under this lineup compLexity secured the NA scene under its grip, with its rivalry with former iBP being its main and only competition.

You can compare this scenario to what NIP has gone through, and how they dominated the international scene with their continuous victory’s — very specifically 31 back to back tournament wins. They were and are considered one of EU’s best teams, but teams caught up, the likes of Fnatic, VeryGaming (now an iteration of EnvyUS), VirtusPro & TSM (formerly old Dignitas). Now the tides have turned, NA has found its true & rightful king of the north international contender, while EU is in an all encumbering king-of-the-hill-esque fight to decide who is the best in EU.

Back to NA. To see Cloud9 win with that landslide of a victory, it further cements my opinion on their overall success. Their roster is jam-packed with NA’s best, and with their raw-natural talent, their reformed play style and impressive knowledge, they can do what no NA team has done since 1.6, they can take a title home. I recently wrote an article related to TL (Team Liquids) potential to win ESWC, but noted how vigorous that road ahead was, I was right — Lets see how they can come back from this blow.

Cloud9 has statistically proven their dominance with an impressive #1 standing in the ESEA ESL Pro League for NA. A feat that shouldn’t be looked over as ESEA houses some of the best NA prospects. Cloud9 has possibly found what they were looking for, and with this roster the sky is their limit. I could go over their play-by-plays, their data, but that’s for you to look for. Join them as they compete in major NA leagues for the prize pots, the glory, the recognition & the fame.

You be the judge. Can they do what countless dozens have tried and failed before them?

I write articles sometimes! I don’t do it as a main career, but I surely love doing it as eSports is my career. Have feedback on my articles or want the scoop on when I’ll be coming out with another?