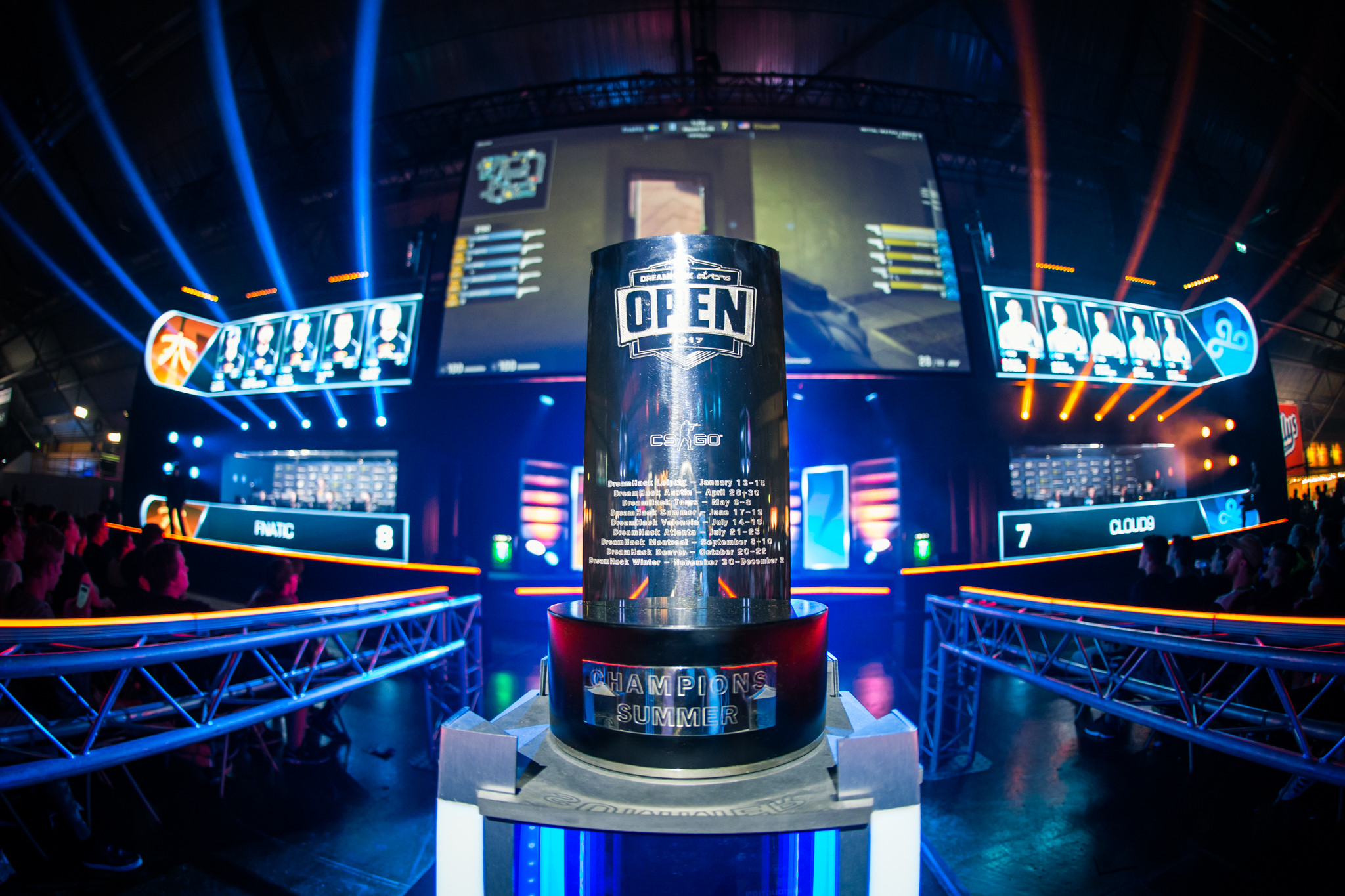 Since the end of the Luminosity/SK Era in the summer of 2016, the professional Counter-Strike scene has lacked a singular dominant ruler. We saw numerous tournament champions in the fall and winter of last year during the Uncertainty Era, but following a reconstruction of the top teams after the ELEAGUE Major, we’ve entered the more stable, top-heavy Parity Era.

Only four teams have any shot at claiming the next Era: G2, Astralis, FaZe, and the leading contender, the new SK with João “felps” Vasconcellos. This conflict, which Duncan “Thorin” Shields has called the “Clash of the Four Kings,” resembles an entirely different piece of popular media.

Much of the discord and violence seen in the Game of Thrones television show and the original A Song of Ice and Fire book series is derived from the death of King Robert Baratheon. With a newly emptied thorne, five forces led by five self-proclaimed monarchs duke it out to decide the fate of Westeros, creating the “War of the Five Kings.”

Two of these five men are Robert’s own brothers, Renly and Stannis, and like any Counter-Strike team or player, both men have their own specific proficiencies and vulnerabilities. In A Clash of Kings, a blacksmith likens the three brothers to steel, iron, and copper:

“Robert was the true steel. Stannis is pure iron, black and hard and strong, yes, but brittle, the way iron gets. He’ll break before he bends. And Renly, that one, he’s copper, bright and shiny, pretty to look at but not worth all that much at the end of the day.”

If we extend this metaphor into Counter-Strike: Global Offensive which team or teams would we assign to each metal? Instead of the standard gold-silver-bronze question of who’s the best, what do some of the best teams in world look like and how well do they handle the strain of competition?

Astralis is the best copper candidate. They have a certain shine or polish to them even if many casual observers don’t appreciate Astralis’ play. Remember that 92 percent of pickem’ players thought Na’Vi would defeat Astralis in the semifinals of the ELEAGUE major. It’s understandable. Astalis doesn’t have a player like a Nikola “NiKo” Kovač, Oleksandr “s1mple” Kostyliev, or a Kenny “kennyS” Schrub that can take over the game through their preternatural mechanical prowess, and they don’t have a style that brutalizes their opponents like a Virtus Pro or a 2015 LDLC/EnVyUs.

They instead play a very tactical, fundamentally sound game while relying on a different kind of superstar in Nicolai “dev1ce” Reedtz, who finds impact more through his mobility and positioning with the AWP. But for some enthusiasts and analysts, that’s exactly why Astralis’ play is so attractive. In addition to having skilled players in effective roles, each Astralis win could equally be called the product of an extended series of intelligent actions. They look like they are playing the game the “right” way, and that’s the luster that shines beneath their apparent plainness.

They’re also very consistent. Since picking up Lukas “gla1ve” Rossander in October 2016, Astralis has made it into either the finals or semifinals of all nine premier-level LANs they’ve attended. Of those nine, Astralis has won three tournaments outright, including the ELEAGUE Major, and have only lost a best-of-three or best-of-five series to the most elite teams of the time. Yet this version of Astralis has never been dominant or unbeatable.

They didn’t overcome OpTic in the finals of ELEAGUE Season 2. They couldn’t defeat Virtus Pro for a second straight time in DreamHack Masters Las Vegas semifinal. They fell behind at the end of the FaZe-Astralis trilogy, and they were unable to halt SK’s scene-leading run when they finally met at the ECS Season 3 finals. Unlike some of the very best rosters to every grace CS:GO, they lack a defining gap, some tangible or indiscriminate “it” that separates them from the rest of the best of the field. Aesthetics aside, Astralis clearly lacks that level of durability, they never break, but they frequently have to bend the knee.

At the other end of the Copper-Astralis binate is iron and G2. While the French “superteam” is the weakest of the current “Four Kings” of Counter-Strike, they have still won two tournaments over the past two months, one of which was the premier-level ESL Pro League Season 5 Finals. Their iron-esque quality has little to do with their overall level of prowess in comparison to SK, FaZe, or Astralis, however. It’s about their style of play.

If you look at G2’s lineup, they certainly are not lacking in aimers. Their current roster might even be the most talent-dense five-man combination possible in the French-Belgian scene if you exclude Adil “ScreaM” Benrlitom. That said, beyond the beauty or awe that can come from G2’s ability to align crosshairs with heads, their overall play just isn’t attractive. They have a looser, more individualist style which is often less appealing to experts. But, more pressingly, their approach to the in-game economy can sometimes be downright repugnant. Not only do they choose to force buy frequently, which can lead to back-and-forth low-buy nightmare games, they also opt into expensive double AWP setups whenever possible, which only makes their bank all the more breakable and engenders even more force buys.

As for durability, G2’s results have been fairly up and down going from event to event. After they only placed top-four at the second-tier DreamHack Austin event, they won DreamHack Tours and EPL Season 5, but then were eliminated in groups at ECS Season 3. Instead of “bending” as Astralis does, losing only to the very best teams, G2 can break. For instance, they lost best-of-three series to low-tier one/ high tier-two teams in Gambit in the semifinals of DreamHack Austin and Na’Vi in the quarterfinals of ESL One Cologne. On the other hand, G2 can sometimes hold under excessive pressure. Their 2-0 win over SK at the EPL Season 5 finals is the first and only victory over the current world number one in series play since DreamHack Master Las Vegas in February.

Now, the suggestion is not that some synthesis of these two types will create the next “true steel” team. Surely being a world-leading, era-defining team has nothing to do with attractiveness or ugliness, it’s all about durability.

Yes, a more cerebral, fundamentally sound style might enable more consistent results, as their efforts are more repeatable, a looser team might subject to more variability as individual form can vary from day-to-day or map to map. But the best teams of all time can fall into either camp—or somewhere in between.

The original Fnatic roster with Dennis was on the extreme end of using raw skill rather than tactical finesse, yet they were able to win six straight tournaments at the end of 2015 and the beginning of 2016. Conversely, the SK team with Lincoln “fnx” Lau who won two majors during the Luminosity/SK Era more closely resembles the current Astralis, as their chief strength was their level of coordination in mid-round play rather than mechanical ability.

Steel is a combination of carbon and iron along with some others elements added in such as manganese, chromium, nickel, Titanium, or many other options. It’s heated to a certain temperature, treated in a certain way, and suddenly it’s the hardest metal-alloy known to man. But I don’t think we know what makes the perfect metal or a “true steel” team in Counter-Strike: Global Offensive.

Going into this upcoming Valve Major in Kraków, the expectation is that SK Gaming will win the whole thing. They’ve won four of their last five tournaments, two of which were premier-level, while the core of the team has won two majors previously. But is that enough of a stress test? And more broadly, is the tensile strength of the best teams in the world proven by a major win or does a total tournament victory here finish the work of the forge?

Regardless, as bright lights beam heat onto the center stage and the pressure of a million dollars bears down on these would-be kings, the end product is inexorable: 15 pieces of scrap, and one could-be chunk of “true steel.”