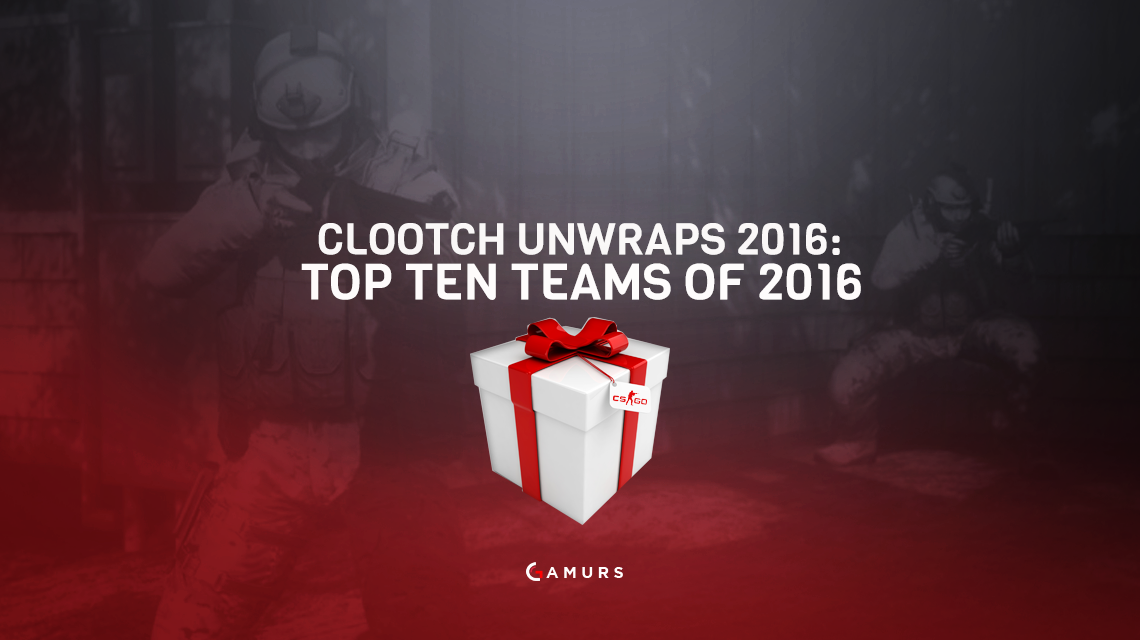 Welcome back to “clootch unwraps 2016,” a new series I will be starting in the build-up to Christmas and the New Year. Though my releases haven’t been as constant as I’d have liked, I have some planned for the next few days. Each of these articles will be recapping and highlighting a certain element of this past year in Counter-Strike: Global Offensive. This could include what matches were the best, the most improved player and other storylines we’ve witnessed as we head into 2017. Our ninth feature will focus on this year’s top 10 teams.

Taking a whole year into account when measuring a team’s success is tricky. In the constantly evolving, changing and often-sporadic landscape that is professional Counter-Strike, teams can find themselves thriving on global success one month, before losing horrifically the next. Bearing this in mind, my rankings of teams will be based on their offline results in large, international events throughout the year.

G2 rode a short and high wave of form in the middle of the year, before their results dwindled back into mediocrity for the remainder of the year. Their standout players during this time period were by far the duo of Richard “shox” Papillon and Adil “ScreaM” Benrlitom who looked like they would be able to conquer the scene together, supported by their team.

G2’s redeeming events this year were the ESL Pro League Season 3 Finals, where they took the world champions, LG, to a heavily-contested five map series and proving their strength as a team. Though they lost, it changed the light in which G2 was viewed. The French-Belgian team then grew on this success in the ECS Season 1 Finals in London, winning the event and beating LG in their meeting with them. Their success was short lived, but their play style during the time was electric and unbeatable.

Cloud9 didn’t place ninth just to tie in with their name, rather because their recent placing at the ESL Pro League Season 4 moved them from a strong NA team to a side capable of globally dominating. The finals of the season that took place in São Paulo, Brazil, was a stage on which Cloud9 proved how their young acquisitions, Jake “Stewie2k” Yip and Timothy “autimatic” Ta, had been able to help transform the team into an elite prospect.

C9 won the grand final of the season, suitably, against the home team and world champions SK Gaming. The best-of-three was favoured towards the Brazilians, as they were known to have a deeper map pool and better synergy than their NA opponents. However, C9 took the final 2-1 and picked up their first international and elite tournament win of 2016. Cloud9 had no other exceptional results this year, but fully deserve their place at ninth for a strong win at a strong event.

Dignitas place eighth on my list as, although their win in EPICENTER was of epic proportions, it was only a single event win and shouldn’t be hyped up to more than that when looking at a whole year. For the majority of 2016, Dignitas was unable to replicate the success that they’ve found as of late due to them missing a vital part of their current winning mechanism, a magic player. Emil “Magiskb0y” Reif proved to be a catalyst of form for the predominantly-Danish team, and the hugely impactful rifler has carried Dignitas, not alone by any means, to a strong position in the scene. In the victory at EPICENTER, Dignitas beat some of the world’s best teams in VP and Na`Vi: both in a best-of-three series. It’s a shame that the team peaked so late in the year or I’m sure they’d be placing much higher up in these rankings.

Yet another team whose form flourished as the year closed; OpTic’s recent results have been strong enough to earn them the seventh spot on this list. The addition of Tarik “tarik” Celik to the team has been much like gla1ve joining Astralis in that it spurred the team into good form and legitimate wins. The North American (NA) team’s crowning achievement came with their win at ELEAGUE Season 2, which came as a shock in a tournament brimming with elite sides.

Like Astralis’ recent rise, ELEAGUE was just the spark that ignited OpTic’s flame. Following their win in Atlanta, the side went on to place second in the ECS Finals Season 2, only losing to Astralis in a rematch of the ELEAGUE grand final. A month before their stunning win at ELEAGUE, OpTic had taken first place at the small LAN of Northern Arena Montreal, though they did defeat G2 in the final, making it both a successful and legitimate event in proving their consistency for the team.

The great “Swedish Swap” in August of this year split possibly the most successful Counter-Strike roster ever. It orchestrated a move that swapped three of Fnatic’s players, the world’s most dominant team less than a year before the shuffle, with three players from fellow Swedish side, GODSENT. Since the swap, neither team has reached the glory, heights or place in the world of Counter-Strike that the great Fnatic empire did. However, the roster pre-swap was so strong that they deserve a place in the top 10 teams of 2016.

In MLG Columbus and ESL One Cologne this year, Fnatic placed in the quarterfinals and semifinals respectively. They were bested only by VP in the inaugural season of ELEAGUE, knocking Na`Vi out of the tournament in the semifinals. Their most dominant result this year was their victory at IEM Katowice, where they defeated the elite LG team in a best-of-three final without dropping a map.

Astralis had a rocky year and, like a number of teams, an inconsistent one. The Danes were commonly thought of as one of the best teams in the world on paper, yet rarely realized the skill they had into strong performances and tournament wins. This changed in the latter stages of 2016, around the time new in-game leader Lukas “gla1ve” Rossander came into the team as their tactician, with the side steadily increasing their placings at events, culminating with their win at the ECS Season 2 Finals.

At ECS, Astralis picked up good wins against the likes of SK Gaming and the momentum-fuelled OpTic Gaming. The Danes placed second at ELEAGUE Season 2, progressing to the grand finals after facing NiP and SK Gaming in the previous rounds. A semifinal appearance at the stacked IEM Oakland event makes the end of 2016 a great sign for Astralis’ improvement, as they look to be gaining the form they always looked able to display thanks to their talented roster, spearheaded by AWP and rifle-extraordinaire Nicolai “dev1ce” Reedtz. If their form continues, the recent stages of 2016 look to be a sign of Astralis’ results-to-come.

The Virtus Plow seemed to have gone into retirement in the first half of this year, as the consistently strong results we had come to expect from the Poles were nowhere to be seen. With ELEAGUE Season 1 came the rebirth of the Plow, however, as VP managed to shock the community by taking a tournament filled with every strong team in the world. Along their way to the trophy, VP met, and defeated, the likes of NiP and the strong and legendary Fnatic lineup in a best-of-three.

Although ELEAGUE was the stand-out moment for VP this year and their turning point to form, it was not their only good result. They also clocked two second place finishes at events of prominence: EPICENTER 2016 and ESL One New York. Had they shown this level of form throughout the entire year, this team would be higher up this list, but unfortunately, we only saw half a year of the Plow, hence why I place them below Na`Vi, who was a more consistent side.

The mainly-CIS team had an alright year, though not as good as I feel their lineup should be having. Their most notable results were their long-overdue win at an elite event, ESL One New York, and their second place finish at MLG Columbus. Their triumph in New York may be more impressive than placing runner-up at the major, due to their undefeated tournament. The only maps that Na`Vi lost were two separate 2-1 series that ultimately ended in their favour. On top of this, Na`Vi defeated Virtus.pro in the final, a team that looked strong since their ELEAGUE Season 1 victory, which made it seem like Na`Vi was the stronger of the two.

What Na`Vi had this year that Virtus.pro didn’t was a strong showing at one of the major tournaments. While the Poles certainly came into their peak form towards the end of the year, Na`Vi made up for this with a grand final appearance at the first major, having dispatched NiP and Astralis to get there. Though it was a good year for the team, boasting a lineup peppered with the firepower of Egor “flamie” Vasilyev, Oleksandr “s1mple” Kostyliev and Ladislav “GuardiaN” Kovács, it’s feels underwhelming to see that Na`Vi did not win more this year.

The runner-up position could go to a number of teams such as Na`Vi, Virtus.pro or NiP. The reason I chose NiP is that, when looking at their results in the talent-filled events, they shined the brightest. Throughout 2016, NiP picked up wins at DreamHack Masters Malmö, which saw them defeat Astralis, Virtus.pro and Na`Vi in series, the StarLadder i-League Season 2 Finals, where they overcame Cloud9 and G2 in 2-0 victories, and IEM Oakland, where the Ninjas fought tooth and nail to claim the title ahead of SK Gaming in a gruelling best-of-three grand final.

The year has been an inconsistent one for the Ninjas, where their results have been spread out and hard to predict. Yet, despite having to play without Jacob “pyth” Mourujärvi for a decent portion of the year, the Swedish veterans have collected plenty of prestigious wins this year in a scene filled, more than ever, with world-class teams.

The Brazilians, kings of the year, have left their mark on 2016 following a dominant spell around the earlier and middle parts of 2016. At the peak of their form, the Brazilian team managed to claim the title in both MLG Columbus and ESL Cologne 2016, the only two major tournaments of this year. In these victorious campaigns for Gabriel “FalleN” Toledo and his men, the squad took best-of-three wins over all of the big names in the scene. Astralis, Na`Vi and NiP were slain by Luminosity Gaming (LG) in Columbus. Virtus.pro joined that list in Cologne, when the team was playing under the SK banner. On top of this, the team was able to record 17 straight wins on Train while playing as SK Gaming.

The only slight smear on an otherwise-unblemished era for the Brazilian team was that they never defeated the full-strength Fnatic squad in a best-of-three. While the former kings of the world have since fallen from their elated pedestal, the dominant roster that featured Olof “olofmeister” Kajbjer and Freddy “KRiMZ” Johansson was never defeated by SK/LG. However, this isn’t enough to deny SK’s number one spot this year.

Championship wins at two majors and ESL Pro League Season 3, as well as their plethora of semifinal and quarterfinal finishes, makes 2016 belong to only one team, the Brazilian masters.

Who were your top 10 teams of 2016? Let us know by commenting below or tweeting us @GAMURScom.