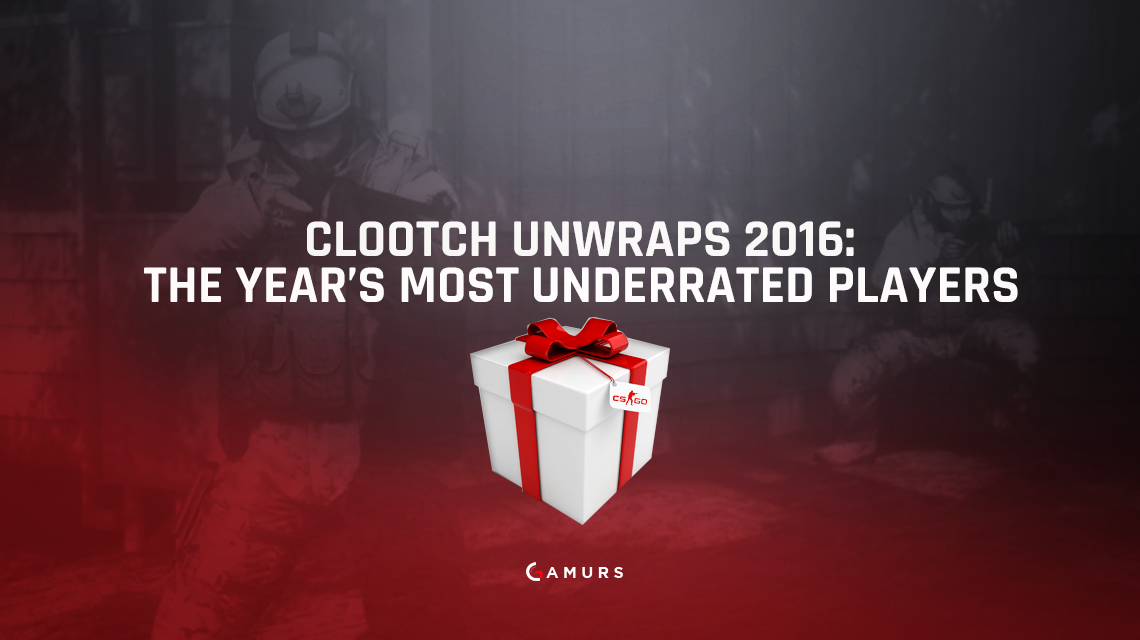 Welcome back to “clootch unwraps 2016,” a new series I will be starting in the build-up to Christmas and the New Year. I aim to release at least three of these articles a week, and each one will be recapping and highlighting a certain element of this past year in Counter-Strike: Global Offensive. This could include what matches were the best, the most improved player and other storylines we’ve witnessed as we head into 2017. The seventh installment will focus on this year’s underrated players.

It’s my opinion that bubble is perhaps the most underrated player in the scene at the moment as, despite his ridiculously consistent dominance this year in the lower tiers of the scene, he isn’t as recognised as I feel he should be for his skill level. Kostadinov can AWP and use the rifle with equal strength, and has consistently shown that he can translate his online performances to the offline stage for the games that mattered.

A possible cause for why I feel bubble is underrated is because the teams he has been on have not won anything of huge importance this year. The Bulgarian squad he was with for the majority of the year, who played under the names E-Frag, Orbit and MK, were on the fringes of reaching the two main qualifiers for the majors this year. While this sounds underwhelming, in the deciding map to reach the ESL One Cologne Qualifier, bubble was the highest HLTV rated player on his team, as well as the only one without a negative kill/death ratio. This was a common trend during the offline event, as Kostadinov consistently played a vital role in his team’s wins.

The team’s most prestigious win this year was the ESEA Premier Season 22 Finals, where the team placed first in an event featuring teams such as Echo Fox and ALTERNATE aTTaX. Though they didn’t tackle any giants, bubble finished the short event with a +59 kill/death ratio and was clearly the X factor in helping his team take the title.

The offline consistency that bubble can produce is astounding, shown by his average rating during the PGL Minor that saw him and his team play against HellRaisers and Penta. Kostadinov’s average HLTV rating for the event, even though his team lost the final match 2-1 against HellRaisers, was a whopping 1.30. The grand final that dictated who would advance to the MLG Columbus Main Qualifier spoke to bubble’s strength once more, as he finished the series with a 1.23 rating against HellRaisers in a series his team would ultimately lose. His next closest teammate’s rating was 0.92. bubble’s rating was higher than all but Martin “STYKO” Styk’s on the winning side of HellRaisers.

Kostadinov is able to consistently perform at offline events against decent opposition, and usually is able to keep his form in matches the team fails to win. He was also MK’s, and all other names the five-man Bulgarian squad played under, main AWPer, yet could also handle the AK-47 or M4 with more impact than the majority of his teammates. He was the clear standout player on MK, yet was never noticed as much as I feel he should have been. The fragging monster has been overlooked with as much consistency as he shows in offline games this year, though his performance has warranted anything but that.

Simply put, AdreN is a star player of the much-improved Gambit team and hasn’t been noticed enough for it. The focus, usually, is centered around his fellow Kazakhstani teammate, Rustem “mou” Telepov. My inclusion of AdreN, but not of mou, is not a suggestion that I think he is better, rather that I don’t think his skill is recognised as frequently as that of his compatriot. Out of the two, I’d say they’re of similar skill, but it is AdreN who is underrated.

AdreN started the year with Gambit, often finding his strong performances mixed in around his weak ones, showing that he couldn’t consistently perform at his peak level. This is possibly where the thought of mou being the brightest star on that team came from, as there’s no denying AdreN started off the year as an inconsistent player who couldn’t be counted on to put up big scores when it mattered.

He has since turned this around and began playing at his potential more frequently, making Gambit a genuine threat. At their astonishingly successful ESL One Cologne 2016 campaign, which secured their legend status at the upcoming ELEAGUE Major, AdreN was the man on Gambit who can be credited for their two wins in the group stages. In both of the maps they played, AdreN was both the team’s top fragger and the highest HLTV rated player. The calm rifler enabled Gambit to get an automatic pass to the ELEAGUE Major due to their Legend status, something that cannot be overstated in importance. Despite this contribution to the team, AdreN’s vital role is frequently overlooked due to the other stars on his team, like mou and, recently, Abay “HObbit” Khassenov.

While HObbit was quite obviously the team’s MVP in the recent Dreamhack Winter 2016 triumph the team secured, AdreN continued to silently be consistent in his performance. AdreN had an HLTV rating of under one in only two out of the 10 maps they played in the tournament. He’s not the flashiest member of the team, but his impact is felt whenever he plays to his potential.

Heroic’s strongest player is someone who is often left out of the conversation when talking about the hottest young talents. The Dane has the talent to be a complete game-changing element when he is hitting shots, with snappy headshots on the rifle that can turn clutches, and even games, in his favour.

Heroic’s honeymoon period soon after the organization was founded by its members was a period where valde was less of a threat to enemy teams. As he’s improved on the team, however, he has been able to turn games on their heads due to his crazy-high, yet unreliable, strength. He suffers from problems with consistency, and rarely seems to be able to replicate the stretches of games where he just dominates. Although valde was instrumental in Heroic’s Mirage win over Team Dignitas in the grand final of Power-LAN 2016, he was absent for the first periods of the series. With an HLTV rating of 1.55 and an average damage per round of over 100, valde was clearly imperative to the team’s victory on Mirage. The Dane’s explosive tendency was not seen on the previous two maps, with valde only posting a 0.96 and 1.03 rating on Cobblestone and Dust II respectively.

The potential is there for valde. On his day, he can win games for Heroic and make one of the weaker teams in Denmark have the chance to beat anyone, like his insane map against Dignitas at Power-LAN 2016. Even though he seems to be struggling to make his explosive and highlight-worthy matches a norm, he is certainly one of the most skilled talents in his region and should be seen that way.

Who do you think has been underrated this year? Let us know by commenting below or tweeting us @GAMURScom.