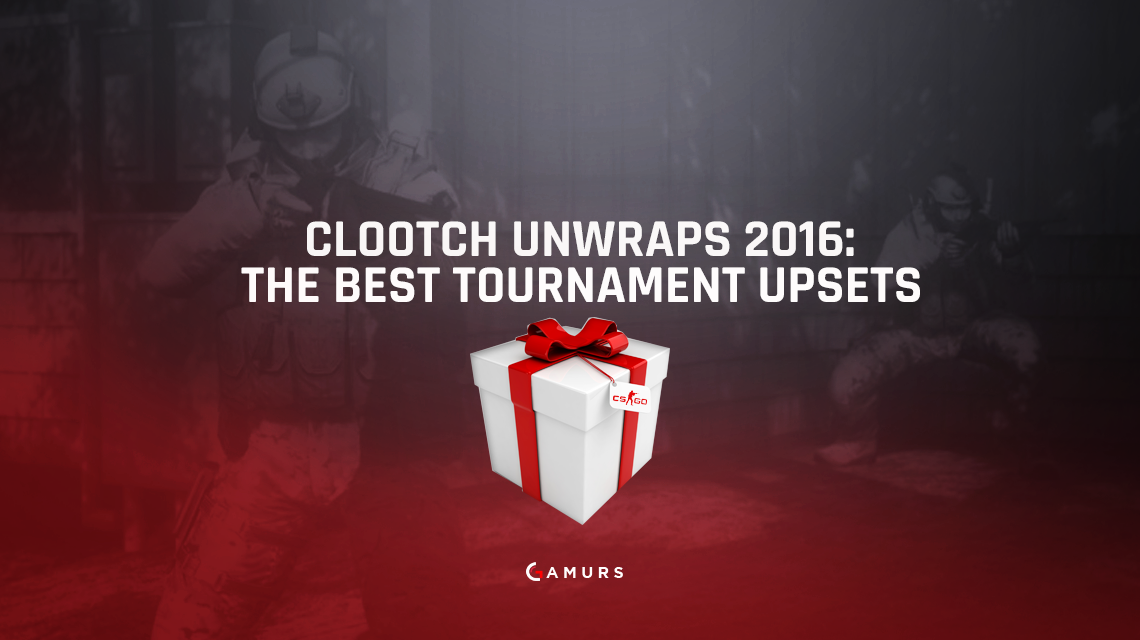 Welcome back to “clootch unwraps 2016,” a new series I will be starting in the build-up to Christmas and the New Year. I aim to release at least three of these articles a week, with each one recapping or highlighting a certain element of this past year in Counter-Strike: Global Offensive. This could include what matches were the best, the most improved player and other storylines we’ve witnessed as we head into 2017. The eighth episode looks at the best, most unexpected and most sensational tournament upsets of the year, and boy we’ve had a few of them.

OpTic’s startling win was the most surprising tournament result, by a mile, this year. In a fully-offline event, including a group stage that is played in the venue, with every strong team in the world attending, no one had OpTic Gaming pegged to win from the start. The team’s incredible journey through one of the year’s most stacked events will continue to shock me for weeks. There have been some upsets in CS:GO, but this one might take the cake.

The list of attending teams had every single team who has been considered one of the best in the world at some point this year. Double major-winning champions SK Gaming was included in the tournament, the undisputed kings of 2016 and a god-like side with a map pool of complete depth. Also, there was Na`Vi, recent champions of ESL One New York, which featured a plethora of elite talent, and a roster packed with young fragging power and wizened strategists. Champions of ELEAGUE’s inaugural season, Virtus.pro, hoped to make it two televised grand final wins in a row for them, coming off the back of strong performances at virtually every tournament they attended.

There’s a recurring theme amongst the teams I listed above: championships. ELEAGUE Season 2 was packed full of champions; champions of majors, EPICENTER, ESL Pro League, the past ELEAGUE season. With all of these champions, naturally the community saw the championship-winning teams taking the ELEAGUE trophy through their superior teamplay, individual level and form. What no one expected to happen was for a plucky underdog to sneak through to the final and shock the world on live TV.

OpTic’s win, however sensational it is based on who attended the event, could be put down to luck by naysayers. Their group featured slumping teams, EnVyUs and Fnatic. The final was against Astralis, a team unfortunately known for choking. The favourites were matched against each other while OpTic surreptitiously made their way to grand final. What I would say to this is that OpTic didn’t choose to take a path that avoided some of the best teams. OpTic won matches and beat whoever stood in their way. That’s what makes their win so beautiful. Whatever anyone says, OpTic demolished any opposing teams and played strongly throughout the entire event. This was their event and their win, regardless of what people may say.

OpTic’s win at ELEAGUE becomes more impressive to the analytic in me when you look at who the teams they beat defeated. OpTic defeated mousesports, who defeated Cloud9, reigning ESL Pro League champions. Virtus.pro, Season 1 champions, were knocked out by FaZe Clan, whom OpTic proceeded to defeat in the semifinals. The reigning world champions, SK Gaming, were defeated by Astralis in an upset of a semifinal. OpTic Gaming then took the trophy away from the outstretched hands of the Danes to claim it as their own.

The buzz around OpTic will fade in a week or two and they will be welcomed back to mortality. However, if ELEAGUE hosts a third season, we will once more remember OpTic’s incredible underdog story.

The North American team, Cloud9, had been on the rise prior to their victory at the Pro League Finals, but their rise didn’t induce hope into people that they could win the whole season. Jake “Stewie2k” Yip and Timothy “autimatic” Ta’s dynamic duo had been what Cloud9 needed, since their drop in form after last summer, to bring them back up to the top of their continent.

Cloud9 (C9)’s win at the Pro League wasn’t near the shock value of OpTic’s, due to the fact that C9 was generally seen as the stronger of the two and due to the noticeable absences of the amount of top teams that were at the finals. Na`Vi and Virtus.pro, two of the three strongest teams in the world, weren’t at the event due to them failing to qualify in the online league. It was largely the fault of the two teams that they didn’t qualify, though they weren’t helped by the less than perfect qualification system, but the gap they left discredited the event’s validity nonetheless.

Cloud9 did finish the Pro League Finals in a spectacular way, defeating home team, major champion and the strongest team in the world, SK Gaming, in the best-of-three finale. It was the perfect ending to their fairytale story, by defeating their toughest opposition in front of their fans at one of the largest events of the year.

Based on what teams they defeated, C9’s victory was both deserved and worthy of recognition. Despite being faced with a Na`Vi and VP-less tournament, the NA team managed to dispatch of a few European giants in the group stage that they qualified through with ease. C9 found victories over NiP and Team Dignitas in the group stages. Interestingly, Dignitas failed to qualify for the playoffs because they lost one game too many.

The grand final was where Cloud9 really showed their mettle though, defeating kings of the scene, SK Gaming, in a convincing best-of-three. Losing the first map, but taking it to overtime, saw Cloud9 start reasonably considering it was one of SK’s best maps. The following two maps were then taken by the Americans in dominant fashion, only allowing the Brazilians to gain five and six rounds on the remaining maps. Cloud9 had become champions of the most recognised running league in the world, and had bested the major champions at the last hurdle, to do so. This is a story that nobody predicted, but resonated with everyone.

EPICENTER was a tournament with no dead-weight in regards to teams involved, with its weakest two teams arguably being Dignitas and HellRaisers at the time. Dignitas managed to walk away with the title when all teams, but HellRaisers stood a chance of winning it was a tall order for them to accomplish and should be merited as so.

The Danes were on a hot streak prior to EPICENTER, similar to Cloud9 before their Pro League win, as they had been showing exciting performances online since the promising addition of Emil “Magiskb0y” Reif. Denmark’s hottest prospect’s arrival on the team was a turning point for Dignitas, and they quickly ascended to the elite portions of the Counter-Strike scene, beginning with their EPICENTER upset.

The list of other contenders for EPICENTER is similar to that of ELEAGUE Season 2. Na`Vi, SK Gaming, Virtus.pro and NiP were seen as the main four teams at the event, with little thought given to Dignitas soley because the skill level at this event was so high. Surprisingly, for most, Dignitas defeated Virtus.pro and Na`Vi on their playoff campaign, which secured them the title at EPICENTER’s first venture into CS:GO tournaments.

The aftermath of Dignitas’ win has been that they are now considered up there with the likes of Virtus.pro and Na`Vi. It seems the addition of Magiskb0y was enough to push the ever-promising, but underwhelming, Dignitas to a level that can see them compete with the true kings of the scene. We all counted Dignitas out due to the level of competition at EPICENTER, but their success in Russia surprised us and taught us not to count the Danes out again.

What tournament result shocked you the most this year? Let us know by commenting below or tweeting us @GAMURScom.