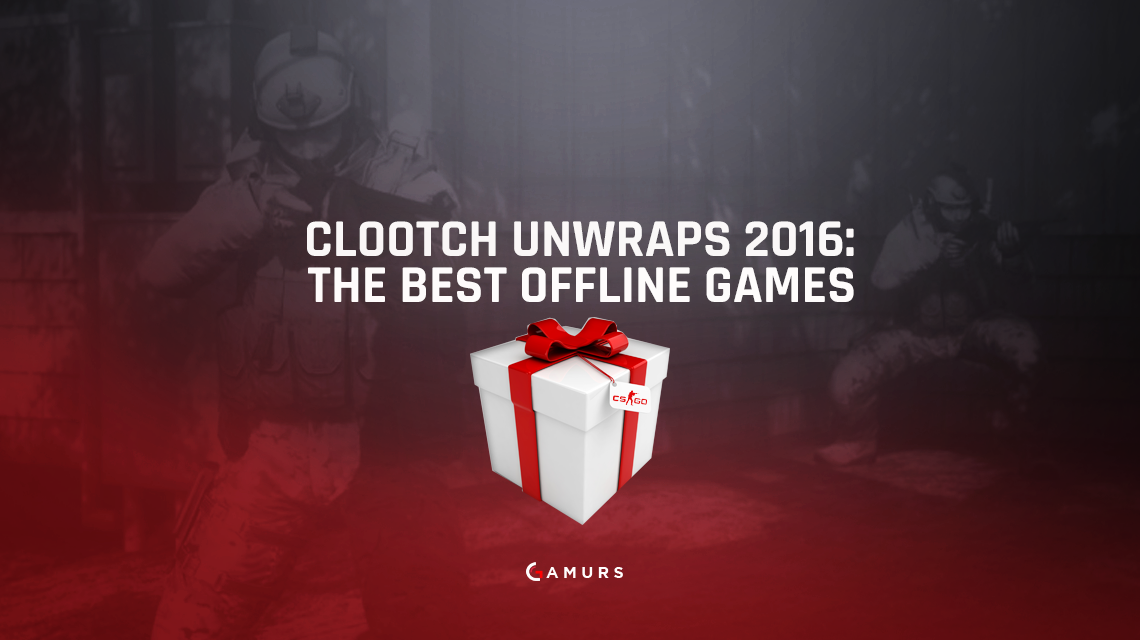 Welcome to “clootch unwraps 2016,” a new series I will be starting in the build-up to Christmas and the New Year. I aim to release at least three of these articles a week, and each one will be recapping and highlighting a certain element of this past year in Counter-Strike: Global Offensive. This could include what matches were the best, the most improved player and other storylines we’ve witnessed as we head into 2017. The first installment will focus on this year’s best offline games, measured by both how exciting they were to watch, and how crucial they were to any ongoing or emerging storylines.

This game is one I can still vividly remember, even though it took place in March. It is easy to remember, because of Team Liquid’s woeful choke in the first Major on American soil. It was perhaps the most evocative game I’ve watched in Counter-Strike, as every match point Liquid lost you could almost envision their crushed faces at the prospect of failing to reach the Major’s Grand Final in their homeland, all because they couldn’t close out a game. Oh, and there was some pretty good CS too.

Team Liquid’s path to the semifinal alone was a shock to the community, as Major semifinals had almost exclusively been the realm of European teams prior to MLG Columbus. The North American (NA) side, bolstered with their inclusion of Ukrainian powerhouse Oleksandr “s1mple” Kostyliev, had already defeated one of the tournament favourites, Fnatic, so they came into their semifinal encounter against LG as a team with a fighting chance.

Everyone in the crowd was fully behind Team Liquid. Each kill was met with a roar. Each round win met with a rumble. A map win seemed likely to cause the roof to explode and the reaction to a series win was not even fathomable. It was the first American Major tournament. Team Liquid had beaten Fnatic already and had the incredible foreign talent of s1mple. Everything seemed to add up to a Liquid win.

The first map of the semifinal was going great for Team Liquid, with the NA team reaching a 15-9 scoreline on LG’s map pick of Mirage. Not only was the scoreline looking good for Spencer “Hiko” Martin and his boys, but their play was also at a top level, with every round win receiving an increasingly deafening roar from the home crowd. Mirage looked in the bag for Team Liquid, making us onlookers look ahead to Cache, a map the team had always been strong on, thinking it could be their ticket to the first American Major’s Grand Final. Team Liquid, however, were to be denied.

The hopes and dreams were shot down by Marcelo “coldzera” David, along with Jonathan “EliGE” Jablonowski and s1mple, as the Brazilian leaped up and, with one jumping AWP bullet, turned the momentum of Mirage in LG’s favour. 15-9 became 15-10. Ten became 11, and before long overtime was being played between the two teams. Team Liquid looked absolutely crushed; their play looked scattered. LG took the first four rounds of overtime and ultimately the map. Team Liquid lost six map points before allowing LG to win in overtime. It was hard to tell who looked more drained, the players or the crowd. Team Liquid had choked a huge lead on Mirage, but it was only one map, right?

Wrong. Although Liquid started off strongly on Cache, incredibly strongly I might add for a team who just lost what looked like a sure thing on Mirage, LG would find a way to wriggle into overtime once more. The score for Liquid was 15-6, on a home map, with a home crowd, nobody thought it could happen again. Slowly, map point after map point was squandered by Liquid, and the ever-cheering crowd’s chants diminished with each round loss. There was no hero play needed by coldzera this time, as Liquid just couldn’t close. Before long, Team Liquid allowed LG to even out the scoreline, 15-15. The NA side just lost nine map points in a row in the game that could see them exit the North American Major early, when two hours ago it looked like they could make history and win the tournament. When overtime started, it seemed inevitable. How could a player be fully focused on the game when they had just lost 15 map points across two games? And so, crushingly, Liquid exited the tournament in an impressive 3rd/4th place, but still too early for everyone watching. We all thought it was going to be an American dream for the Liquid boys.

The game that, in my mind, displayed to the world that Luminosity Gaming (LG) were future champions of the game was an absolutely thrilling game to witness live. The semifinal of one of the most prestigious Counter-Strike tournaments of the year started to heat up in the latter stages of the game thanks to an iconic clutch by Gabriel “FalleN” Toledo. Left in a 1v3 clutch situation with an AWP and 17 points of health, the round looked lost for FalleN, who had already picked up two kills that round. Yet, by some miraculous timing for FalleN, or dreadfully unlucky timing for Na`Vi, FalleN found himself on the A site of Overpass with the bomb while the Na`Vi members were at the other end of the map. The round that had looked lost for LG and crew started to look doable.

A fast noscope dispatched FalleN’s first foe, as the remaining two Na`Vi players rushed towards the ever-ticking bomb. While one started to defuse, Danylo “Zeus” Teslenko trained his crosshair on the stairs where FalleN would inevitably appear. Despite Zeus’ advantage, however, FalleN’s lightning reactions managed to flick his AWP scope onto the defusing Counter-Terrorist before Zeus could knock off the Brazilian’s remaining hitpoints. FalleN then scampered away from Zeus, knowing he only needed to buy time before the bomb exploded to win the round and make the score 13-13. Though Zeus killed him, Na`Vi’s captain realized he had no time to defuse the bomb, therefore surrendering the round and electing to save a rifle. FalleN had done it. With just 17 hp, he had won perhaps the most imperative round of the series after being left in a 1v3. Nobody could argue that this team wasn’t destined for greatness.

Another breathtaking moment happened on Overpass in LG’s 2-0 win over Na`Vi. and this is probably remembered more strongly than FalleN’s ace-clutch. It was, of course, Na`Vi’s triple boosts. Not once, but twice, did Na`Vi utilise an ingenious three-man stack to see angles normally enclosed to the terrorist team. What’s more, the European-mix team did it in overtime, throwing everything they had in the playbook at the stoic Luminosity Gaming. The triple-boosts were masterfully innovative, crafted with pure genius to open up rounds in previously unknown ways. LG’s strength is signified by Na`Vi’s failure to beat them on Overpass, despite throwing everything they possibly had the Brazilians who were soon to be World Champions.

To understand the significance of this win for the Brazilians, some context must be outlined. LG were a team slowly rising in the scene capable of, what were then, upsets against Tier 1 opposition. It was this semifinal in Katowice that showed just how capable FalleN’s squad was. Triple-boosts and 3v1 situations in key rounds weren’t enough for Na`Vi to put a halt to LG’s rapid rise to the top. FalleN and his team exhausted all of Na`Vi’s strategies on Overpass, one of their best maps at the time, showing to me and other fans that they had the potential to be more than one of the best. They were showing the makings of a Major-winning team. Not even a month after IEM Katowice, LG won MLG Columbus by defeating Na`Vi in the Grand Final. Their dominance of the scene may have started with their Columbus win, but their greatness began in Katowice.

LG’s third inclusion in all of my favourite matches of this year; the Brazilians have a way of playing games that make for top calibre viewing. Similarly to the previous game I highlighted, the Grand Final of the ESL Pro League Season 3 Finals witnessed the birth of a team that held Tier 1 status for a short time after. It took 143 gruelling rounds for Luminosity to finally quell the chances of G2 snatching a major international tournament from their grasp, and what a spectacle it was to behold. The reason it makes my list for best games of 2016 is partly due to the storylines it hosted, but mainly because it was the closest, most unpredictable and exciting conclusion to a tournament I’ve seen yet.

If you missed the battle of the titans that day and ever find yourself with a spare five or six hours (you’ll really need that long), I’d urge you to watch one of the finest finals ever played out. In spirit of how close the best-of-five series was, the first four maps were won by a different team after each map, and the deciding map was of course taken into overtime, before LG finally closed it out.

Some of the most memorable parts of the series included one of the smoothest one-taps Adil “ScreaM” Benrlitom has ever produced from his fabled AK. Lincoln “fnx” Lau went for a single jump-peak from the large box in Dust II’s CT spawn when, what had seemed like a smart play for information, turned into a premature death, as ScreaM greeted him with a clean one-tap as he barrelled out of mid doors. They certainly did talk about his one-taps that day.

The culmination of the Pro League Finals also displayed how the best-of-five Grand Final can sometimes pay off in abundance. There is usually some debate on whether or not it’s too strenuous on the players, as they may have to play five maps of immense quality. G2 and LG’s war across the series offered a benefit to the system. When two teams of equal strength meet, a best-of-five final is the most enjoyable viewing experience there can be, as it means more close games and more epic moments like ScreaM’s one-tap.

Storyline-wise, the Grand Final offered a challenger to the reign of LG that was in full effect by May of this year. Having won MLG Columbus and showing no signs of weakness, bar Dreamhack Masters Malmö which could be written-off as LG being complacent having won a Major not two weeks before, LG were considered favourites to win the Pro League Finals, which was stacked with Tier 1 teams like NiP, Fnatic, G2 and Astralis. Yet, G2 took LG to five hard-fought out maps, and drew into question just how strong the Brazilians’ hold over the scene was. LG’s reign was then challenged again by G2 a month later, when they took the rematch in their favour at the ECS Season 1 Finals. While G2’s form has since fizzed a little since their summer run, they are still seen as threats at tournaments because of the summer run. The run that began with their five-map series against LG.

What do you think were the best matches in 2016? Let us know by commenting below or tweeting us @GAMURScom.