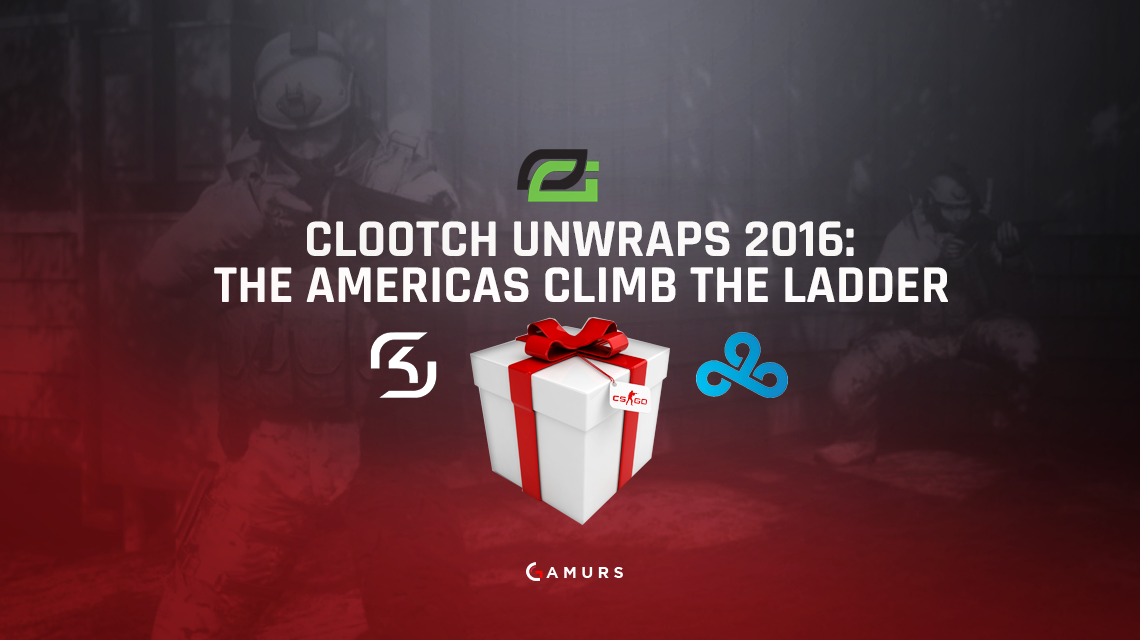 Welcome back to “clootch unwraps 2016,” a new series I will be starting in the build-up to Christmas and the New Year. I aim to release at least three of these articles a week, and each one will be recapping and highlighting a certain element of this past year in Counter-Strike: Global Offensive. This could include what matches were the best, the most improved player and other storylines we’ve witnessed as we head into 2017. The sixth installment will focus on the way this year played out in terms of how the Americas, North and South, showed a strong year with their tournament wins, opposing the common trend.

CS:GO has typically been dominated by the European teams in the professional circuit. 2015 was the year of Fnatic, the Swedish kings who won two major tournaments and handful of other prestigious international tournaments. Team EnVyUs, Virtus.pro and Team SoloMid all vyed for the crown that year too, and all of them are teams comprised of European players. 2014 holds a similar story, with none of the major tournaments being won by North American or Brazilian talent, and the majority of other prestigious events were dominated by the Europeans.

When thinking of the most dominant teams of all time, one tends to envision Fnatic at their peak when Olof “olofmeister” Kajbjer was the best player in the world, or LDLC, or NiP in the earlier stages of Global Offensive. It’s safe to say that the American continents have rarely had much presence in the upper portions of the scene prior to this year.

2016, by contrast, has been largely dominated by teams from American continents, ending the rule of European Counter-Strike and ushering in a new era. The North American style of play has largely been refined, with the puggy style they were once known for being succeeded by a tactical style that could compete with Europe. The South American teams, with main reference to SK Gaming and Immortals, have shown that they can comfortably play with the best in the world, and often beat them.

This year, the Brazilians who now make up SK Gaming, and Luminosity Gaming (LG) previously, have made history by being the first team outside of Europe to win a Valve-sponsored major tournament. Not only this, but the team made it a grand slam this year, winning both of the majors and leaving their mark on the scene.

There’s no doubting that this year has seen the birth of the “SK Gaming Era,” a term that has been used by people in the past to describe the dominance felt by other teams, such as Fnatic. SK won two major tournaments and had an absolutely rock solid record, such as their 17-0 win streak on the map Train. The Brazilians’ perfect fusion of world-class tactics and superstar skill levels has allowed them to comfortably claim this year as their own, as they won MLG Columbus 2016 and ESL One Cologne 2016, making them the only team to have won a major this year.

This is something I have covered in more depth in a previous article. Surprisingly, this year, South America hasn’t been the only American continent to claim some huge tournament wins. The North American teams have struck back against the Europeans who usually overshadowed them, making this a year where the European continent was inferior to the American ones.

The most surprising tournament result of the year by far was OpTic Gaming, a roster of four North Americans and one Spaniard, claiming the ELEAGUE Season 2 title over Astralis. The NA side was never thought of as possible winners of the title when the tournament began, but they slowly creeped their way past higher-rated teams to make it to the quarterfinals.

OpTic’s ELEAGUE path was immediately challenging for the team as their group saw them playing the likes of Team Dignitas, Fnatic and Team EnVyUs. The possibility was there for them, though, due to both Fnatic and EnVyUs going through periods of being unable to recreate the once-dominating results we saw from the teams, with both cores of the teams having won a major in the past. Also, Fnatic was forced to play with a stand-in for the duration of the tournament in the form of their coach, Jimmy “Jumpy” Berndtsson, in lieu of having Dennis “dennis” Edman. OpTic made use of these circumstances, and despite losing to Fnatic in the first matchup, claimed best-of-three wins against both EnVy and Fnatic. They had defied the odds, and made it to the quarterfinals.

Their route to the final was also seen as doable as they avoided having to play any real favourites to win the tournament, such as teams like Virtus.pro or SK Gaming. These titans were instead knocked out by teams OpTic would later go on to beat. OpTic defeated, in 2-0 fashion, both mousesports and FaZe Clan to advance to the grand final, which would witness them do battle with Astralis for one of the most prestigious event titles of the whole year. The finale featured two teams who weren’t consensus favourites to win the tournament at the start at all. It was truly a showdown of the underdogs.

The best-of-three final started in Astralis’ favour, as the Danes picked up the first map, which was their pick of Train, to push them one map away from taking home the trophy. Cobblestone was claimed by OpTic, leaving the deciding map to be played on Overpass. At this point in the series, I had Astralis down to win due to their past strength on Overpass when they were known as Team SoloMid. A monster performance from Keith “NAF” Markovic helped OpTic secure the map, and the series, with the player finishing the map on a HLTV rating of 1.85 and picking up 34 kills in the 27 rounds played. OpTic had done it. The strongest teams in the world had entered, and the primarily-American side had emerged victorious. Their win was a huge victory for NA since it came against the deepest pool of European talent.

The other great win from the North American continent this year came from fan-favourites Cloud9 in São Paulo, Brazil. The ending to the fourth season hosted by ESL boasted all of the best teams in the world, bar Virtus.pro and Na`Vi – which hurts the tournament’s credibility, yet was won by the much-improved of late Cloud9.

Unlike OpTic’s triumph at ELEAGUE, Cloud9 went through some very strong teams to claim their championship in Brazil. The group stage had Cloud9 pick up best-of-one wins over NiP and Team Dignitas, both teams in most people’s top-five in the world list. The biggest challenge for the NA side came in the grand final, where they were set to play against SK Gaming in front of a crowd rooting for the home side.

Cloud9 won the series against the former world champions decisively, taking their map loss to overtime and then closing out the last two games without allowing SK to reach double digit rounds. The NA side had proved to be much more than the broken team they were at the start of the year, blossoming under young Jake “Stewie2k” Yip’s leadership and turning over a new leaf for the team as they won a huge international event.

Cloud9’s and OpTic Gaming’s victories at events with the prestige of the Pro League Finals and ELEAGUE show that the NA teams aren’t as overshadowed by European behemoths anymore. Southern American SK Gaming also showed that the most dominating team of the year hails from a country outside of Europe. The iron-tight hold that Europe, largely down to it’s teamwork centric play style, once held over the world seems to be evaporating, with other nations swooping in to make all tournaments a balanced affair, no matter where the teams come from.

This is an exciting and balanced time in Counter-Strike.

What do you think about North and South America’s success this year? Let us know by commenting below or tweeting us @GAMURScom.