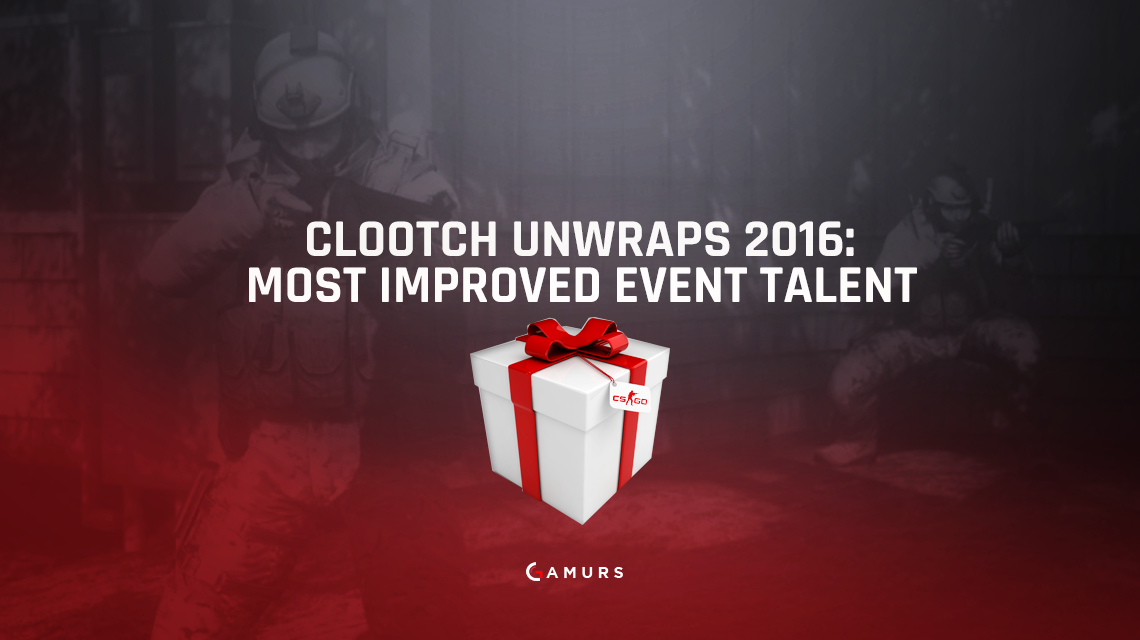 Welcome back to “clootch unwraps 2016,” a new series I will be starting in the build-up to Christmas and the New Year. I aim to release at least three of these articles a week, and each one will be recapping and highlighting a certain element of this past year in Counter-Strike: Global Offensive. This could include what matches were the best, the most improved player and other storylines we’ve witnessed as we head into 2017. The fourth installment will focus on this year’s most improved players.

The subject of event talent is something I wanted to touch on in this series simply because I feel that it is so undervalued. Often, when watching a tournament, the same analysts, desk hosts, commentators and observers are being broadcasted throughout the day, sometimes for lengthy periods of time when technical issues arise. Despite their hard work and the exceptional presenting we receive from them, they are rarely recognised with as much prestige as professional players.

While the players play, it is the commentators whose voices consistently articulate what is happening in the game, from the simple calls to more in-depth breakdowns of recent tactics and play styles. Our focus on one player is often dictated by the skilled observers who decide where the camera should be focused, and aim to capture all of the masterful game play on display.

After the game, analysts shed their thoughts on the match, explaining their valid thoughts on all of the action they witnessed beforehand. The ebb and flow of the analyst desk is decided by the desk host who manages what points are brought up and making sure they are as interesting to hear about as viewers have grown accustomed to. However, it’s the players who provide the community with the world-class Counter-Strike tournament after tournament, the talent plays a huge role in making sure it is a full package of entertainment enrichment.

This is why I wanted to highlight some of the talent that I feel has improved in all aspects of what they do over 2016.

Possibly the most lovable sellout in Counter-Strike, Machine has become, in my eyes, the most interesting and enjoyable desk host to watch. Knowledgeable about the game and an engaging presence, he brings the most interesting narratives up for conversation for the analysts to dissect for us. A few things over that Machine has done and continues to do has made me respect him even more.

Firstly, he is inherently skilled at promoting sponsors in an innovative and unique way when promoting theScore esports. Similar to Thorin’s partnership with AlphaDraft, Machine’s witty way of adding references to the company’s app is a fun way to view sponsorships and always adds an entertaining and humorous side to whatever match is being discussed. Memes, upcoming matches and current trends in the community are all used to add some personality to the promoting of a product (and such).

The ESL One New York event showed just how long the days of event talent can be, which Moses highlighted in a tweet. In it, he stated how Machine, Thorin and YNk had all been on the desk from 8 a.m. to 2 a.m. the following morning. That’s 16 hours, of which they would have had to be watching the games intently so they could provide a knowledgeable analysis of the match played. The quality that these guys broadcasted, despite being held up by delays, shows just how far they will go to produce a good show and really heightens my respect for them all.

YNk wasn’t very well received by the majority of the community, despite his excellent content, at the start of his breakthrough as an analyst for large-scale events. As brutal as Twitch chat is at the best of times, YNk endured more than the usual amount of baseless comments, which were mostly focused on how his voice bored certain people. Of course, had they actually listened to what was being said, they would have noticed YNk was giving great analysis, which was backed up by his own experience in the professional scene. Impressively for Paunovic, the trolls no longer laugh at him, as he has become such a staple figure who you expect to see at events now.

A testament to his talent as an analyst, YNk was picked up by caster/analyst collective RoomOnFire. He joins other figureheads of the talent community, like Anders and Semmler, under the brand, and deservedly so. Paunovic has become one of the more in-depth analysts in the scene and always provide interesting, insightful comments. Ridding the doubters that he had when he first came into prominence just speaks to how much he’s improved with his content, as those that once laughed, now listen.

Moses’ reference to the 16 hours that Paunovic and others were on the desk for is particularly significant for the analysts, Thorin and YNk, as throughout that whole day they had to be focused enough on the games to then speak live to the online and offline audience about it. It’s reasons like this that make me feel like the talent is so imperative to the tournament’s enjoyability for viewers like myself.

2016 saw metuz transform from “budget Anders” to a well respected member of the casting community. Hill was added to the RoomOnFire group at the same time as YNk due to his casting style that was slowly increasing his following. He has casted numerous DreamHack events this year, DreamHack Masters Malmö 2016 most notably, and has become a familiar voice to hear offering clear breakdowns of rounds and good play-by-play commentary.

A pair of casters I’ve found who match else other well is metuz and Lauren “Pansy” Scott, and they have been one of the less-known commentating pairs that casts with great synergy between them. I’ve been lucky enough to see them cast live and felt that they put on the kind of performance you’d expect from the more seasoned caster pairs. It will be interesting to see where 2017 takes metuz, given how solid this year has been for him.

What event talent members do you think improved the most this year? Let us know by commenting below or tweeting us @GAMURScom.