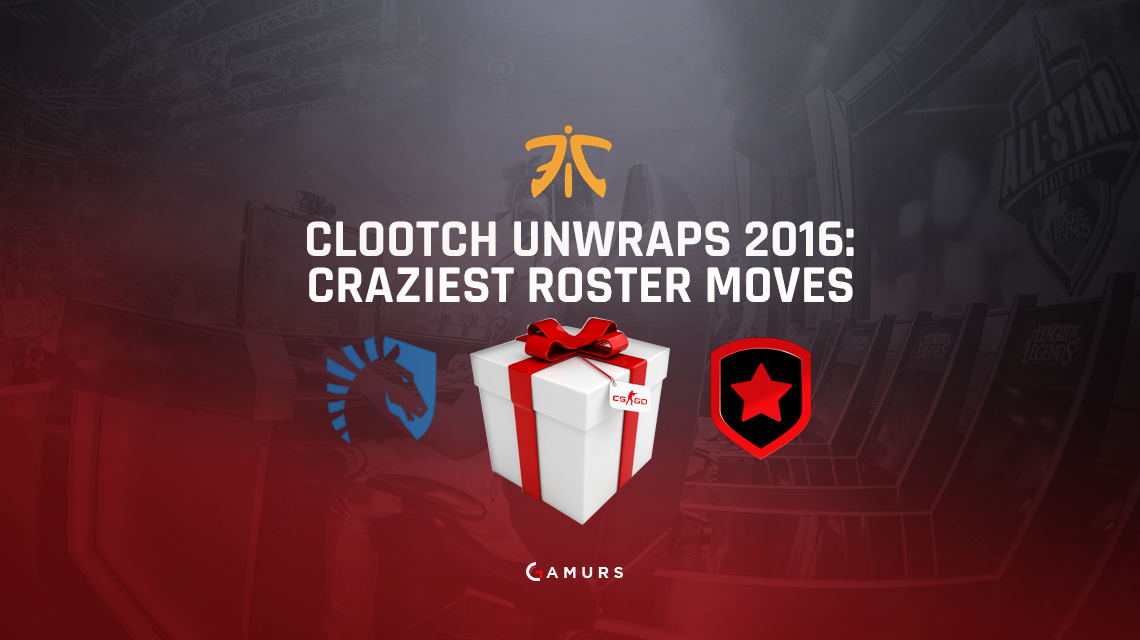 Welcome back to “clootch unwraps 2016,” a new series I will be starting in the build-up to Christmas and the New Year. I aim to release at least three of these articles a week, and each one will be recapping and highlighting a certain element of this past year in CS:GO. This could include what matches were the best, the most improved player and other storylines we’ve witnessed as we head into 2017. The third installment will focus on this year’s craziest roster moves, based on how unexpected they were and if it split up any veterans from their home team.

Probably the first thing you thought of when seeing the words “craziest roster moves” was the complete overhaul of two of Sweden’s most prominent teams. The move saw three players from GODSENT swap with three from Fnatic to create two teams that, on paper, looked balanced. A couple of things made this swap so crazy. Firstly, it saw the end of the fabled Olof “olofmeister” Kajbjer and Freddy “KRIMZ” Johansson duo. Secondly, splitting up the Fnatic roster that had won six international tournaments in a row since bringing in Dennis “dennis” Edman. It was a bombshell that the two organizations dropped on us, and there was no warning that it was coming.

The splitting of the iconic duo, KRIMZ and olofmeister, was a shock to the community above all else, as the pair had become so notorious for their beautiful and seamless teamwork. On all maps, Inferno in particular, the two Swedes had an unmatched synergy that made them one of the greatest power couples in CS:GO. Not only did the Swedish Swap dismantle the Fnatic side that had ruled for so long, but it also separated one of the most successful and potent pairs of players that this game has ever seen. The two have been reunited since the change, with KRIMZ returning to Fnatic, but it was mad to even contemplate the two players not holding banana on Inferno together when the news first broke.

Another element of the complete overhaul of the two Swedish sides that makes the swap seem so crazy is how, despite the incredible pool of talent in GODSENT and Fnatic, neither team has had any great success yet. Lurppis brought up a similar point on Twitter about how the swap dismantled one of the best teams in the world at that time, Fnatic, and didn’t replace them with a team of their level. Instead, two teams that look like they could reach the top echelons of the professional scene have been created, though they have yet to put up any solid results at events. GODSENT’s failure to qualify for ELEAGUE Season 2 through losing to ALTERNATE aTTaX showcases perfectly how the mighty have fallen.

Fnatic and GODSENT still have the chance to regain their former status’ in the future, but for now they remain the remnants of an empire that was seemingly broken by this shuffle.

On Jan. 2 of this year it was announced that Ukrainian star s1mple would be joining the North American side Team Liquid. The implications of this move were massive, primarily because s1mple would finally have a team of players who were similar to his level of play to excel with. Known as being one of the best individual players in the world with an immeasurable skill ceiling, s1mple promised to add a flare to Team Liquid that could spark a huge turnaround for their results.

Joining NA stars like Spencer “Hiko” Martin and Nick “nitr0” Cannella meant that the Liquid roster was holding immense firepower with s1mple’s arrival. This firepower enabled them to reach the semifinals of North America’s first ever Major tournament after beating Fnatic, former Major champions. We all saw s1mple’s impact on this result, with the Ukrainian picking up 37 kills across 41 rounds when Liquid beat a Fnatic side still at the height of its power. S1mple’s arrival in the NA side propelled them to a glorious finish at the first Major on American soil only a few months after the youngster joined the team.

The roster move was also significant for s1mple, who proved his raw talent could be translated to the big stage against the best teams. S1mple left his family, girlfriend and life to pursue his dream and fulfill the potential he so clearly had. His move to Team Liquid provided him with the legitimacy he needed to rightfully claim his spot as one of the best players, if not the best player. The move to Team Liquid was, in my eyes, what showed he had the potential to fit into a top team like his current home, Na`Vi, and continue performing his sick plays, like his notorious falling awp no-scope, against higher level opponents.

Team Liquid picking up s1mple proved to be an instrumental decision in their strong placing at MLG Columbus 2016, and also provided a chance for a skilled young player to prove himself on an established team.

What adds some element of craziness into this roster change is how, after adding Zeus to the team, Gambit managed to place first at an international event filled with other talented teams. The team won Dreamhack Winter last week after defeating another surprise finalist in the Grand Final, Renegades. Their win was not easily earned, as Gambit defeated Cloud9 and GODSENT in best-of-three series en route to the Grand Final.

Of course it’d be too presumptuous and simple to say that Zeus’ arrival in Gambit was the sole reason for their Winter success. The team was helped by strong performances from its three Kazakhstani players, as Abay “HObbit” Khassenov in particular played brilliantly throughout the tournament. Still, Zeus’ presence in Gambit is certain to galvanise their results under the seasoned leader’s tutelage, as hard as it is to see him without a Na`Vi jersey.

Only time will tell if the Na`Vi veteran will continue to bring good results the way of Gambit, which will be a surprising twist for the team who have looked lackluster since their great top-eight finish at ESL One Cologne. Gambit provide a challenger to the usual CIS powerhouses if they continue the kind of level they played at in Dreamhack Winter.

What do you think the craziest roster moves of this year were? Let us know by commenting below or tweeting us @GAMURScom.