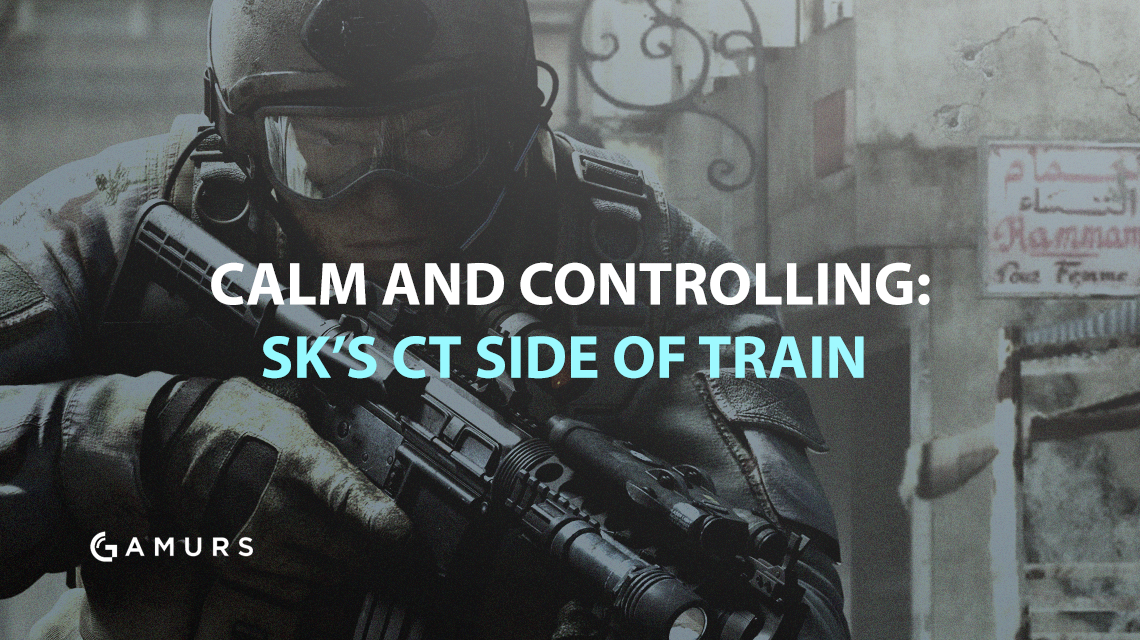 SK Gaming’s performance on Train has been nothing short of dominant. Their record on this map at the time of writing this is 21-1 over three months of play. Dominance to this degree is difficult to sustain due to the amount of data that accumulates. The more a team plays a map, the easier it is to pinpoint exploitable tendencies.

Despite this factor going against them, the Brazilians have continued to adjust their playstyle on Train and become difficult to read. This is shown in their ability to win both sides of the map, with the distribution of rounds won being exactly 50/50. However, in recent matches, the most notable aspect of their play is their impenetrable CT side. Let’s examine some aspects of what makes SK’s CT side so dominant.

Poor communication, late rotations, and over-rotations are all highly punishable on Train. Since the Terrorists have the ability to create fakes and quickly attack the other bombsite, it is paramount that a player’s communication and discipline of position be on point. That is where the viewers see SK’s pedigree on this map. Rarely do we see SK over-rotate without a definitive read on the opponent’s play. They are never impulsive but rather preemptive. SK’s rotations on the CT side usually depends on how successful their opponent’s are in attacking the B bombsite.

A key part of this appears to be Epitacio “TACO” de Melo’s communication and play from the inner bombsite. The default setup from SK is initially leaving TACO to solo the B bombsite and have a strong presence on the outside yard. In this 4-1 split, we commonly see TACO jiggle peeking the lower ramp to safely spot people entering the brown halls. This is the most common Train setup that we see from every high caliber team. Once TACO spots someone in the brown halls, he will generally fall back to

a safer position in the bombsite. This is where the efficiency of SK’s communication protocols shine. Instead of immediately reacting to the presence in brown halls, TACO only delays the lower ramp and doesn’t reveal that his upper is exposed by expending utility on that area. Only when he becomes worried about the possibility of someone walking out upper does he call for a rotation. He will also call for a rotation after his smoke fades on the lower ramp. This maintains the illusion that there could be more than one person on the site for as long as possible.

The Brazilian side is very poised and methodical when it comes to ascertaining information and respecting map control. Their desire to maintain four men on the outside yard for as long as possible is seen in their rotation timings. However, they aren’t overly greedy and know the possibilities once TACO relays that the other team has taken control of brown halls. Once this happen, generally Fernando “fer” Alvarenga will rotate inside and SK will maintain their 3-2 setup until the end of the round.

This is where Gabriel “FalleN” Toledo imposes his presence on the map with the AWP. He will usually go for a “shotgun style” AWP play, pushing into brown halls to meet the Terrorists coming down the
stairs. Usually, this is supported by a popflash and TACO holding his retreat. FalleN is generally successful in these situations and utilizes his movement to deny the trade-kill. After securing the first kill, SK has an 80.79 percent win percentage on the CT side.

The Brazilians’ greatest strength is their uncanny ability to change the pace at the right moment. Even if they haven’t conceded a round yet, they’ll always preemptively switch it up in order to throw off the other team. SK tries to mask their habits with accurate reads and calculated aggression. This makes finding the best opening a difficult task for the opposition.

The ability for SK to set the pace of the game and impose their will comes from how they play on the outside yard. Their playstyle applies a lot of pressure and punishes the lack of teamwork. As stated above, SK loves to play a 4-1 split because it enables FalleN to play a free-flowing role within their setup. Marcelo “coldzera” David is anchoring ivy and uses utility liberally to delay that point of contact. Lincoln “fnx” Lau controls the ladder/E-Box from either heaven or cubby, which donates FalleN a lot of space to work with. The SK captain is highly mobile between the hell and bomb-train area, and quickly supports his two anchors on the yard. His presence on the map often makes teams concede the T-connector area or the six-lane (Olof and hell) at the beginning of the round. Teams become fearful of donating an early pick, so they often slow their play down.

By not contesting these areas of the map, fer and fnx will capitalize and move aggressively behind smokes into olof and the E-Box area. This advanced setup not only allows them to listen for rotations, but puts them beyond the wall of any set smokes on the yard. In conjunction with coldzera’s trick smokes at ivy, SK will force you to fight for every inch of the map if you play too slow. However, if you play too quickly, you’re more often than not running into a four man stack on the yard, counter-flashes, and FalleN’s AWP.

There is nothing mindblowing or deviant that SK does differently than the rest of the field. However, SK executes their game plan more effectively and conditions their opponents into a false read. The incessant swap between aggression and passivity is difficult to play against and formulate a counter for on the fly. Train enables the strengths of the Brazilian squad in both the individual and team play realms of the game. SK constantly develops in order to disguise their habits on this map. As long as they continue to do so, their dominance on Train will continue into the new year.

What do you think makes SK so dominant on the CT side of Train? Let us know by commenting below or tweeting us @GAMURScom.