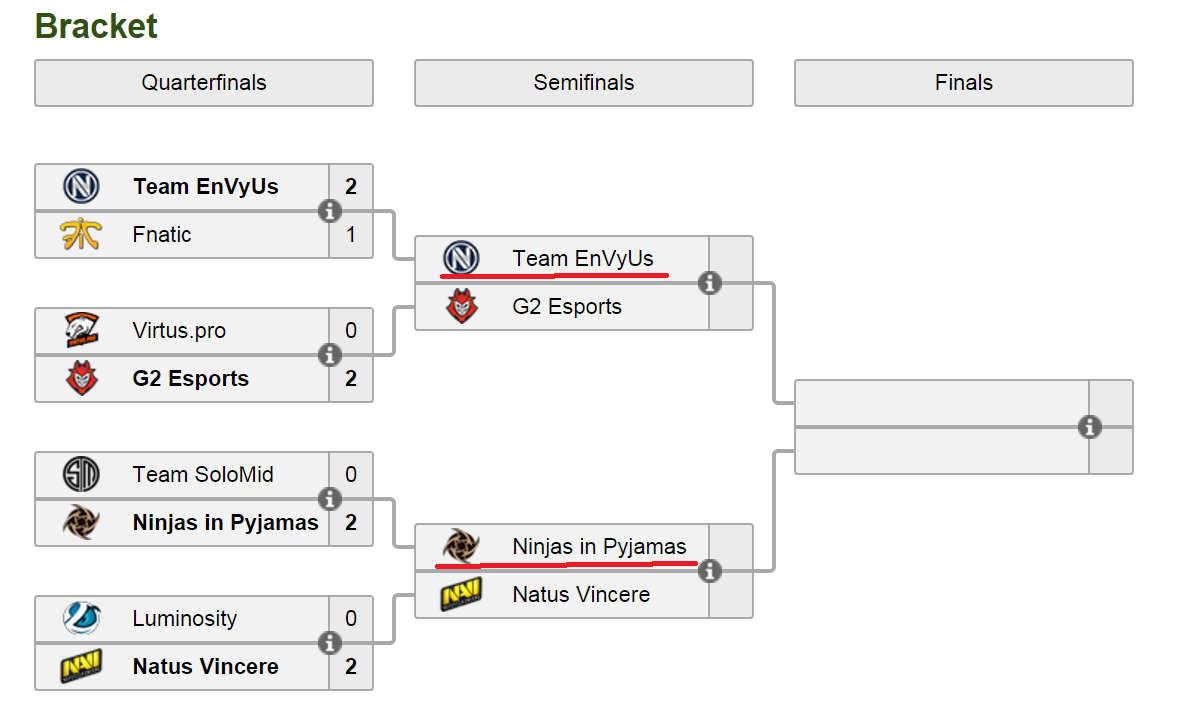 This tournament came out of the blue. Tarik mentioned that he was surprised about having to go to a qualifier for a major right after ESL Cologne. We spectators, like Tarik, are very surprised about this major. The teams that are here today should not have gotten here. NiP was falling apart. Gamers2 looked like it was over. TSM was supposed to win this. What happened to Virtus Plow? Fnatic lost to Luminosity? This is already a very unusual tournament. It is as if we are in another universe, and if you know anything about alternate universes, then anything can happen.

To start the day off, NV will play Gamers2. G2 should not have gotten here. Mousesports should have taken them out, and they were close to doing so. It is now starting to look like Mousesports cannot perform at majors. EnVyUs and Gamers2 have a similar map pool. They both do well on Dust 2, Cache, Mirage, Inferno. They’re both decent on Train, and NV is excellent on Cobblestone. Now, who will win these maps? Gamers2 is slightly better on Dust 2, and the game you saw in groups was against the best Dust 2 team in the world. G2 played well, but TSM played like gods, and as I said, no one expected TSM to go out in the quarters. Cache is a very good map for both teams, and it used to be a must ban for anyone playing G2. They beat some top tier Cache teams on it earlier in the year. Mirage is more of a G2 map than an EnVyUs one, and after NV played it so much, they might get wrecked on it because G2 has so much information. mouz is a good Inferno team, and G2 beat them. EnVyUs is an even better Inferno team, and they will have information on G2. It looks like they are countering each other every move. EnVyUs has the experience and the skill, so I think they will make it out of this one.

The next match will be between NiP and Na’Vi. Anyone asked about this matchup a few days ago would have called it boring, but now, Na’Vi has a real chance of losing it. NiP was considered a noob team on Train, but Na’Vi is one of the better teams on the map. Yesterday, NiP beat TSM on this map. They were a team resistant to change and never practiced it, but now, to win against the one of the best teams on it, TSM, blows my mind. I just cannot wrap my head around it. What happened? Na’Vi is unfortunately in a bit of a slump. Cobblestone has fallen off for them. They are just as CLG on the map, and CLG is not regarded as a top tier team nor a top Cobble team. Usually, one would say experience beats a hot streak, but not even TSM or their old rivals, now in the form of Titan, have a solution. Na’Vi autobans Dust 2, so NiP’s best map will do them no good. Cache is not a good map for Na’Vi either, but NiP made a monster comeback on that map two days ago. Overpass will have to be a ban for NiP because they don’t play it, but then again, apparently, they are good on Train, another new map. Inferno is probably a map Na’Vi will want to go towards, yet that was a crutch for NiP as they were declining. I would edge Cobble to Na’Vi considering their history. NiP may be able to take Train, but Na’Vi has Mirage locked down. As far as predictions for the winner go, I think NiP will win it because they are on a run of form, making them an explosive team and a team Na’Vi has not seen or experienced. If you were planning on having a food break for a game in this match, then you are sadly mistaken. This is going to be a great series.

This may be the craziest day for Counter Strike for the rest of the year. If you aren’t glued to your seat, then you aren’t human.