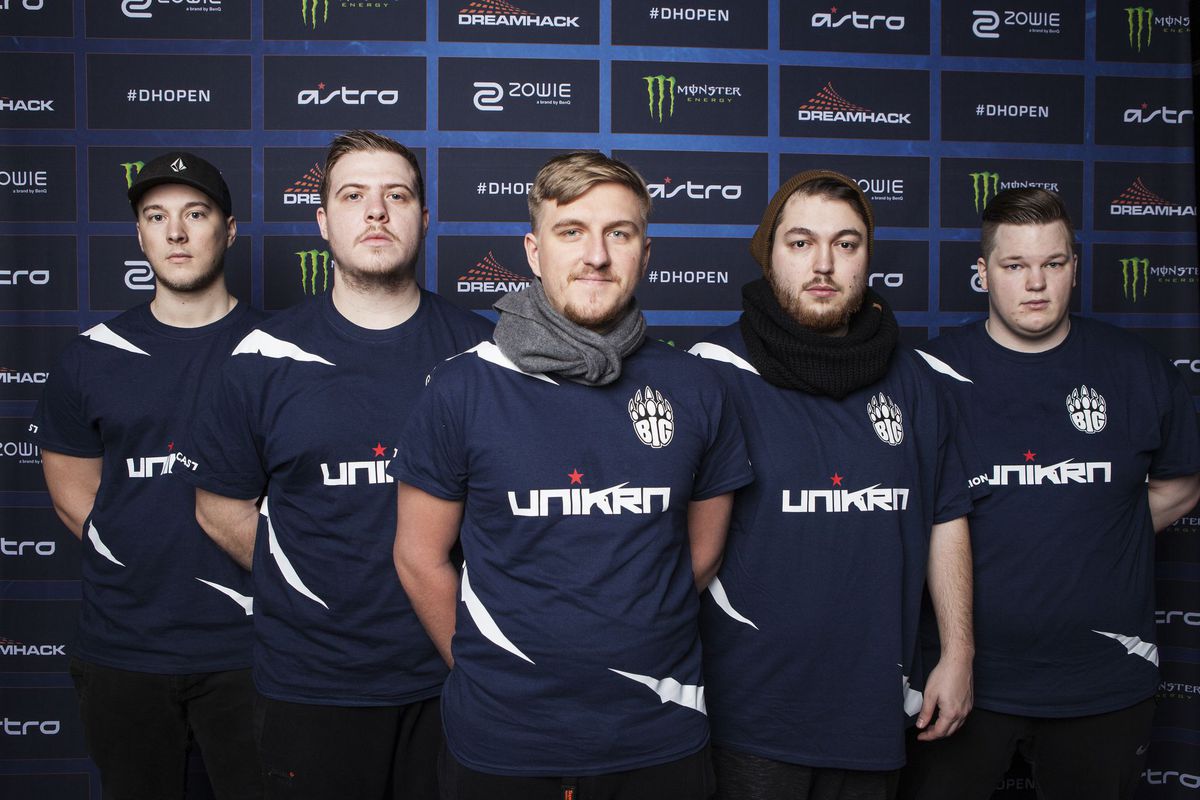 SK versus BIG was the stuff of legends. Against all odds, a seven month old team mounted an unbelieveable 10-5 comeback against the best team in the world.

That game would pit Gabriel “FalleN” Toledo, often hailed as the best leader in Counter-Strike versus Fatih “gob b” Dayik in a high-stakes chess game on Inferno that would see intelligent reads, nail-biting executes and ballsy plays.

The German squad’s 3-0 sweep at the PGL Krakow Major was a surprise to most, especially to the three top-five teams they defeated.

BIG’s unlikely triumph over SK shocked analysts and fans alike and secured their place as legends at the next major. But where did this German juggernaut come from?

It is a wonder that BIG came together at all. In late 2016, the trio of players that would form the backbone of BIG—gob b, Johannes “tabseN” Wodarz, and Nikola “LEGIJA” Ninić—were teamless. They’d just been let go by NRG after a string of bad results, and now they were headed back to their home country of Germany to see if they could restart their careers.

Gob b needed a dependable rifler who would fit into his tactical system. He looked back to his time with mousesports and recruited Johannes “nex” Maget. Nex was not an obvious choice. Once the shining star of the German side, nex found himself struggling to replicate his peak performance from the summer of 2015.

Needing an AWPer, the team turned to Kevin “keev” Bartholomäus. He’d made a name for himself with his aggressive style at ALTERNATE aTTaX. But there was a problem. Nex and keev remained under contract. To complete the dream team, the player-owned organization paid both buyout fees—a tall task for a startup.

Even with those additions, the team might have found itself leaderless. Cloud9 made an offer to recruit gob b back when he was with NRG. But he turned down the opportunity to play for one of the most prominent North American teams. “I was really happy at the time with NRG because I love the team so much, I still do,” gob b said at the PGL Krakow Major.

That gob b did not join Cloud9 is remarkable when you consider the rough ride that was NRG.

New investors and sports giants allowed North American organizations to try something different in 2016. If the best players in the world come from Europe, then why not bring some of that talent to America?

NRG injected European talent in early 2016 by signing former mousesports players gob b and LEGIJA with the acquisition of the former Method roster. Seeking firepower after months of poor results, NRG again looked overseas to tabseN. Another mouseports alumni, tabseN had made a name for himself as an explosive fragger for PENTA.

The move made sense. Collectively, the Germans had earned two Meisterschaft titles in 2015, and placed second at multiple events including CEVO Season 8 and APM Masters. On paper, NRG was poised to make an impression in America.

But the European experiment failed—spectacularly. Aside from a semifinal at Counter Pit, the team never made an impact on LAN. The attended six more events that year, never making it out of groups. Citing a desire to build an all-American team, NRG dropped the German trio at the end of 2016.

Back on home soil, BIG didn’t spend a lot of time looking in the rearview mirror. NRG’s cataclysmic season was over and the Germans were ready to test their mettle with a shiny new team.

BIG exploded onto the scene with a dominant showing in ESEA Premier and a second place finish in the Mountain Dew League Global Finals thanks to breakout performances by tabseN. That victory came on the heels of an impressive finals run at Dreamhack Leipzig and first at ESL Meisterschaft Spring 2017, gob b’s first German title since the summer of 2015.

In the span of five months BIG earned spot in ESL Pro League. They defeated Virtus.Pro 2-0 and defeated German rivals PENTA in relegation. It was here that the squad found success on Inferno, owing two wins to their tactical approach and map control.

Road to the major

Secure with their Pro League spot, BIG’s quest for the major began in Bucharest. Despite a rough start against Dignitas, the Germans came back from the lower bracket, besting Dignitas and EnVyUs and dominating PENTA in the final. TabseN topped the charts with 102.8 ADR and a 1.52 rating as BIG secured pole position and a shot at the stacked major qualifier.

TabseN stood out again at the PGL Major main qualifier, with a 1.32 rating across four maps. But it was gob b who dominated in a 16-9 victory over Immortals on Cache. BIG exited Swiss Groups 3-1, only giving up a map to Cloud9, the only American team to qualify for the major.

On paper, BIG had the hardest path to the playoffs. In their perfect 3-0 sweep, the squad upset three top-five ranked teams in FaZe, Cloud9 and the undisputed best, SK. TabseN and nex closed the tournament as the third and seventh top-rated players despite a loss to Immortals in round one.

That path was simplified in two ways. FaZe was simply not in form. Finn “karrigan” Andersen’s team was considered the second-best team in the world. Moreover, the map was Inferno, very likely FaZe’s second best map. An 8-16 loss was unexpected to say the least.

And then there was the infamous jump-bug, a powerful glitch allowing players to peek into areas without risk. It undoubtedly gave BIG an advantage against FaZe and Cloud9. Those results might be called into question were it not for the 11-round comeback against SK Gaming.

In that grueling fight, BIG honored an agreement not to use the bug and did the unthinkable by beating the two-time champions on level ground.

SK closed the first half on Inferno 10-5 by countering gob b’s execute-heavy tactics by switching aggressive mid holds with defensive plays that would see Marcelo “coldzera” David hiding deep in A site. Unable to beat the Brazillians at A and unwilling to deal with FalleN’s AWP at B, BIG could only muster two gun rounds. It appeared to be curtains for the Germans.

Charging down mid, BIG caught SK off guard with a second pistol win. What followed was a series of good reads and effective rotates. Ever the patient captain, gob b bought time for tabseN and LEGIJA’s cleanup by repeatedly choosing not to make a play from pit. It was tabseN who closed the game 16-14 with a 2K from arch and a quick rotate to B to finish the round with four kills.

BIG couldn’t overcome Immortals in the playoffs despite a hard-fought best of three seeing specific counter strats on Inferno and a narrow 14-16 loss on Train. But it didn’t matter. BIG had beat three top five teams and proved their worth against Immortals, the major finalists. In the span of seven months, the unlikely upstart had gone from obscurity to legendary.

Update Aug. 4, 5:28pm CT: We have made a geographical correction to this article to note that the players on BIG are German, not Bavarian.