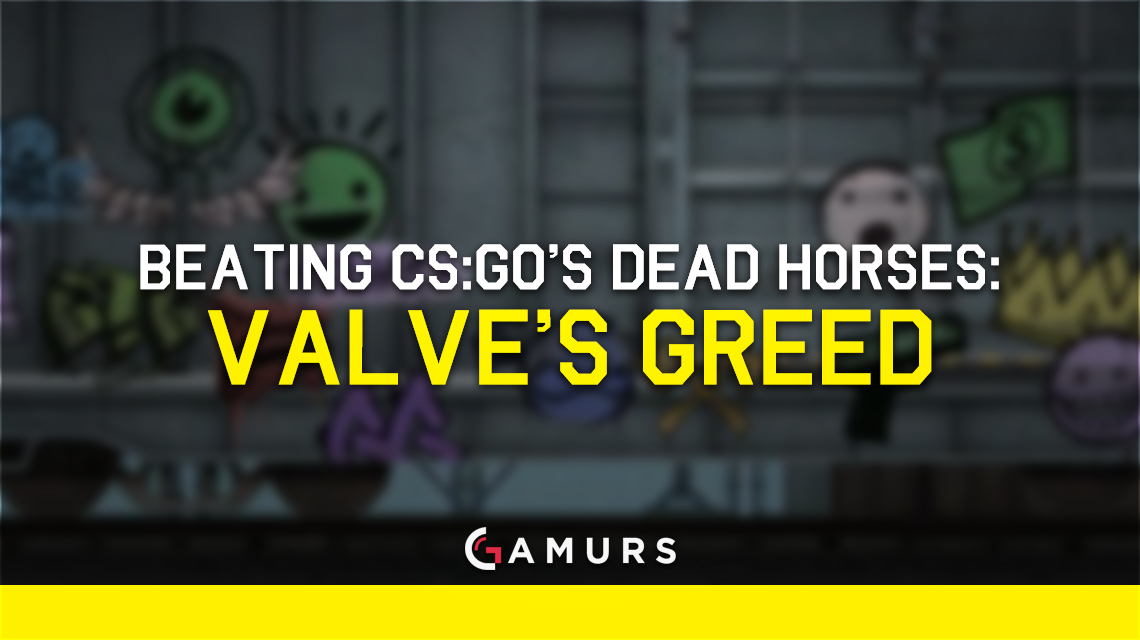 When I opened up my game last night to the surprise of “Graffiti | Still Happy (Battle Green)” in my inventory, my thought processes in the passing minutes were a convoluted mess.

Make Your Mark
OCT. 6, 2016
Introducing the graffiti update, which provides the ability to mark up your world with a wide range of graffiti patterns now available as drops and through graffiti box offers.

“What the hell did Valve do now?”

[Graffiti]
– Added ability to apply graffiti.
– Added Community Graffiti Box 1 to offers.
– Added CS:GO Graffiti Box to offers.
– For a limited time, every player will get a graffiti pattern when they launch the game.
– Added sealed graffiti to the list of possible weekly drops.
– Graffiti FAQ

“Oh cool, they added sprays, kind of like the ones from their past games. Wait, you can’t customize them? That’s really dumb, but I guess that’s reasonable because of the possibility of inappropriate sprays. Let me read more about it.“

It’s time to make your mark with a wide range of graffiti patterns now available as drops and in graffiti boxes as offers. Graffiti can be applied to the in-game environment wherever you want, so use your imagination and decorate the world for yourself, your friends, and (when the opportunity presents itself) your enemies. Check out the Graffiti F.A.Q.

“Hm, they make it sound so unreasonably pleasant and almost as if they’re doing this community a favor. I mean, this has been in their past games, so adding it shouldn’t have been much of a problem. Let’s see what the F.A.Q. has to say.”

– How do I get in-game graffiti?
There are three ways players can get in-game graffiti:
1. Players have a chance to receive graffiti as a free weekly drop for ranking up.
2. Graffiti boxes featuring art created by Steam community artists can be purchased. A portion of the proceeds from sales of community graffiti boxes is shared among the community artists.
3. Individual graffiti patterns can be purchased from the Steam market.

“Damn, they’re monetizing it in the same format that they’ve monetized skins from cases. I’m really hoping that this doesn’t set a precedent for other new cosmetic updates to this game. The last thing Counter-Strike needs is another type of market surrounding pixelated designs.”

– How many times can I use a graffiti pattern?
When a player unseals graffiti, they can apply that pattern 50 times. Players who unseal a graffiti pattern they already have in their Inventory will receive 50 additional charges to their existing supply.

– How long does my graffiti last?
One application of graffiti lasts seven minutes and degrades over time until it is no longer visible.

“Okay, this is too far. Why does a player only get 50 uses per spray? This is a damn video game; why does the realism of running out of spray paint have to apply only when Valve feels like it? If that same premise were applied to gun skins, my precious AWP | Asiimov skin will go away after 50 kills because of the amount of usage over time. It’s almost like Valve isn’t even trying to hide their greediness anymore.

Did you unbox an expensive knife with nothing but $2.49 and a jackpot-ton of luck? Don’t worry, Valve will make sure they get the better end of the stick by giving it a hefty 50 uses. You have better chances of being struck by lightning than you do unboxing another knife. Don’t worry, Valve will probably end up trying to profit off of other great features, such as prime matchmaking.”

“If you get a skin you don’t like, have no fear, the Steam community market is here. Valve will generously keep 15 percent of whatever graffiti you don’t like when you sell it to other people. The biggest caveat to this whole exchange is that you can’t trade or sell your unsealed graffiti to other people. That seems totally sensible. You shouldn’t be able to sell a spray can to someone else when you’ve used half of the spray can already, right? You shouldn’t be able to sell a car to someone when you’ve already used half of the car’s life expectancy, right?”

This recent stream of consciousness regarding CS:GO can seem somewhat irrational. I angrily typed this up after I noticed how annoyingly ubiquitous the sprays have become in such a short period of time since its genesis. I also have misophonia, so the graffiti noise is naturally disturbing to me.

I’ve played Counter-Strike: Global Offensive for over a year now and I’ve clocked in almost 1,000 hours passionately playing this game. Within this community, I’ve witnessed team dynasties rise and fall. I’ve witnessed new meta strategies being implemented at various ranks and in the professional scene from game updates. I’ve seen the Active Duty map pool change drastically. I’ve ridiculed the dumb rule changes being imposed on team coaches that have cost them their jobs. I’ve been a part of six cycles of introduced gun skin cases that are becoming more of an upward trend. But out of all of these changes, there’s one constant that plays like a broken record in the back of my mind – Valve is still a business. For instance, they stopped skin gambling due to the increasing public knowledge of the controversy (AKA, they were covering their ass).

Valve will continue to act like a business as long as we support them in their capitalist endeavors. In order for us to be treated more like an esports community and less like a cash-cow, we need to find a way to communicate to Valve that they need to stop focusing on what’s superficial and to give some regard to what’s below the surface. Valve can give the community all of the sound changes and cosmetic features that they’d like, but it still isn’t enough to satisfy the community’s thirst for the overall improvement of Counter-Strike.

We as a community need to stop salivating at the thought of a new case, a new knife, or a new sticker capsule. We need to stop showering Valve with our hard-earned dollars in a game worth $14.99. I myself am not innocent when it comes to buying skins and cases, but it’s worth mentioning that I’ve realized the game that Valve is playing (or at least what I think they’re playing). When they notice that there’s a price decrease in Steam market sales and case openings, they’re bound to introduce more cosmetic changes. When Valve’s ideas are actualized, they easily flourish because we blindly support them. As long as there’s money to be made from Counter-Strike, they will continue to milk us like animals.

What do you think about the introduction of graffiti into CS:GO? Let us know by commenting below or tweeting us @GAMURScom.