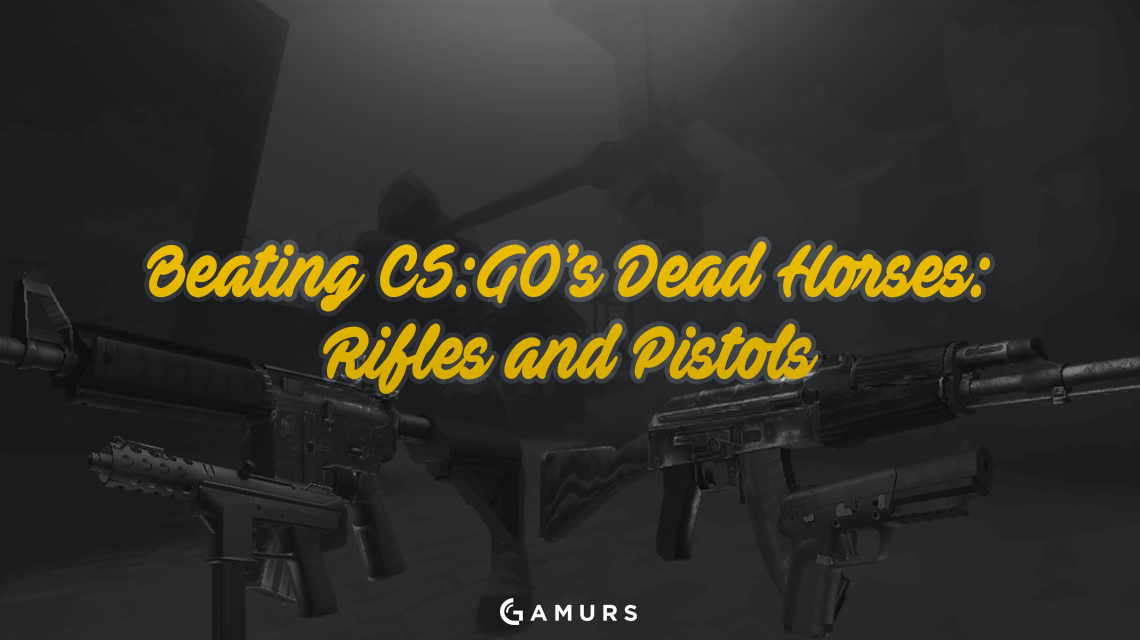 I like to believe that Counter-Strike: Global Offensive is a skill-based game, but there are times when my beliefs are called into question by Valve’s blatant disregard for the community’s opinion. This is why I’m starting a series called “Beating CS:GO’s Dead Horses” to possibly bring attention to the glaringly obvious issues that the Counter-Strike community consistently voices on reddit.com/r/globaloffensive. Counter-Strike struggles to reach its full potential in the esports ecosystem because of their plight with Valve, the creators of CS:GO.

I’d compare Valve as a sort of significant other that only loves us (the community) when they want something. They only pitch effort into the relationship when they feel like it and when it’s convenient. When we feel the necessity to rebel against them, they’ll shower us with “love” and compassion in ways that pleasure us enough to fall back in love. The community’s relationship with Valve seems abusive, but we are too in love with what they bring to the table to unionize for a change in Valve’s regard for us. They provide us with two to three majors per year with large prize pools. They give us new cases to open and embellish our inventory. They refresh the Counter-Strike experience with new operations every few months. They can give us all of the chocolates and flowers that they please, but they have yet to give us the routine kiss goodnight that we so desire.

Some substantial additions that Valve have yet to make seem almost commonsensical.

The popular Terrorist (T) AK-47 has the ability to “one-tap” an enemy with a helmet from any range. It’s termed “one-tap” because one trusty bullet can neutralize an enemy with ease. The AK-47 is commonly picked up mid-round by Counter-Terrorists (CT) because it’s apparent that their weaponry is inferior. My biggest gripe about CS:GO at the moment is the imbalance in damage between pistols and rifles.

Headshotting is the true test of raw aiming ability in duels and engagements.

In the above graphic, you can observe that four of the eleven rifles do not kill an enemy with one headshot. The M4A4/M4A1-S rifles that players on the CT side primarily wield deal 92 out of 100 damage to an enemy opponent’s head. The Terrorist Galil AR rifle also yields 92 damage with a headshot, while the CT FAMAS rifle deals 83 damage to the head. These rifles are the go-to guns for buy round situations. The stark contrast between the AK-47 and those four rifles is baffling. I understand the FAMAS and Galil AR’s incapacity to one-tap because they are significantly less expensive and generally deal a lot less damage, but that incapacity applied to the M4A4 and M4A1-S is absurd. When on the CT side, players shouldn’t be burdened with a more demanding economy and less effective rifles that are unreliable in dire situations. At that point, they’re better off using the AUG, a scoped rifle that costs more and may cost the CT player a possibly important grenade or even more important defuse kit. These incremental differences snowball into larger issues that cost teams rounds and possibly even matches.

In this next graphic, you’ll notice that six of the ten pistols have the ability to one-tap at close range. The P250, CZ75-Auto, Five-seven and Tec-9 should not be able to one-tap at any range whatsoever. Teams should not be rewarded with low-risk, high-reward weapons that have viable headshot damage values when they are on economy rounds. Eco rounds should be more of a punishment for not being able to win buy rounds. The highly-regarded “Tec-9 Rush B” (or Five-seven CT rush) strategy for every map should not be a more consistently effective eco strategy than a $4,000-$7,000 buy round for the opposing team. If players can spam a $500 pistol and one-tap a rifler holding an angle because their rifle can’t one-tap, then there’s an obvious imbalance in the damage between the two types of weapons. This creates a meta that rewards aggressive, less methodical strategies over passive, more tactical styles of play. It almost seems that players on the CT side should resort to utilizing pistols as their main weapon for buy rounds because of their head-shotting capabilities, but those head-shotting machines are not as practical in aim-duels against AK-47s.

This clip is too relevant.

As a side-note, the Desert Eagle and the R8 Revolver headshot values should remain the same because they are horribly inaccurate and they are a high-risk, high-reward weapon choice for eco rounds. One-tapping (or “Juan Deaging”) with these outlier pistols requires much more skill from the user.

The AK-47 is arguably the most viable weapon in CS:GO. When rifles such as the M4A4 and M4A1-S are able to match the heights that the AK-47 can reach with one bullet, then that will be the time when holding bombsites will become easier against five-man pistol rushes. Until then, let’s continue to get tapped by $500 pistols on buy rounds.

Headshot damage values were collected from this site: