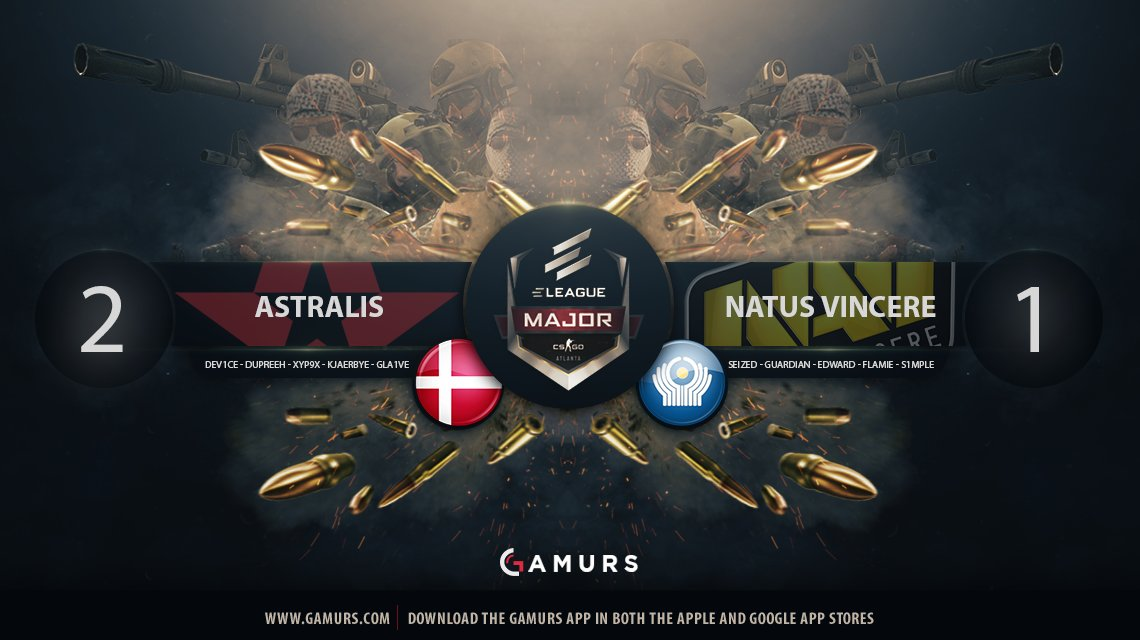 The first day of the ELEAGUE Major playoffs kicked with Na’Vi taking on Astralis – a matchup fit for a grand final, though this was only in the quarterfinals.

The picks and bans went as follows (courtesy of HLTV.org):

Overpass began with Astralis on the T side, and a rather slow pistol round led to a flurry of frags into the late round. Thanks to two entries by dev1ce, Astralis was able to swarm the A bombsite and secure the pistol round for themselves. This round win gave Astralis the momemtum they needed, as they picked up the following four rounds in a row before Na’Vi finally responded back with a round of their own. Astralis immediately reset Na’Vi, thanks to a well-played three-on-two by gla1ve and Kjaerbye. After another two round wins by Astralis, Na’Vi was forced to take a pause. Winning one CT round was nowhere near enough, and they needed to change up how they were playing to have a chance to get back into the map. Meanwhile, dev1ce was boasting an ADR of 131, absolutely crushing Na’Vi’s defense.

Na’Vi, still on a save after their pause, chose to take matters into their own hands – flamie in particular went absolutely massive for his team with three Desert Eagle headshots to convert the eco round. Astralis, still unrelenting, reset Na’Vi once again, and defeated Na’Vi’s forcebuy in the following round to put them into double digits on their T side. After polishing off an anti-eco round, Astralis fell to a stellar B site hold from seized, as he picked up four kills to secure Na’Vi their third round of the half. Ever consistent, Astralis replied back once again by taking the last round of the half for themselves.

The second pistol round of the match was incredibly critical for Na’Vi to pick up, and they did just that; unfortunately for them, two deagle kills from dev1ce and three kills from dupreeh allowed Astralis to win the ensuing forcebuy. Now almost certainly out of the map, Na’Vi needed someone to step up for them, and flamie did just that by securing four frags for his team, and picking up another three in the following round. Na’Vi then secured another round for themselves, but the following gun round was denied to them by Kjaerbye, who picked up three frags by himself to put his team just a mere two rounds away from closing out the map. The momentum from Kjaerbye’s three kills pushed Astralis to pick up the last two rounds of the game, with dev1ce grabbing four AWP frags on the last round to close out the match.

A quick B split on their T-side pistol gave Edward and flamie the opportunity to secure two kills apiece for Na’Vi, and flamie continued his form from the previous map by picking up another three kills against Astralis’s force-buy on the following round. The next five rounds also went Na’Vi’s way, allowing them to work their way up to a 7-0 scoreline until Astralis finally picked up a round of their own. Astralis now needed to string rounds together, but Na’Vi immediately reset them thanks to a one-on-two clutch from seized. The next two rounds also went Na’Vi’s way as Astralis struggled to bring their economy back under control, but the conceded rounds were worth it, as Astralis picked up the remaining five rounds of the half to cut Na’Vi’s lead to just 9-6 going into the second half.

Astralis chose a more tactical approach for their T-side pistol, smoking off stairs and jungle, followed by a push into CT. This proved to be a flawless call from gla1ve, as Astralis didn’t drop a single player and continued to dominate the next two rounds while Na’Vi saved up for their first gun round. A slow B play from Astralis gave them that gun round, but a force buy around two saved weapons yielded Na’Vi their first CT round of the map. Unfortunately for them, a beautiful mid-round call from gla1ve in the following round aided Astralis in winning a two-on-two, and with that reset Astralis made their way to a 14-10 lead. A pause from Na’Vi gave them a chance to make adjustments, and they paid off – Na’Vi won the next four rounds, evening the score for the map. The round for match point seemed to favor Astralis, as they secured a two-on-four, but the bomb plant was denied by a last second peek by s1mple granting Na’Vi match point. The final round of the match came down to a one-on-two post-plant for Xyp9x; alas, despite having great positioning that went unchecked, he was unable to convert the round and Na’Vi took map two.

After a disappointing end to Mirage, Xyp9x clearly felt like he had to make up for his failed one-on-two – a heroic four kills from him, including a one-on-one clutch, gave Astralis an early lead. This allowed Astralis to work their way up to a 4-0 lead, but a grenade stack at long did so much initial damage to Astralis that three of them fell to seized’s P250, resulting in a round win due to the time running out. Na’Vi did manage to pick up the following round to avoid a reset, but fell once again to entries by Astralis. The ensuing round also went Astralis’s way, but yet again in the following round they fell to P250s and a saved AWP to give Na’Vi a chance to get back into the game. Na’Vi took the opportunity handed to them by stringing together five more rounds until Astralis ended their streak by picking up the last round of the half to bring the score to 8-7 in favor of Na’Vi at the half.

An extremely back and forth second pistol round led to a two-on-two post-plant on B site for Na’Vi, which they closed out to extend their lead. Three Desert Eagle headshots by dev1ce on a force buy, however, swung the momentum back in favor of Astralis, and they proceeded to convert the following round despite Na’Vi’s force buy in return. After a relatively clean anti-eco, Astralis looked to pick up the first full gun round of the half, but a phenomenal one-on-two clutch by s1mple gave N’aVi a round they direly needed. Alas, Na’Vi’s celebration was short lived, as Astralis efficiently locked out the following round – not a single player died, and Na’Vi was forced onto a double save. Astralis did pick up both anti-ecos, though the second was incredibly sloppy and was only won due to Kjaerbye picking up four stellar kills. The rest of the match was all Astralis, as dev1ce and Kjaerbye laid waste, picking up frag after frag to win the map for Astralis 16-10.

Astralis will move on to play the winner of Fnatic versus Gambit Gaming in the semifinal tomorrow, and Na’Vi has been knocked out.

Did you expect Astralis to win this series? Can they win it all? Let us know your thoughts in the comments below or tweet us @GAMURScom.