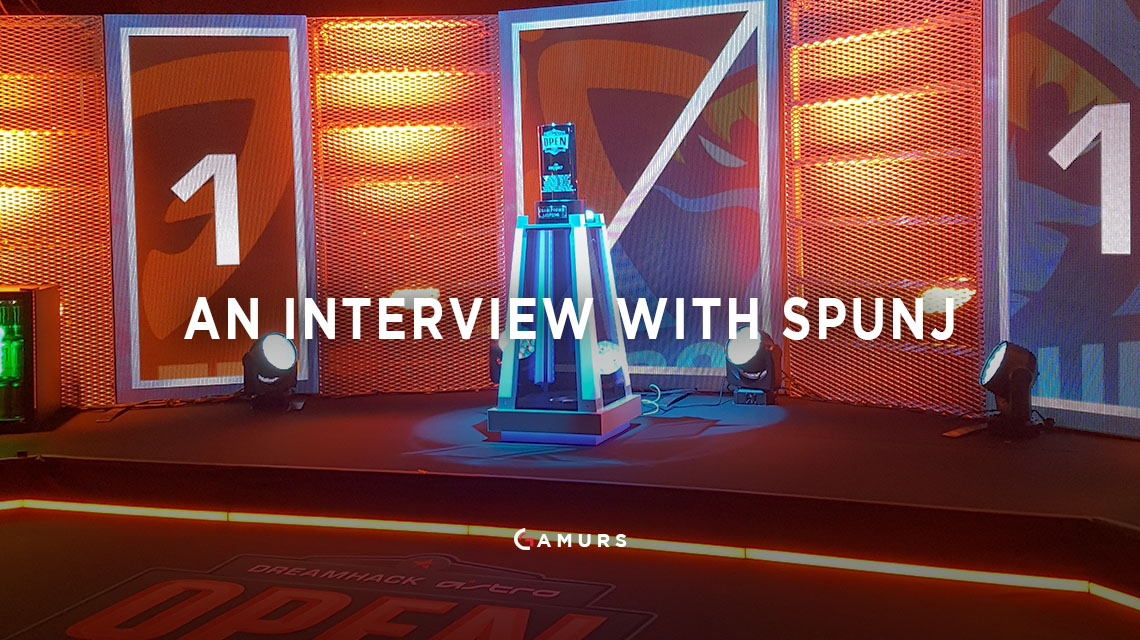 At the DreamHack ASTRO Open event in Leipzig, Connor Bradley and I had the chance to speak to Chad “SPUNJ” Burchill prior to the games starting. We question him about the Australian scene, the event itself and other topics.

You’ve played nearly every role in the game there is, playing for and being the in-game leader for Renegades, most notably. Now that you’re an analyst/caster, how have you transitioned to this position?

“It was quite easy going from a player/in-game leader to an analyst; I always liked talking and used to do the interviews for my team, so going into this role didn’t involve too much of a transition, it’s just a different environment, having to go and stand behind a desk with makeup on.”

Your old team, Renegades, failed to qualify for the ELEAGUE Major. What are your thoughts on this and what do you think they can do to pick themselves back up?

“So, when I was on Renegades, it slowly transitioned away from the Vox Eminor days with topguN retiring and replacing Havok. This kind of got rid of the heart of the team. Then, for me to retire and leave the team, which sucked and wasn’t easy to do, but the team wasn’t the same when I loved it and when it was Vox Eminor. I think this is the problem they’re struggling with at the moment. It’s not that they don’t have a leader, they don’t have an emotional leader in their team. This used to topguN, Havoc or myself, and they need somebody who can bring them that, and I feel this needs to come from some of the more veteran players like AZR. I think if they get on top of that, and get some momentum back, they can be a really powerful team, especially with their new coach, Kassad. He can help them with their direction, and I guess replacing a coach is the new alternative to replacing a player now. This move will hopefully help get the team’s spark back. I think they should have a good 2017 because I liked what I saw from last year.”

Recently there was some controversy in the Australian Scene with semi-professional player Jamba caught up in the suggestion he was trying to find team cheats, due to the reveal of Skype logs. Has cheating been a prominent issue within Australia before?

“So, in Australia, we try and moderate cheating ourselves through demo reviews, like CyberGamer does. This is somewhat ineffective though because it can’t be 100% conclusive. InfrequeNt, who plays for Tainted Minds (previously Atletico), received a ban from CyberGamer for cheating, but was then unbanned because it was only based off demo review and there was no proof because he wasn’t cheating. Now, in the scene, it’s much harder to pinpoint people who are cheating because there is no proof like a Vac ban or a ESEA ban. I think a lot of scenes have cheating in the low-levels of CS, some just do it more blatantly.”

“I think in 2017-2018 teams can probably stay in Australia and be successful and become a professional team. I think we’re seeing more growth in Asia and the more events Australian teams can attend in Asia is good for the region. Sponsors are becoming more and more involved in the region, and we’re seeing more money coming through, but it’s been very slow and there’s been a long teething process. Renegades and Winterfox have been leading the way and opening the door for Australian Counter-Strike, and now I think Tainted Minds is the new top dog. I think they want to go overseas, but for now they can stay in Australia and compete in international tournaments while living there.”

Who do you think will take the Leipzig event?

“I think Heroic or FlipSid3 should be the two top dogs, you’d expect one of them to win. I liked what I saw from BIG when they playing in the Las Vegas Qualifier against mousesports, gob b is a very good in-game leader and I think the best-of-ones in the early stages of the event help. The fact that there are so many newer teams here there aren’t going to be big weaknesses in map pools, we won’t have too many special maps like Overpass or Nuke, everyone will be staying within the same three or four maps, which opens the door for anybody. For me, the home advantage for BIG might be a big factor here.”

Looking ahead to ELEAGUE Major, who do you have winning that? Is it time for a North American team to win?

“I think it’ll be a European team. I think SK are really going to struggle with Fox on the team. Not that Fox is a bad player, just that when SK used shoowtime in the past the whole dynamic of the team changed because they’ve all bought into the mantra that FalleN has put in of their roles and the way they approach the game, so I think they’ll have a hard time. I think Na`Vi will probably surprise and be quite a strong force, but I actually don’t have a pick for the Major, I’m going to do my predictions by picking a team name out of a hat. I think everything at the moment is still up in the air. Astralis looking like hot favourites I’d say, but I think Virtus.pro, once they get their mojo back and get back in the groove, they’re another top team, so it’s up in the air.”

We noticed this event was kind of a solution to the issue of over-saturation. In the latter parts of 2016 all events seemed to feature the Tier 1 teams, and there seemed to be an event every weekend which burned out the teams. Is this the future for CS, a mix between the Tier 2/Tier 3 events and Tier 1 events?

“Yeah, I definitely think this is the natural evolution. We’ll be seeing more Tier 1 teams doing what Na`Vi and Virtus.pro have done and skip events, or not qualifiying and forcing them to skip events and being helped by that. I think they need to take more breaks and focus more on the bigger events. What would help is if we could get some kind of a schedule for the teams so they can plan a little bit better instead of events popping up left, right and centre. I think this is a good example of what we’ll see more and more of and we’ll see more of these teams getting an opportunity, which I think helps Counter-Strike as everyone’s going to get fed up of seeing the two top teams playing each other every week. When you’re giving new faces this environment to play in we’ll see more stars and more talent rising up which is going to be a positive thing as well.”

We’d like to thank Chad once more for giving us his time to complete this interview.

What do you think about SPUNJ’s predicitions for Leipzig? Let us know by commenting below or tweeting us @GAMURScom.