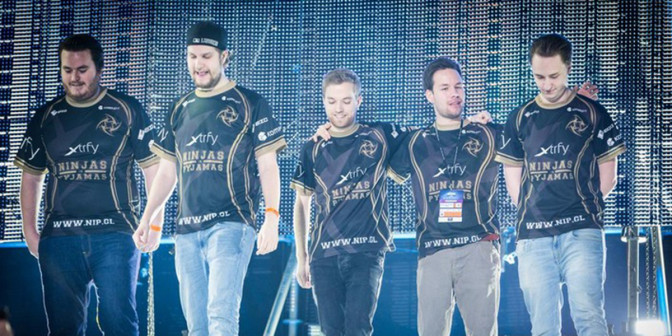 Hailing from Finland, allu is the new AWPer of Ninjas in Pyjamas. Previously playing in 3DMax (and even before in mousesports), he had put up performances that made him without a doubt the best Finnish player around, and a Top 5 AWPer in the world. Recruited by the Ninjas just weeks before ESL One Katowice, the first major of the year, he made a lot of noise not only due to his own transfer, but also because of him replacing Maikelele, NiP’s first attempt at replacing Fifflaren. Maikelele’s performance never made anybody think he was at any danger of being dropped, so allu’s arrival was seen an unexpected gamble. The Finn has now played an entire LAN tournament with the Swedes, and while it is not yet time to assess with certainty whether he is a good fit for them or not, there is enough information to make an early evaluation. Has NiP’s bold move paid off?

When it comes to allu’s raw performance, there are some bad news and some good news. The bad news is that he only excelled in one series in the entire tournament, that being the final best of three against fnatic for the title, where he made some big plays and held a crucial role in keeping NiP alive for all three maps until the final, almost successful comeback. The good news is that his other games were never bad but mostly average, and his average level of playing is not bad at all. allu never ceded to the nerves of playing at such a high level with such high expectations, utilizing his AWP at his best and keeping his level consistent at all times. While not as flashy and bold of a player as Maikelele was, allu manages to make the difference through key frags to give his team an early advantage and to open and later defend bombsites on the T-side, as well as locking them down through passive angle holding and a great ability to hold pushes and land the shots that matter on the CT-side. He also surprised by playing very efficiently with a rifle whenever it was needed of him to do so, at times even entirely passing the role of AWPer to f0rest. Finnish is a hard, almost scary language. Extremely different from the other languages of the Scandinavian zone, some say that fluency in it is unachievable without being born in it. While Swedish is taught in Finland and it is the country’s second national language, the average student does not hold a high level of it. Because of this, allu’s transfer did not only bring up gameplay related questions, but communication related ones as well. While in other eSports, namely League of Legends, language barriers can be and are overcome through game integrated means (pinging, for one) and simple key words in whatever the lingua franca for the team may be, in Counter Strike, clear, verbal and often complex communication is a must for any team. The explanation given at first by the NiP players, that they would speak Swedish and English, seemed fragile. However, it turns out that it really was not. The Ninjas’ comms ended up being very clear and understandable, and the use of both Swedish and English went well for all five players: not once was something obscure to any of the players (Besides the crucial role of the Red Bulls on allu’s table) and not once has it seemed like anyone was challenged by the language barrier. Is it too early to draw conclusions about allu’s role and effect in this lineup? Very much so, especially considering that allu’s positions and responsibilities in the team are still not clearly defined. But so far, he has been a valuable asset to the Ninja’s game. In Katowice, he managed to do exactly what was expected of him as a top level player and more, without any of the problems that some predicted he would face. A pleasant surprise, the Finn played well and consistently, being a major part of the lineup’s nearly winning run. He seems to be integrating well with the team on a personality level as well, keeping a great chemistry at all times, which has always been a trademark sign of NiP in CSGO. With Gfinity London happening in just a few days, we will see allu compete in another big tournament, and gather some more data about his play. But for the time being, the Ninjas do not have to miss Maikelele, because allu has played his role just fine and looks to be the right one for the job of taking NiP’s AWPing to a whole new level.