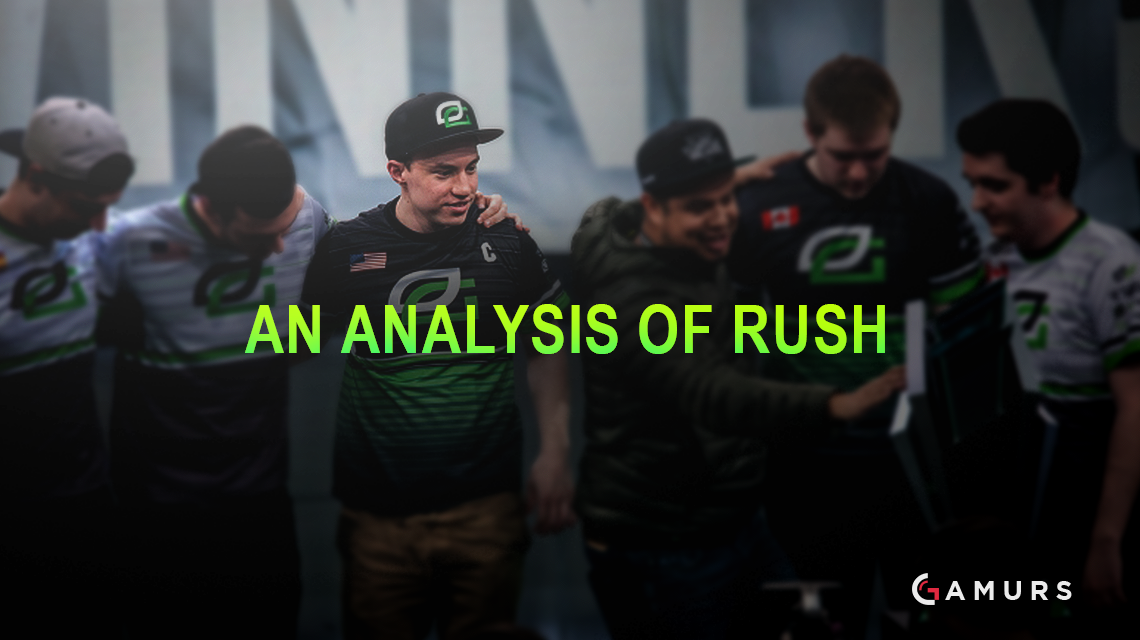 For most people, ELEAGUE was the first time they really took note of Will “RUSH” Wierzba, and by watching ELEAGUE, they still don’t really know how RUSH really plays or his impact on OpTic. In this article, I will guide you through both a qualitative and quantitative analysis of RUSH and how he fits within the OpTic system.

By looking at his Liquipedia page, it will seem as though RUSH has been around Counter-Strike: Global Offensive for a while, but that would be incorrect. He really only got his start in 2015 with Elevate. On Elevate, he was joined by players like Daniel “roca” Gustaferri and Jonathan “EliGE” Jablonowski, before they made their breakthroughs. RUSH’s time on Elevate did not overlap with that of Jason “moses” O’Toole. Elevate was confined to NA LANs and online leagues because they were not good enough to compete at international LANs. But, “compete” isn’t really the right word for it because not even Cloud9, before their 2015 summer run, could challenge Europeans, and since Elevate was a tier below Cloud9, that really shows what place they and RUSH were in.

After Elevate, RUSH joined Conquest, the team that later became OpTic. Conquest’s biggest accomplishments were placing higher than Luminosity and Na’Vi at a CEVO LAN and qualifying for ELEAGUE Road to Vegas, where they later competed under OpTic. Shahzeb “ShahZam” Khan was really the only name on the team that stood out. Even though ShahZam was more of a name brand than the others, they were all unaccomplished; they were North Americans with nothing of note.

The Conquest players were pretty much the same under OpTic. They qualified for ELEAGUE over CS:GO Lounge, which was not a very big accomplishment. They were more known for the scandal surrounding them than their in-game ability. The team was performing below expectations. They had also missed an official game because ShahZam slept through it. OpTic was a mess, and ShahZam was kicked for an unknown Spanish player, Oscar “mixwell” Cañellas. mixwell actually turned out to be a good player and surpassed all expectations.

The next phase of OpTic is the current one, and that was marked by Tarik “tarik” Celik joining the team. This should have been a smooth transition to success, but the team couldn’t agree on who to kick: Damian “daps” Steele or Peter “stanislaw” Jarguz? In the end, after an extended back and forth, daps was the odd man out. In-game leadership transferred to stanislaw from daps, and being a cerebral player, the transition went over well. mixwell, the primary AWPer, lost the AWP to tarik and Keith “NAF” Markovic, and he lost some of his game impact in the transfer as well. Despite losing some of his impact, mixwell retained stardom, and tarik is right up there with him as a primary star.

RUSH is the team’s lurker. He stays back most of the time and is good in clutch situations. The reason why he is able to do well in 1vX’s is because he is smart. He is not the cheesy kind of smart, but rather, he knows how to put himself in situations where opponents will walk into his waiting hands.

RUSH doesn’t have impeccable aim like the stars of his team. He is the rock, the foundation, from which the stars are able to do the things that make them stars. In that manner, RUSH can be considered a quiet star, especially because of how instrumental he was for OpTic in their ELEAGUE victory.

Dispelling the Myth Surrounding the Man

RUSH was clearly an excellent player at ELEAGUE, but does he deliver that kind of performance often? You wouldn’t know by having only watched ELEAGUE; however, I have watched the demos, collected the stats, and analyzed his impact.

The way he played at ELEAGUE was indicative of his usual playstyle. The change was in his game impact and that of his teammates. The stars, tarik and mixwell, died down a bit. This allowed NAF and RUSH to have a higher impact. Part of the reason he was able to do so well was the lack of strong opponents, Astralis being the only strong team they faced, in my opinion. When they met Astralis, the Danes were in the worst possible situation imaginable. They were the favorites, and they were in a high pressure situation, perfect weather for decreased performance or an outright choke. If Virtus.pro won against FaZe, as they should have, OpTic would have most likely lost in the semifinals.

While this performance may appear out of the ordinary to those familiar with RUSH, statistical analysis would reveal that his ELEAGUE showing was within the realm of statistical probability. For the curious, and those with knowledge of statistics, you can find the complete analysis here, courtesy of Josh “CH3MISTRY” Billy:

A 30 game sample size of ADR and HLTV Rating was collected. To be clear, the sample was collected before ECS.

From what Billy tells me, there was too much variance in the stats to say that ELEAGUE was an overperformance, something that cannot be attained often. However, something clearly snapped into place for RUSH at ELEAGUE. If he didn’t turn up, they would have most certainly lost. Now, we can’t know exactly why RUSH appeared better at ELEAGUE than before and has inconsistent stats, despite playing a stable role within a tactically oriented and stable team. With the given sample size, we must take the ELEAGUE result as possible and repeatable. However, if we were to take a sample going back to when tarik first joined the team, a different picture may be painted. Therefore, there is some doubt as to the repeatability of the ELEAGUE performance. Further statistical analysis is warranted.

Based on the small sample size, relative to his career, a qualitative study of RUSH ought to be preferred to the 30 game statistical one. The stats are not irrelevant, but they are not an adequate substitute for reviewing the demos.

What does that mean for RUSH?

RUSH is certainly a good player within the North American scene, but he falls short when compared to players of similar roles, like Andreas “Xyp9x” Højsleth. RUSH needs to have the same impact as he did at ELEAGUE in the upcoming tournaments, in order for him to be put in the same category as players like Xyp9x. He did happen to best Xyp9x’s team in a best-of-three just one week ago and is looking good at ECS, and that counts for something.

ELEAGUE was the first time many people first took notice of RUSH, and to adequately judge his impact, they must go back further. Upon analyzing the demos, one will find that RUSH is a valuable asset to his team, and that his excellent showing at ELEAGUE matters more than what one may think.

RUSH is a role player and is valued for that by the community. Players, like RUSH, coming to the forefront show much needed change within the North American scene, a scene that has only valued aim in the past. Perhaps, it is not his in-game contribution that is most important to the scene but OpTic’s success being built upon the stable role-player, RUSH.