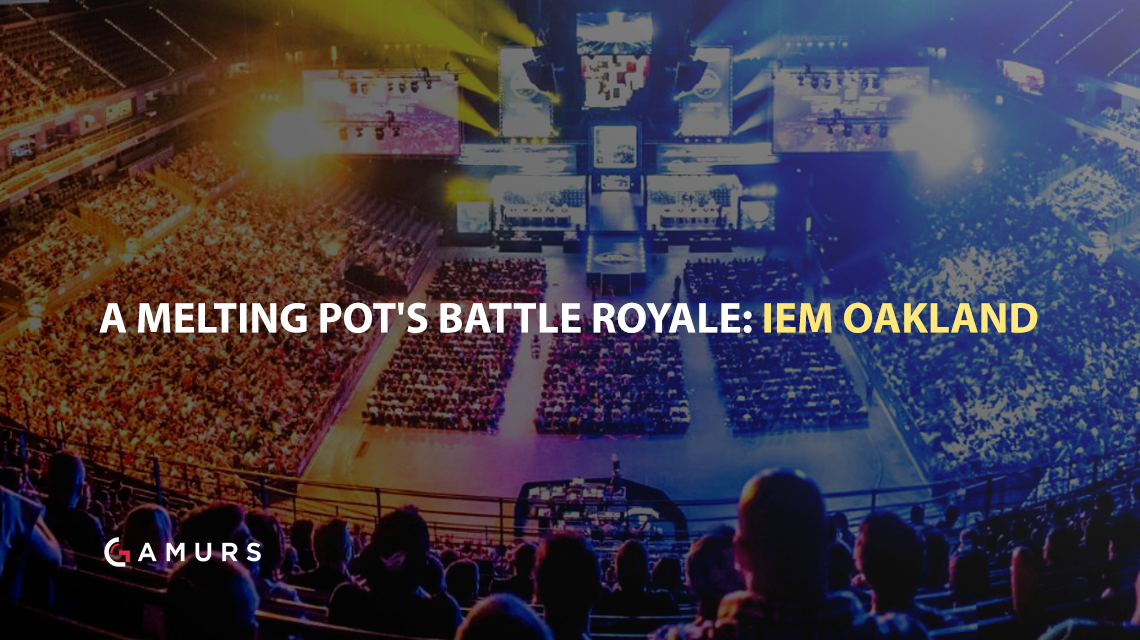 Natural law dictates that those who sit atop the food chain and hold primacy in power also hold in equal parts a responsibility for maintaining order in the present, and a willingness to accept accountability for the future. As such, in large-scale international LAN’s like IEM Oakland, it is on the apex predators – the elite level teams – to keep their lower subsidiaries in check. They are the watermark to pass, the bar to raise and the players to beat. Their presence – or lack thereof – acts as the backbone to build a tournaments overarching narrative; especially in present time where teams outside the status of ‘elite’ trade maps with shocking regularity and unpredictability. The teams which currently reside on top of the CS:GO space are Virtus.pro, SK Gaming, Na`Vi, and Dignitas.

At IEM Oakland, only two of these four key teams will be present – Na`Vi and SK. The lack of their other two direct rivals – whilst concentrating their own chances of a strong placing – also destabilises group stage play with a dilution of the aforementioned natural law. When this unpredictability is combined with a true splattering of international competition and a best-of-one group stage, the most likely result will be a melting pot of teams from around the globe in a volatile Battle Royale of the most entertaining calibre.

Although the Bo1 format will look to be a bigger hurdle to overcome rather than any specific team, Na`Vi and SK are the two clear favourites. Whilst Na`Vi as a team clearly show cracks in their communication on CT side, and implementation of dynamic changes of pace on T side, this can all fall by the wayside if their superstar player and whom many consider to be the best player in the world – s1mple – is activated. With statistics in his team’s losses that most other players would kill for, s1mple’s hybrid, aggressive, duelling dominance is undeniable. However, while s1mple is a force of nature, the rest of his team’s individual play has seemingly suffered to accommodate the Ukrainian prodigy. Since giving the role of secondary AWP to s1mple and taking up the mantle of in-game-leader and captain, once legendary site anchor – seized – has struggled to maintain his individual level. The same can be said for both flamie and Edward whose play, is a far cry from what it was earlier this year. So, although they might have the player with the highest skill ceiling in the world and the ability to actually reach that insane height, it might all be for naught if his team can’t maintain consistency in every game of groups due to the Bo1.

SK’s role in Oakland is just as important as Na`Vi’s, but significantly more enigmatic in nature. Looking at the majority of their recent results it would appear that the Brazilians are back on track to cementing themselves as the kings of CS:GO once again. At ELEAGUE they made short work of Na`Vi in an easy 2:0 win, beat dark horses Ninjas in Pyjamas and G2 Esports in convincing Bo3 fashions, and boast a slew of Bo1 wins over top ten ranked teams. However, Virtus.pro’s insanely deep map pool, bag of tricks, position swaps and experience has proved unscaleable for FalleN and his men. Even though Virtus.pro aren’t present in Oakland, one also has to consider SK’s Bo3 loss against Cloud9 that saw them almost lose their core map of Overpass to the Americans. Although there are still brilliant reminders of the enamoured individual skill that is on SK, as shown in their most recent win over Na`Vi at ELEAGUE, you also have to keep in mind the Coldzera is no longer in the conversation for best player in the world and FalleN’s position in the top five is debatable at best. Their loss to Cloud9 shows that a heavier focus on individual plays can’t work if no players are firing on all cylinders. If they want to win IEM Oakland, it might have to be in a system more akin to that of early 2015 that relies on heavier tactics and teamplay rather than individual, superstar performances.

North America is probably not as favourably represented as the fans in Oakland would like, with only Cloud9 and Liquid present. From trying to not get sunburnt by the beaming rays of a community in love with their success following their win over SK at the ESL Pro League Finals, to quietly losing to Immortals at iBUYPOWER Masters, Cloud9’s relative up and down consistency has been masked by domestic domination and a both growing and impressive international tournament resume. In stark contrast to Cloud9’s rise which was catalysed by the at-time questionable pickup of Autimatic, Team Liquid’s downfall to mediocrity has been accelerated through the at-the time acclaimed acquisition of Pimp. Unlike Autimatic, you cannot point at Pimp’s results as the reason for his teams results; rather, it seems that the long-term addition of jdm64 has failed to yield the same level of star power he possessed on CLG. Jdm64’s lacklustre individual game combined with the coaching change that saw the exit of peacemaker, has made Team Liquid an exceedingly mediocre team in an exceedingly mediocre region – something that their financial backing might lead you to believe otherwise. On homesoil, it is vital that Liquid aim to redeem themselves with upsets over the established European talent in their group, and Cloud9 couldlook to cement their lineup as one of the greatest in the history of NA.

The teams that add the diversity in what would be a European vs North American (+SK) showdown is the addition of the European mixed-conglomerate FaZe, second-best Brazilian side Immortals, and Chinese upstarts with now solid Visas – Tyloo. In the Bo1 environment, all three of these teams could find themselves making it out of groups. Faze under the weathered leadership of Karrigan is starting to find newfound tactical depth and map pool which can actually be worked with (with even Nuke being shown at iBUYPOWER Masters). Considering where the team once was with no wins Bo3 wins over top ten ranked teams, any ground gained in Oakland is vitally important in legitimising the FaZe roster.

As such, in large-scale international LANs like IEM Oakland, it is on the apex predators – the elite level teams – to keep their lower subsidiaries in-check. They are the watermark to pass, the bar to raise, and the players to beat.

Immortals have slid from their perch as the second best American team behind SK Gaming team to reside somewhere near Cloud9’s level of form. Although their new roster swap that saw them bringing in old CS:GO hand steel, not really working out with the ex-Luminosity player making the bottom of the scoreboard his home, the rest of the roster seems to be on-fire and keen to play upset to established names in Oakland. Then there was the Chinese question; with only two wins over a more than struggling Echo Fox to make it into Oakland, and a resume that only contains dominating wins over Asian and Oceanic opposition it remains to be seen just where they can place on the international circuit. But again, as long as they can avoid embarrassment in Bo3’s and score the occasional Bo1 upset, a Tyloo top six finish is not unreasonable to think.

Oakland will also bear witness to many prospective teams who have newly found momentum like Iowel on Mousesports, and niko on Heroic. However, these are the best of the rest. NiP will more than likely work through the growing pains of bringing back pyth from injury, Astralis’s most promising result in the last three months has been a Bo1 win over SK at ELEAGUE, and G2’s streak of hot form is but a distant memory, with the thought of a French shuffle more prevalent than ever. But these are simply the soldiers and journeymen to a massive melting pot of dormant potential. IEM Oakland is a tournament that has a strange quasi-balance of favourites diluted by a larger pool of unpredictable teams, playing in a volatile Bo1 group format. Whilst many fan favourite’s will be left apologising over social media and playing this same system they looked to exploit, for fans of the exciting and cutthroat CS there is not much more you could ask for.

What are your thoughts on IEM Oakland’s strange setup? Let us know in the comments below or by tweeting us @GAMURScom.

There are rumours that this entire article was constructed on the premise of putting a sick  photo of a lion in it. Whilst I have no comment on these accusations you can barrate me on twitter @max_melit for an actual answer.