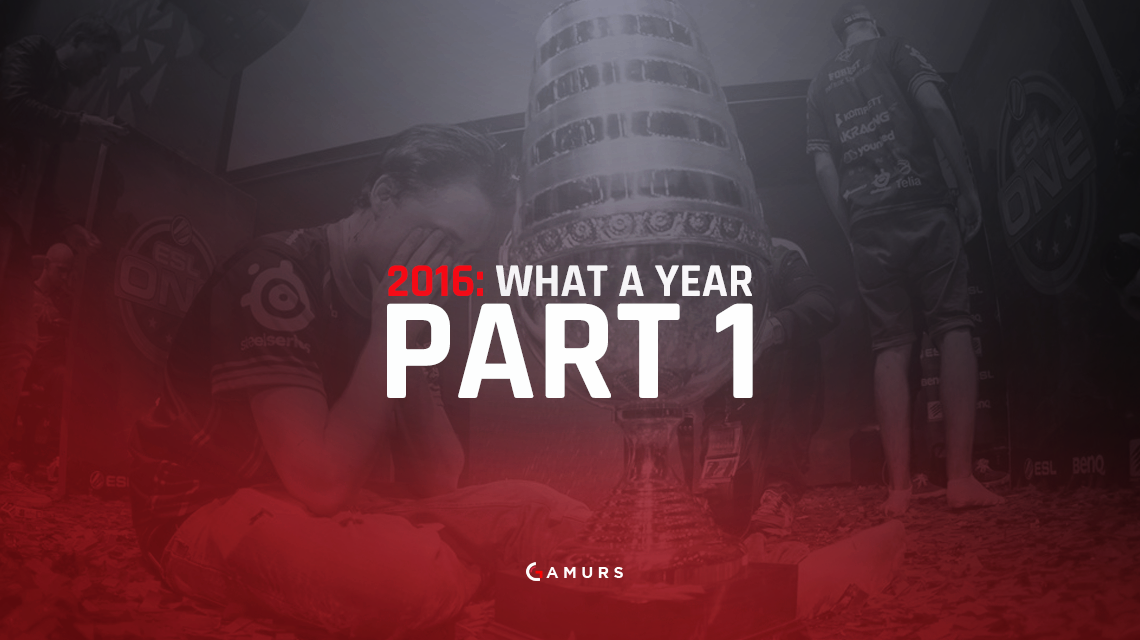 As we approach the final month of the year, we close the books of Counter-Strike in 2016. Upon reflection, it was a great year. We’ve seen the miraculous rise of teams and the disastrous fall of others. Some things got better and others got worse. It’s now time to look back on it all.

Jacob “pyth” Mourujärvi was considered a decent player on a bad team called Winterfox. Winterfox was a team comprised of unproven talent and washed-up players. This team played in North America but was composed of Europeans. After the team failed to do anything worth mentioning, pyth was recruited by Ninjas in Pyjamas. He played better than expected, and NiP improved as a whole.

Bjorn “THREAT” Pers was a legendary in-game leader in 1.6, and his return in Global Offensive was just as great. THREAT took the reigns of a untruly NiP, which had refused to follow the directions of Faruk “pita” and Joona “natu” Leppanen before him. To have control was either a sign of Ninjas changing or THREAT being an extremely effective coach. Either way, he has faired well through many challenges, like filling in for pyth at the Major and providing tactics for the team while working on his masters during the coaching changes and pyth’s injury, making him one of the best coaches in CS:GO history.

Oleksander “s1mple” Kostyliev joined Team Liquid after his career was in shambles–after leaving FlipSid3 and Hellraisers as well as being involved in a few scandals, such as withholding giveaway items from fans and raging at teammates in FPL. Due to his connection with Spencer “Hiko” Martin, s1mple found a place on Liquid. S1mple, during his tenure with Liquid, made it to the semifinals of a Major, which was further than any other NA team in CS:GO history. At the next Major, s1mple stood in for Liquid and they beat that record by making it to the finals and losing to the unbeatable SK Gaming. S1mple proceeded to leave and join Na’Vi, a Ukrainian powerhouse side that held s1mple’s only shot at becoming a true champion.

The recruitment of Stewie2k was criticised left and right by the public. Everyone had something to say, but they all basically said the same thing; “Jake ‘Stewie2k’ Yip is a stupid kid who has some natural skill at the game, but that only extends to PUGs. He hasn’t even played at a legitimate professional level. He is all aim and no brain. And who knows what his nerves will be like.” However, his development into the amazing player that he is today does not justify the recruitment of unknown and unproven players. That point only emphasizes the miracle that is Stewie2k. He has been pivotal in Cloud9’s success, and his age, talent, determination, and willingness to learn new things means that he will definitely be featured in timelines like this one in the years to come.

At first, everyone was really hyped for the return of Nuke, but as everyone reading this very well knows, that initial infatuation disappeared very quickly. It took a very long time for Nuke to even get played by the few teams that play it today. Newke had some interesting changes, but it lacked the directional sound that a two-layered map needed. Despite having different surfaces for different levels of the map, pros called it broken. Inferno, a map that everyone was willing to play, was taken out, even though there were other maps that more desperately needed updating.

TL pick up koosta and he fails

Kenny “koosta” Suen looked like a promising new AWPer at the MLG Minor. Though it was really his only showing up until that point, it was so dominating that he had proven himself worthy of Liquid. Plus, such a commanding performance in a region that lacks AWPers must have compelled Team Liquid to act fast. Koosta joined Liquid soon after the Minor, but his performances in Liquid did not live up to those in Selfless. Perhaps, this was because he was clearly the best player on Selfless, and many resources were devoted to him in order to get him to the observed level. On Team Liquid, a team with many skilled individuals, koosta would not experience the same level of support, which is why he might have flopped. Also contributing to why he was let go, koosta was unable to get along with other players, namely s1mple. Lacking skills and teamwork, it was not a surprise to see koosta kicked from Liquid.

Fnatic had an unbreakable streak of dominance in 2015 that was only done once before in CS 1.6, winning all the Majors in a year. The next year, Fnatic did what no other team had done before, winning six tournaments in a row. At the next tournament, Fnatic was thought to keep its run going, win seven titles in a row, topping it off with a Major, but that didn’t happen.

Fnatic crumbled at the MLG Major. Later on, it was revealed that Olof “olofmeister” Kajbjer had a wrist injury, and the rest of the team was unable to fill in the holes. Olofmeister, already realized as an incredible player, was then evaluated to be an even more essential player to the team. In his absence, Fnatic was unable to pull it together. After he returned, Fnatic and olofmeister didn’t have the same shine, leading to the team falling apart after the ELEAGUE finals.

Na’Vi fails at MLG due to GuardiaN’s wrist

Ladislav “GuardiaN” Kovács, like olofmeister, had a problem with his wrist that was manifested at the MLG Major. For GuardiaN, it became evident in the finals that he had difficulty hitting his iconic shots, and the rest of his team was unable to pull up the slack. Na’Vi lost its big chance at winning a Major to SK Gaming, who were just an unheard of Brazilian team not even a year before.

Richard Lewis was primarily an investigative journalist who had also hosted events and was good at it, but that was more of a sidejob. After getting hated by the community too many times to count for no good reason, Richard Lewis sought job security through ELEAGUE. Richard Lewis no longer has to worry about Reddit bans or the community hating him.

Teams from Asian countries in other games have done quite well, but in Counter-Strike, they have been quite underwhelming, with a few exceptions. Tyloo had a few impressive performances on LAN, most notably Dreamhack Masters Malmo. Tyloo had a mysterious Asian style that involved winning narrowly off of brute force. Eventually, it stopped working, so Tyloo had a long-term bootcamp in Europe. That bootcamp didn’t really work out, as evidenced by their recent results at iBuypower Masters and IEM Oakland. As Tyloo plays against more Western talent, they expose their own issues more and more. In their transition towards becoming a more relevant team, Tyloo, and other Asian teams, are currently undergoing a depression where their playstyle has been figured out. Now, it is time for Tyloo or some other Asian team to figure out how they fit into the Counter-Strike international scene.

After the CGS, it was only natural for esports veterans to doubt whether ELEAGUE was going to be true to the sport and not destroy the entire ecosystem. ELEAGUE took off with hardly any hiccups. The only things associated with the project that I object to would be the Buffalo Wild Wings refusal to have ELEAGUE on their televisions, despite being a sponsor and having promised that it would be available for viewing at their restaurants, the small venues, and Turner’s very cheesy/out of touch “eStream.” Besides these complaints, which are now either resolved or quite easy to overlook, ELEAGUE has done very well. The original model was conceived of so as not to interfere with other tournaments, but it still did have an effect. In Season 2, ELEAGUE was reformatted so that it now has even less of an impact on other events. ELEAGUE has been a model of professionalism and serves the esports viewer, not the other way around.

It would be too tedious to attempt to describe all of the complexities of the situation, so I will stick with the basic, need-to-know things. Luminosity used to have the players who are now playing for SK. Luminosity signed the squad while they were a poor Brazilian team and brought them to America. They lived in pretty poor conditions in America, but they were elevated to another level while on Luminosity. SK came along and promised an even beter way out of that with higher salaries and better living conditions, so the players signed letters of intent. This signing was done just before the MLG Major and at a peak of dissatisfaction with Luminosity. After the Major, it got out that the players had signed these letters of intent while under Luminosity, but they had also agreed to a raise and contract extension with Luminosity. Gabriel “FalleN” Toledo came out and sided with Luminosity, stating that everything about the leak and what SK had said was untrue. Later, however, the team happily joined SK. This debacle led to the loss of a spot in the ELEAGUE playoffs for both organizations and sets of players.

SPUNJ gets removed from Renegades

Chad “SPUNJ” Burchill’s removal from Renegades stirred up some emotion in the community. He was loved by the community, and Renegades was his team. After cutting his bearded friend and longtime teammate, Luke “havoc” Paton, SPUNJ proved that he was determined to win, but his teammates didn’t think so in the months following the cut. Either that, or there was a personality issue of some kind. After Renegades, SPUNJ has transitioned to casting and analyzing Counter-Strike, which has been well-received by the community.