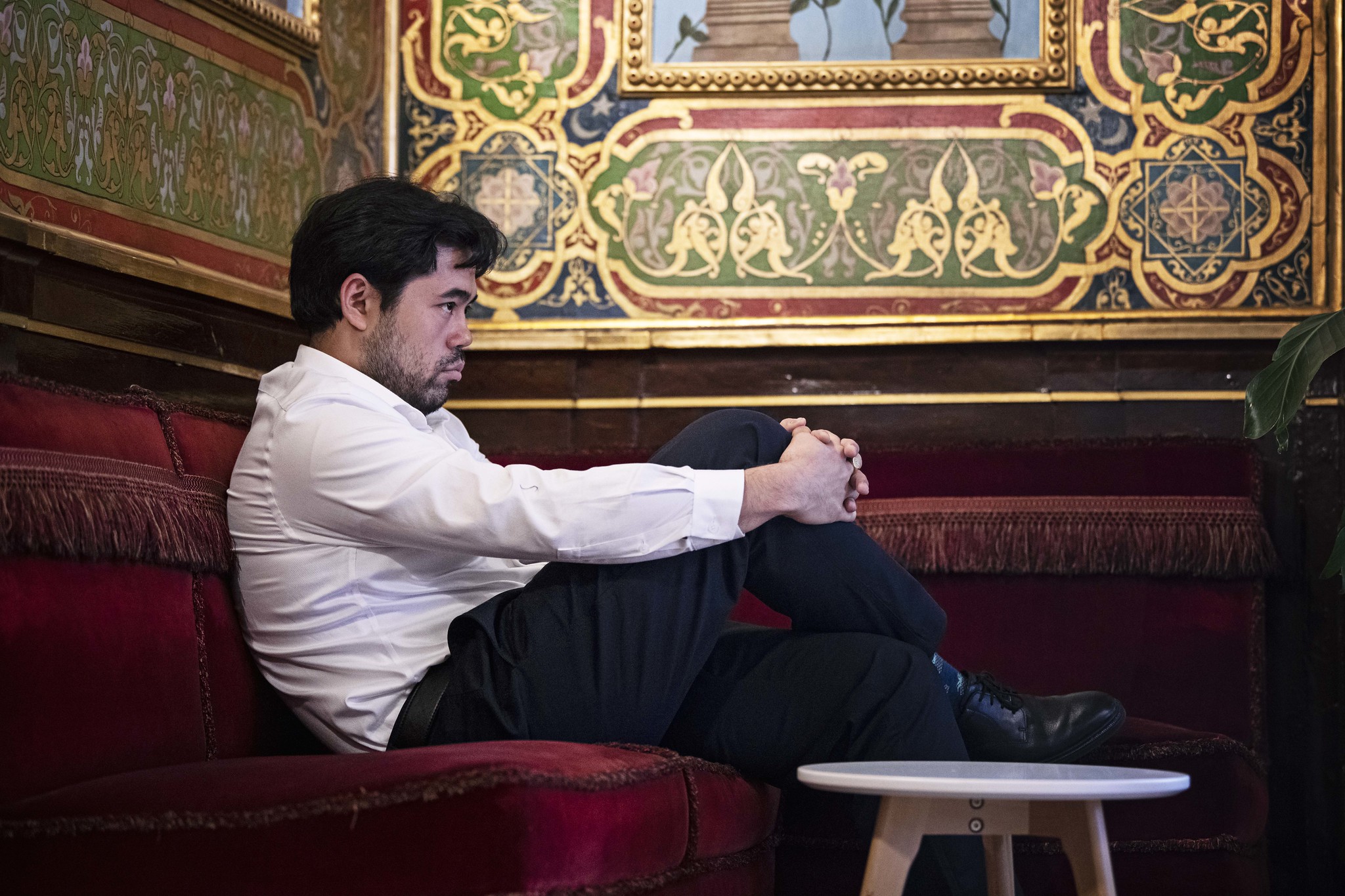 Hikaru Nakamura managed to beat Fabiano Caruana in the headline clash of the round, with Richárd Rapport also bouncing back from his defeat in the previous round. Ian Nepomniachtchi opted for a quick and painless draw against Ding Liren that took less than an hour to wrap up. On the other end of the spectrum, Alireza Firouzja and Teimour Radjabov spent over seven hours in the playing hall to end up with a draw after 93 moves.

Nepomniachtchi’s monstrous run all began with a shock win over Ding Liren in the opening round, wielding the Black pieces against the world #2, no less. Though the Chinese GM only posted draws since then, with marginally improved play over time, this seemed like a reasonable opportunity for Nepo to try and push even further ahead.

Instead, he went into a very drawish line early on, a version of the Four Knights Game where most minor pieces and the queens are both off the board by move 15. Top-level players recorded 67 draws out of 85 games from this position, and as amusing as it was to see Ding Liren’s king venture out to f6 on move 20, the trading continued. The players quickly agreed to a draw in an opposite-color bishops ending.

Having wrapped up his game in less than an hour, Nepomniachtchi took his foot off the gas pedal for the first time this tournament. After Rapport’s blunder yesterday, this was yet another quick game for the Russian grandmaster. It will be interesting to see how this will impact his all-important meeting with Caruana tomorrow. The American had to burn a lot more time and energy over the past two rounds, but he will have the white pieces to potentially snatch the lead from Nepo.

The Hungarian GM paid the price for his catastrophic miscalculation yesterday against Nepo, his first loss in an event where he had already survived many shaky positions. Even in this game, he made a somewhat dubious decision, calling it “total desperation” in the post-match interview. He opened up the f-file on move 14 to engineer an attack on Black’s king.

It was a gamble that paid off perfectly in a game reminiscent of Duda’s loss to Nepomniachtchi only two rounds prior, with an advanced g-pawn proving to be a thorn in Black’s side and the open lines eventually turning out to be the king’s downfall. The game was over in a mere 29 moves. This was Duda’s second loss in the Candidates, and he’s now too far down the standings to dream of a late surge in this winner-take-all event.

Hikaru grinds down Caruana in an exciting affair

In retrospect, Caruana may rue his decision to engage in a messy battle from the Open variation of the Ruy Lopez in a game that slowly slipped away from him. He offered up a +1 advantage by quickly playing out his preparation into a different line, only for Nakamura to follow suit and bring things back to an even keel. A highly complex middlegame position saw Caruana get into significant trouble as Nakamura slowly and coldly rerouted his pieces on the kingside, including the incredible 25, Nh1.

The h-pawn began rolling soon after, and this was the first time Caruana made small but significant errors in this game (and arguably the entire tournament). With his advanced bishop locked to the d3 square with few targets to aim at and no points of penetration on the f-file, he could only watch as Nakamura slowly but surely kept improving his pieces in a positional masterclass.

Caruana gave up even more ground as he approached time control, having just a minute left on his clock by the time he made his fortieth move. Nakamura failed to find the likely win of Be8 just before move 39.

White’s advantage remained clear throughout the match, but Caruana conjured up quite the minefield to create great practical chances to swindle a draw. Running his own h-pawn down the board as a decoy, his resilience and resourcefulness made it very difficult for Nakamura to find a way to convert. Caruana may have had a chance to peg him back around move 60 after g5+.

It wasn’t enough, and Nakamura kept up his advantage on the clock and the board throughout an incredibly complicated position, securing a win on move 74 in a marathon affair. After scoring his first classical win against his countryman in seven years, Nakamura gave himself an outside chance to catch up with the leaders and jeopardized Caruana’s chances to leapfrog Nepo.

Here is Nakamura’s own recap of the game:

This game didn’t get much attention from the commentators online with all the excitement going on elsewhere, but Alireza Firouzja and Teimour Radjabov quietly served up a marathon of maneuvers in a quiet position. They maintained equality and a complicated structure throughout the first seventy moves of the game, only to start seriously twisting the screw in mutual time trouble to try and knock each other off balance as the position began to teeter on a knife’s edge.

This shows that no matter how slow the game began, there is still life in it late into the evening. Alireza had to find a move on move 89 to maintain equality as both players were playing on their 30-second increment, having burned away all other allotted time to reach the position that was once a Giuoco Pianissimo, an opening whose name translates to “quiet game.”

Ultimately, neither side managed to find a breakthrough. With this result, Radjabov’s classical score since winning the 2019 World Cup (the event that qualified him for this year’s Candidates in a topsy-turvy way) reads zero wins, 31 draws, and five defeats. They also remain joint-bottom of the standings, but if nothing else, this marathon game was an important reminder that they are both still here to fight.

Candidates Tournament 2022 – standings and round 9 matchups

How quickly can Alireza recover from this monstrously long game, and how is he coping with the psychological wear and tear of a poor tournament performance? Rapport missed a clear winning opportunity against the Frenchman in Round 2, but at least he now has a win under his belt to shore up his shaky confidence. Still, having the Black pieces to play with severely restricts the Hungarian’s options. He might still have a puncher’s chance considering he will play all three of the players ahead of him in the standings: Alireza, not so much. It will be interesting to see their approach heading into Round 9.

Slowly but surely, Radjabov is becoming a farmable target for the well-performing players in this tournament. Nakamura could go on a hot streak here, and this seems like his best opportunity to score a win with the Black pieces. With the tournament leaders playing against each other and the American facing one of the worst-performing players at this event, someone he has an excellent record against, he might go all-out. Radjabov might opt for one of his now-trademark drawish lines with White.

The runaway tournament leader clash in what could potentially be a decisive match. Their earlier encounter in the event was a wild and exciting affair, one where they opted for a draw instead of further exploring the explosive complications. This time, they have very different incentives to work with.

Caruana’s loss to Nakamura means that he’s now an entire point behind Nepo, meaning it is paramount to him to make the most of this opportunity with White. Should he overreach, though, Nepo is perhaps the best player to capitalize: the tournament leader will be content with a draw but won’t hesitate to take advantage of any potential error. Their first encounter in Madrid was an amazing affair, so we’d love to see more of the same.

Neither player will write home about their performance at this event so far. Neither has won at this tournament, and Duda has lost two of his last three games. Neither team can mount a comeback at this point, but if there is a way to get there, it must start with a victory. Duda has been unambitious in his Black games so far (and fairly imprecise when defending against pawn storms): perhaps Ding now has the perfect recipe to challenge the Polish player in a quest to take the full point home.