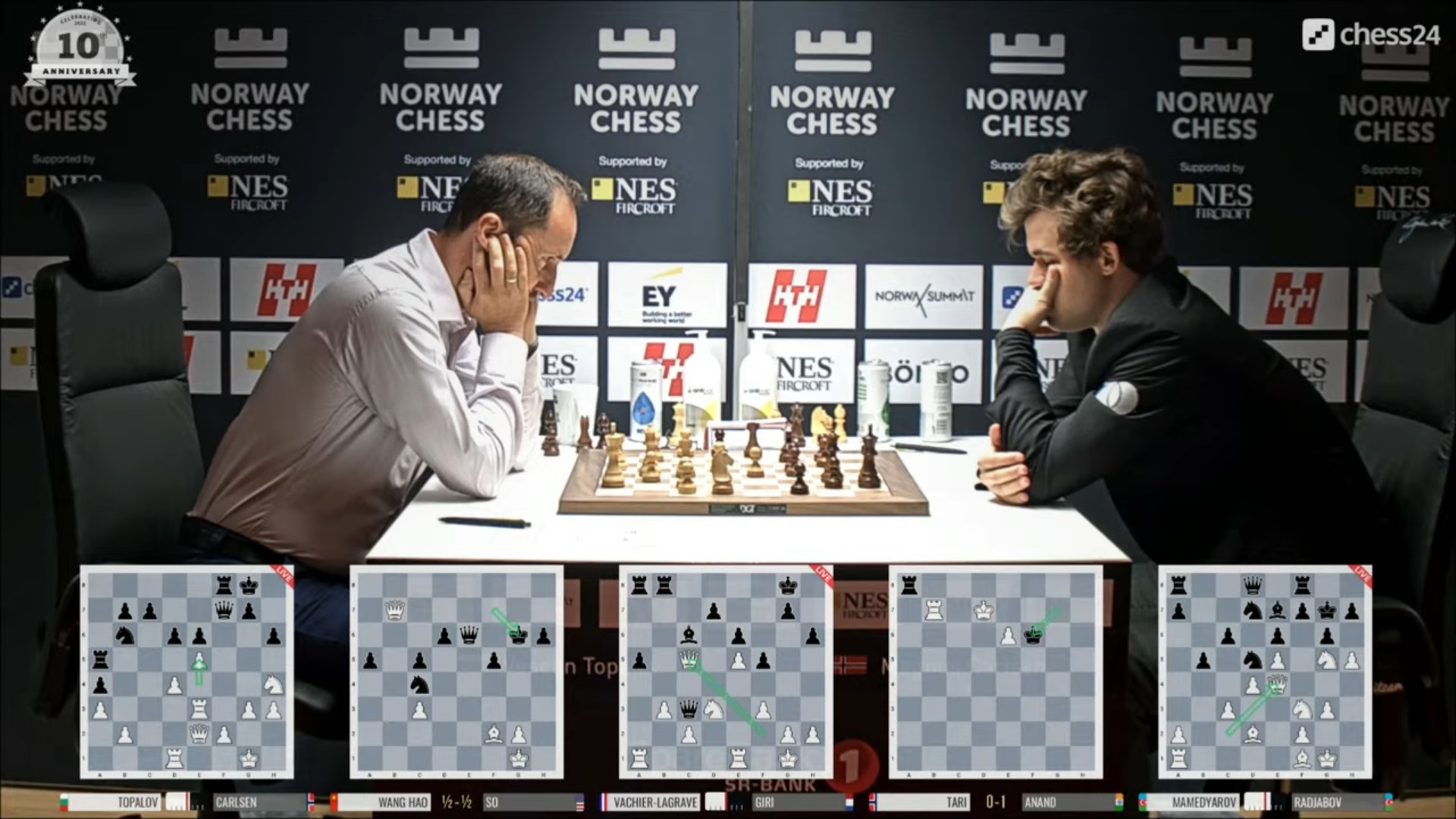 Even beating a field full of top 10 players didn’t get much in terms of ranking points for Magnus Carlsen, the reigning world champion who continues to stay ahead of his contemporaries. The triumphant return of 52-year-old Vishy Anand was among the standout storylines at this event, in addition to the massive underperformance of Teimour Radjabov.

The unique format employed by the organizers of Norway Chess turned out to be a great way to spice up the proceedings. Winners got three points for winning their classical match instead of the usual one, and if the game was a draw, a lightning-fast Armageddon game was played to determine a winner, who got 1.5 points to the loser’s one point. Here, White has ten minutes to Black’s seven (with a mere one-second increment after move 40), but a drawn game means a win for Black.

There was also no added time for the first 40 moves of the classical chess games and only 10 seconds after move 40, which scrambled the proceedings somewhat and led to significant time trouble issues and even losses on time in some of the matches.

Heading into the final two rounds, everything was still possible. Former world champion Vishy Anand has surprised the chess world with his recent string of strong performances across multiple elite events at the age of 52 and a long absence from competitive play, and he was the main rival of Carlsen for the top spot moving into round 8 out of 9. An incredible one-move tactical blunder cost him a crucial game against Shakhriyar Mamedyarov, who therefore leapfrogged him in the standings.

Meanwhile, Carlsen was struggling to survive a tough position against Maxime Vachier-Lagrave, who still had a puncher’s chance to catch up should he find a way to beat to world champion. He stumbled at a critical moment though and the classical game ended in a draw. Carlsen gave him no further chances, closing out the Armageddon game with a win.

This meant that Mamedyarov was suddenly the one with a chance to catch up with Carlsen in the final round of play, but ultimately, the Norwegian’s existing lead held as all classical games were steered to draw and he clinched the extra half point by drawing his Armageddon game with the Black pieces against Veselin Topalov. In the end, Anand had to settle for third place and MVL for fourth. Interestingly, the top four of the standings would have been identical had a traditional scoring system been used.

With this result, Carlsen has now won four consecutive Norway Chess events. His quest for the elusive (and perhaps impossible) 2900 rating goal continues, but it’s clear that it won’t be easy. All he’s achieved with this tournament win was a measly +0.3 ELO. That’s what happens when you are that far ahead of the field.

Next up is the Candidates Tournament to determine Carlsen’s next challenger, should he decide to accept it.

Two participants of the upcoming Candidates Tournament were meant to compete in this event, but with Richárd Rapport’s late recusal, only Teimour Radjabov remained of those elite players who are soon going to battle it out for the chance to become Carlsen’s next challenger for the world championship title.

Radjabov earned his invitation in unusual fashion: he refused to compete at the previous Candidates Tournament because of the COVID-19 pandemic, and he was essentially proven right when the organizers had to postpone the event mid-way through due to a lockdown in Russia. He hasn’t been active in top-tier competitive events in the meantime, though, and his rustiness showed here. The Azerbaijani player only scored 6.5 points, finishing tied for last. This isn’t a good sign ahead of what’s looking like the most stacked Candidates tournament in recent memory.

There is also the persistent black cloud hanging over everyone in the chess world: whether Carlsen will face his new challenger at all. The Norwegian has strongly hinted that his match against Nepomniachtchi was his last as these series take too big of a tall. His final decision still hasn’t been confirmed, meaning the Candidates Tournament beginning on June 16 will be swirling with uncertainty.