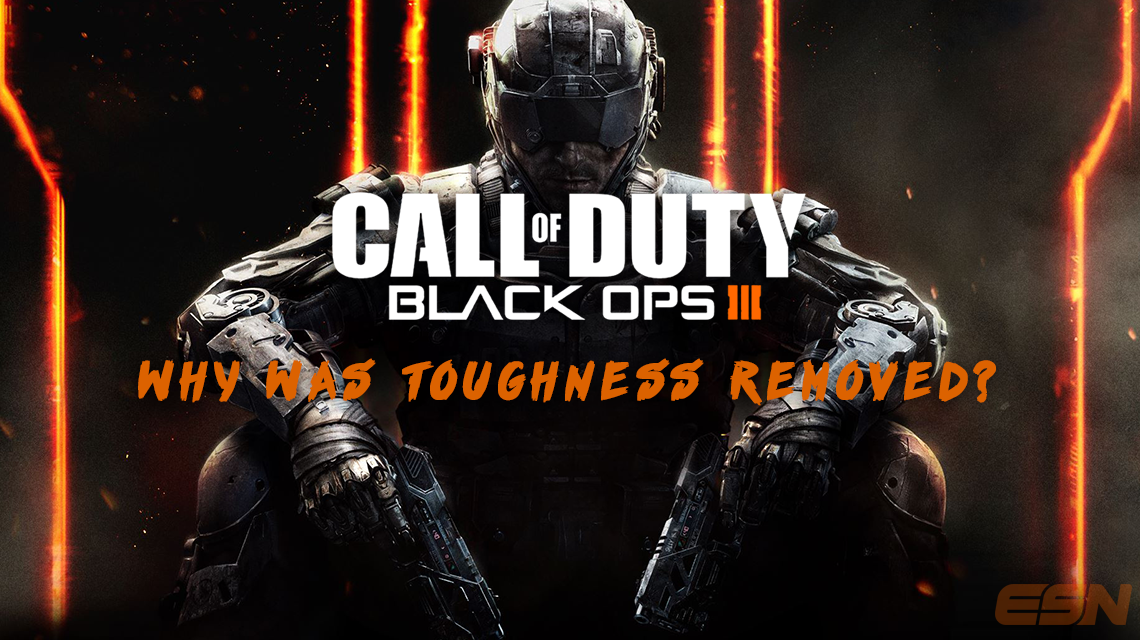 Players have noticed that Treyarch Studios did not include a significant perk within the Create-a-Class menu for Call of Duty®: Black Ops III’s multiplayer beta. The crucial tier-two perk, Toughness, will not be making its return to the series, gratifying and discouraging competitors alike. Why did the perk not remain in the series?

Why was Toughness not included?

Treyarch Studio Design Director David Vonderhaar confirmed in late April, during Black Ops III’s pre-alpha stage, that Toughness would not be included this time around by stating “toughness out” on Twitter, in response to someone asking him if it would return. This caused immediate appraisal and complaints throughout the Call of Duty eSports community. Toughness was introduced back in Call of Duty®: Black Ops II as a tier-two perk and resurfaced in Sledgehammer Games’ Call of Duty®: Advanced Warfare in 2014, both originating from the Hardened Pro perk back in Call of Duty®: Black Ops. The perk as the game description states, makes you “flinch less when shot” (Black Ops II’s description) by 75-percent, along with making your screen less red when shot, allowing a better field of view to retaliate. As previously mentioned, it was created to allow a player to possibly kill an opponent regardless of being shot at first. Toughness was removed since it became as what many competitors like to call a “crutch perk”; a perk that you needed to use, because if you didn’t, it would put you at a huge disadvantage within the CoD eSports realm and in general gameplay. Vonderhaar and his fellow development team over at Treyarch realized this situation and put an end to the perk’s existence before their highly-anticipated title, Black Ops III, releases officially on Nov. 6, 2015. Obviously with any change, everyone has their own opinion and see things differently. Many liked the idea that the playing field was balanced even more, while allowing the use of other non-crutch perks within the second-tier group. This was great for developers to get rid of an unnecessary perk, but the game still needs to be fine-tuned before the release date.

Flinch is more important than ever

Due to Toughness’ removal, competitive CoD players inquired Vonderhaar and Treyarch on social media about how substantial flinching will play a role in the full version of Black Ops III, after getting to trial the game during its open beta stages on PlayStation 4, Xbox One and PC. Vonderhaar was questioned earlier this year by a Call of Duty enthusiast on the matter of how flinching will affect gameplay without the utilization of Toughness, to which he responded:

If you are asking me how much flinch exists, it’s “about” 1/2 the amount between having Toughness and not (BO2). Subject to change.

Fast-forward to the conclusion of Black Ops III’s Xbox One/PC beta, players have had time to feel the digital impact of bullets for almost a week. It’s hard to make an accurate decision on whether or not you want Toughness back in the game, due to the atrocious in-game ping, connection issues on Xbox One’s beta version. Above all, snipers seem to be at an even more disadvantageous position with the current rate of flinch, as their scopes go sky-high when aimed in, rather known as “hardscoping.” We went more in-depth with that topic in our “How’s Sniping in the Black Ops III Beta” feature. Vonderhaar reiterated his confirmation earlier this afternoon that Toughness would not be included in Black Ops III. Many have asked him to implement Toughness by default to everyone, but what people don’t realize is that the perk is a suppressor of flinching. Therefore, the only thing that needs to be done is to balance the flinch rate when shot. https://twitter.com/DavidVonderhaar/status/638047229698183168 Everything is subject to change between now and early November, so it’ll be interesting to see the new formula for flinching or “default Toughness” within the first official version of the game. What are your thoughts on Toughness not making its return to the Call of Duty franchise? Let us know. Stay up-to-date with further details on Call of Duty®: Black Ops III over at our Twitter – @eSportsNation.