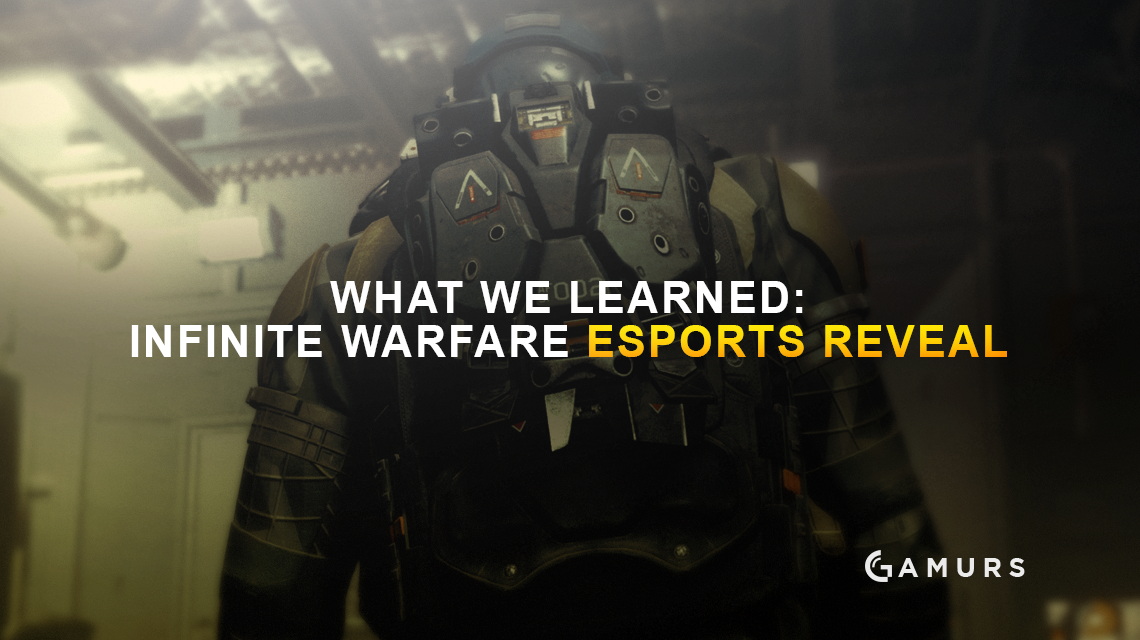 For competitive Call of Duty fans, there has been little information about the upcoming season of the Call of Duty World League or how competitive play might work – until today. The Infinite Warfare esports reveal was streamed live from Los Angeles, California on Twitch. In attendance were casters Clint “Maven” Evans and Jack “Courage” Dunlop, as well as two teams worth of pro players.

The stream unfortunately began with a lack of sound and was then delayed by several minutes, but when it restarted, fans finally got to witness competitive gameplay. It all began with Hardpoint on Throwback, a map players saw plenty of during the beta weekends. The stream also showcased the new CoDCaster mode, which seems to have adopted all the best features from previous titles. Included on the colorful CoDCaster overlay was a hardpoint countdown timer that displays the name of the current hardpoint and makes it clear when the hardpoint is switching. Also displayed was the callout for the current area of the map that the CoDCaster is spectating from, a feature also implemented for players in-game.

The pros played three different maps, one of which had not been seen before. The series included Hardpoint, Search and Destroy and Uplink. Noticeably missing was Capture the Flag, a game mode that had many negative reviews on Black Ops III. Will it be removed completely for competitive play this year?

Between maps, special guests appeared and spoke to Maven about the upcoming year. Activision and Call of Duty World League representatives seemed a bit wary about giving out too much information in regards to the upcoming season, but they did confirm a few things: the CWL will be back (obviously) as will CoD XP at the end of the year (did you expect anything else?). We also heard from Jay Puryear of Activision that the CWL regions will be expanded. At present, the regions include all of North America, Europe, and Australia/New Zealand (ANZ). Apparently, the ANZ region will be renamed APAC in order to include Asian countries. No other information on this subject was given.

According to a Call of Duty World League representative, after the first year of the league, CWL administrators began addressing player and fan feedback and will be implementing more offline tournaments in the upcoming year. To pull this off, the CWL is working with multiple organizers around the globe, with preparations ongoing. The first event has already been announced and will be held in Las Vegas, Nevada, hosted by Major League Gaming. MLG Vegas is dubbed a North American “regional” event, meaning only North American teams can participate in the pool play or open bracket. This, of course, is part of the new CWL initiative to offer both regional and global events – global meaning that they are open to teams from all regions. With regional expansion already announced and several global events expected, this year may have more Call of Duty esports action than ever. To do this, the CWL is working directly with MLG to implement a points system in which CWL Pro Points can be earned in both offline and online events.

Last on stream was Tyler “TeePee” Polchow, former pro player turned analyst and competitive Call of Duty consultant, who spoke about how he helped Infinity Ward with the competitive ruleset and map design. During his segment, Maven pointed out something we already noticed after watching the first few maps played: there will be no Ban and Protect mode on Infinite Warfare. Instead, new rules will be implemented. Specifically, there will be a weapon draft in which each player selects two weapons; the only weapons each player can use throughout the entire series. For clarity, each player must draft two different weapons from their teammates, meaning each team will have eight weapons in total available. While we didn’t get to see this in the stream, this is a brand new feature and is intended to encourage diversity in player roles.

TeePee also confirmed that there will be base bans implemented at the start of the game. This means that many guns and equipment, deemed non-competitive, will not be available for selection. The original ruleset, however, will be considered “Version 1” and will be revised based on player feedback ahead of the start of the CWL in early December.
While the live stream was informative, it only revealed so much about the future of Call of Duty esports. Many were expecting word on an in-game ranked mode, which has been implemented since Black Ops II. Infinity Ward, though including a competitive playlist in Ghosts, did not put much emphasis on their ranked mode. Will they do it this time? How will the ranking system work? Also lacking were specifics on how the CWL will be structured this coming year and how to qualify for it. Unfortunately, we may have to wait until launch day or later for these questions to be answered.

What are your initial thoughts from the Infinite Warfare esports reveal? Let us know by commenting below or tweeting us @GAMURScom.