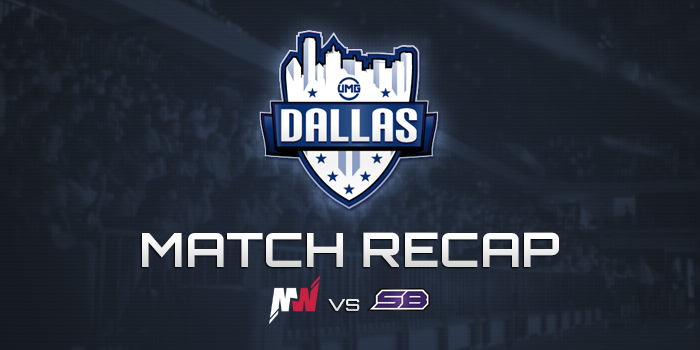 The first match of the day was between one of the newest teams to join the community, Most Wanted, which consists of Classic, Huhdle, SpaceLy and Slacked. Most Wanted’s opponents for the first match was Strictly Business, a team that has seen some success since their formation in late 2013 and currently consists of Phizzurp, Stainville, Methodz and John.

The first series of the day started off on Octane Domination as both of the teams looked to take an early lead on the first day. With Octane being an AR dominated map, which ever team is able to take control of the power position first is most likely the team that will take the map.Most Wanted busted out of the gates with a great break which was short lived as Strictly Business bounced right back.

The first side was going back and forth between the two teams with Huhdle managing to hold down a power position. After round 1, Most Wanted was in the lead by 85-66 going into the second side. At the end of the game Most Wanted and Strictly Business played fantastic but with a dominating performance on the second side, Most Wanted came out the victors taking the map 155-143.

With the Most Wanted lineup taking the first map, Strictly Business looked to bounce straight back into formation and tie the series up 1-1. The two teams went into Freight Search and Destroy but it was Most Wanted that seem to dominate the majority of the rounds.

It took Strictly Business 5 rounds to get their first point on the board. The rounds then went back and forth right until the dreaded round 11. Both teams played the round very slowly as they were playing for picks but MW made the first move which they managed to capitalize on with the second map win. There was one real standout player in the Search and Destroy going by the name of Classic as he finished the game off with 17 kills and 7 deaths which amounts to a 2.43 K/D.

John continued his dominance on the second side as Phizzurp started to pick up the pace as it looked like he was killing everything that he saw. The improved plays from Phizzurp continued to help Strictly Business as he ended up picking up a 4 piece to give sB an even most of a boost. John concluded the match with 30 kills as he lead his team to a much needed 17-14 victory over Most Wanted.

With Strictly Business now only down by one map, they looked to take the first series of the day as the two teams went to Sovereign Domination for game 4. From the break Most Wanted are looking very strong as they manage to hold down a quick 3 cap for 40 seconds to give themselves a good lead over their opponents. Most Wanted went into the second side with a 31 point lead over Strictly Business.

The second side of Domination was not the most exciting as Most Wanted managed to hold down a 2 cap for almost the whole of the second half as it seemed like Strictly Business had nothing left in the tank.