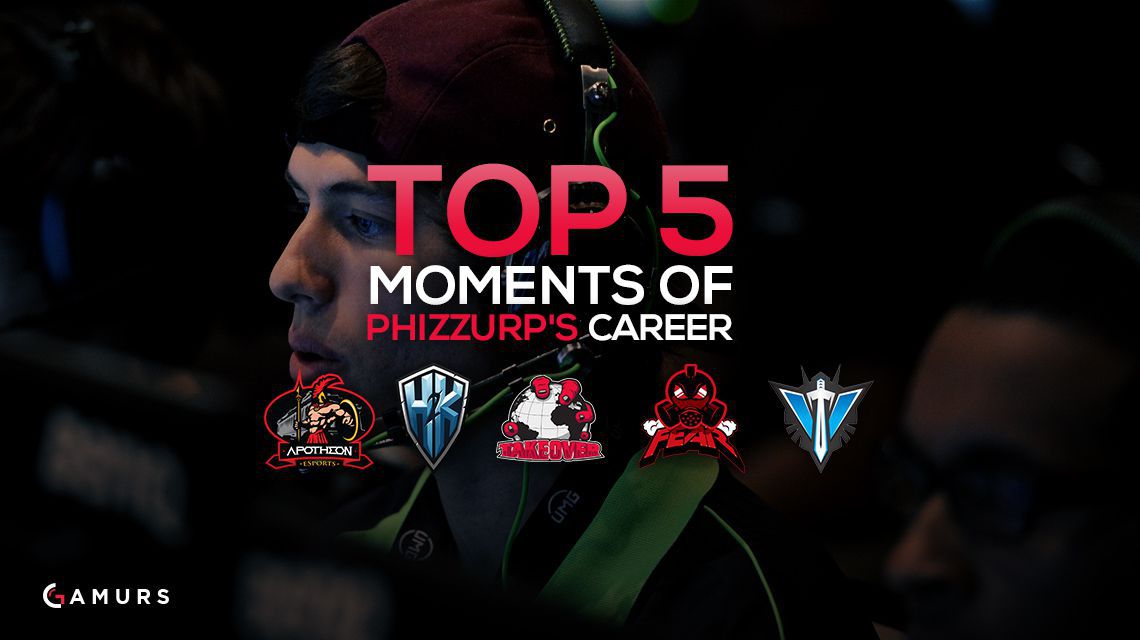 Most nights, I like to watch a few YouTube videos or Twitch streams on my phone before I go to bed. Last night, while scrolling all the way through my “favorites” list on YouTube, I found “Takeover vs. Collapse Map 3,” a video from 2012 by Philip “PHiZZURP” Klemenov. This led to me watching several more PHiZZURP videos, including all of the Search and Destroy Clinics. The next thing I knew, it was 3am ET.

PHiZZURP has always been one of my favorite Call of Duty players to watch, especially since I learned so much about Search and Destroy just from watching him back in the day. As a tribute to his legacy, I think it is way overdue that I rank the top-five moments of PHiZZURP’s career. I’ll be ranking these moments from five to one, with one being the top or most important moment, in my opinion.

This is an article that I’ve wanted to do for a while, but I think right now is the perfect time to remind everyone of some of PHiZZURP’s greatest moments. So, without further ado, here are the top-five moments of PHiZZURP’s career.

5) Apotheon qualifies for the CWL

Just after the launch of Call of Duty®: Black Ops III last November, the first season of the Call of Duty World League was announced. On Dec. 4, 2015, 16 teams were invited to compete in the first CWL North American Pro Division Qualifying Invitational Tournament, where eight teams had the opportunity to qualify for the CWL.

The teams were split into four groups, with four teams in each, and the format allowed for two teams from each group to qualify; two losses would result in elimination from the tournament. For this event, PHiZZURP was a part of Apotheon Esports’ first roster, playing alongside Damod “FEARS” Abney, Tyree “Legal” Glover and Andres Lacefield. PHiZZURP and Apotheon were placed into Group A to compete against OpTic Gaming, Enigma6 Gold and Team Orbit NA.

Coming into this event, almost everyone predicted that OpTic would have no problem winning this group. Additionally, basically everyone believed Enigma6 would take the second spot from this group, completely writing off Apotheon and Orbit. E6 had a strong roster, consisting of Doug “Censor” Martin, Bryan “Apathy” Zhelyazkov, Renato “Saints” Forza and Kenneth Dedo, so it was no surprise that people expected this talented team to qualify for the CWL.

Well, PHiZZURP and Apotheon had other plans. Proving all of the naysayers wrong, Apotheon 3-0 swept Enigma6 Gold, sending them down to the losers bracket. Apotheon then had the difficult task of taking on OpTic, and the Green Wall was just too strong, defeating PHiZZURP’s squad 3-1.

Apotheon still had a chance to qualify if they could win the losers bracket finals of their group. Orbit shockingly upset Enigma6 Gold, so Apotheon had a new challenger with a spot in the first season of the CWL on the line. PHiZZURP and company took the 3-1 series win over Orbit to cement their spot in the CWL.

This was definitely a historic achievement, as PHiZZURP and his team defied all odds by bringing Apotheon’s name into the spotlight as a new organization in the premier Call of Duty league.

In January, just two months after the previous moment, H2k-Gaming bought the Apotheon Esports roster that qualified for the inaugural season of the CWL. The league proved to be a different demon for PHiZZURP and company, however, as H2K ended the regular season in 11th place with a record of 7-15.

As such, after almost three months of competing in the CWL, H2K now had to requalify for the second season of the CWL through the relegation tournament. The four teams with the worst record in the first season of the CWL were set to face off against the top four challenger teams from the amateur circuit at the beginning of April.

H2K faced a tough task, going up against arguably the best challenger team in Team Liquid. With a roster consisting of Apathy, Jeremy “StuDyy” Astacio, Joe “MerK” DeLuca and Matthew “Burns” Potthoff, Team Liquid was one of the favorites to qualify for the second season of the CWL. Several players on this team received offers from current CWL teams throughout the first season of play, but these guys decided to stick together and try to qualify on their own; so anything less than success would be a catastrophic disappointment.

Even before the series started, most people counted H2K out, with caster John “Revan” Boble adamantly predicting a 4-0 sweep by Liquid. Well, once again, H2K set out to prove to everyone that they were here to stay.

They didn’t get off to the best start in this series, however. In fact, it couldn’t have gone much worse for PHiZZURP and company. Liquid jumped out to a commanding 3-0 series lead, after taking wins on Fringe Hardpoint (250-180), Infection Search and Destroy (6-2) and Evac Uplink (13-7).

But then, the tables turned in H2K’s favor. A much-needed 4-2 win on game four Breach Capture the Flag helped spark the H2K comeback. H2K followed that up with a crucial 6-4 win on Hunted Search and Destroy to take their second consecutive game. Map six was Hardpoint on Stronghold, which H2K dominated 250-93, thanks to PHiZZURP’s 39-20 scoreline with two minutes of time in the hill.

Finally, with the series tied at three games each, H2K forced a definitive game seven of Search and Destroy on Redwood. H2K earned the initial round wins, as the realization of a reverse sweep finally started to materialize in the thoughts of Liquid. But Liquid would not go down without a fight, as the teams started to trade rounds back and forth. Then, H2K put the final nail in the coffin, defeating Liquid 6-4 in game seven to take the 4-3 series win.

This was a huge moment in PHiZZURP’s career; not only did he help H2K keep their spot in the CWL, but he was also a part of one of the greatest comebacks in Call of Duty history.

3) The creation of TKO

While this might not necessarily be one particular play or game in PHiZZURP’s career, I firmly believe that his creation of the Takeover brand/organization is definitely one of the most meaningful “moments” of his career.

Back in 2012, MLG unfortunately decided not to host a pro circuit for Call of Duty®: Modern Warfare 3. This meant that professional Call of Duty players, like PHiZZURP, needed to compete in online tournaments or stream and make YouTube videos in order to continue their gaming careers.

PHiZZURP definitely benefited from this, building a very successful YouTube channel and Twitch stream. But, he didn’t stop there. PHiZZURP played in hundreds of online Search and Destroy tournaments or GameBattles matches, and created his Takeover, or TKO, team. Playing with the likes of “PaTron” and “Shucklez,” PHiZZURP took the Search and Destroy community by storm, competing with the best of the best in his quest for the top spot on the GameBattles team ladder. Playing with his Search and Destroy friends, as well as several pros and/or former teammates, TKO won the summer ladder for MW3 on GameBattles.

Beyond this, the TKO brand will always be a part of PHiZZURP’s legacy in the Call of Duty community. Thousands of fans and players watched his gameplay and learned from his great tactics. His strategic mind and clutch gene will always been remembered through the multitude of highlight reels or full-length gameplay videos. Plus, TKO will continue to live on through everyone who played for the brand, as well as any fans who were a part of the community back then and grew up watching PHiZZURP takeover the Call of Duty scene.

The last two spots on this list were the toughest to differentiate between. I truly wanted to put MLG Raleigh 2011 in the No. 1 spot, as everyone’s first tournament victory is very memorable. But, PHiZZURP has another specific moment in his career which he claimed to be his favorite, so Raleigh will have to settle for No. 2.

PHiZZURP was on Team FeaR for Raleigh, playing alongside Robert “ASSASS1N” Walsh, Johnathan “John” Perez and Eric “Twizz” Servello. FeaR entered the tournament as the third overall seed, following a second place finish at MLG Anaheim 2011. As the top seed in Group C, FeaR ended group play with a 3-1 record and advanced to the winners bracket.

In the winners bracket, FeaR faced off against the juggernauts of OpTic Gaming. But PHiZZURP and company upset OpTic 3-1 to advance to the winners bracket finals. Here, they played against Team EnVyUs, who they also defeated 3-1, cementing their spot in the grand finals.

In the grand finals, FeaR faced off against Cinderella story apeX.Collapse, who had upset many of the top teams at this event. FeaR would not be denied, however, as they made quick work of Collapse in a 3-0 sweep to secure their first championship in Call of Duty®: Black Ops. This was PHiZZURP’s first career championship in just his second event under the FeaR organization, which truly is a remarkable achievement considering this is when PHiZZURP really started to make a name for himself.

Like I said before, PHiZZURP stated that his favorite moment in his career was UMG Dallas 2013, so how could I go against the man himself? At the end of the Call of Duty®: Black Ops II season, UMG decided to host an event on the same weekend as the 2013 MLG Fall Invitational. With four of the top teams in Black Ops II attending the MLG event in Florida, everyone else packed their bags and headed to Dallas, Texas.

At the time, PHiZZURP was on VanQuish Gaming, playing alongside Dedo, John and Kale “Schillez” Schillein. Surprisingly, vQ was upset relatively early, losing in round two to K.G Adversity. This meant that vQ needed to make the long and treacherous journey through the losers bracket.

In the losers bracket, vQ easily dispatched of No Escape, Aftershock and Dare. Then, in round five, vQ met up with Strictly Business, who they defeated 3-1, advancing to round six against Team EnVyUs. EnVyUs had a very strong roster and was one of the favorites to win this event, but vQ completed the upset, defeating them 3-1 and eliminating the Boys in Blue from the tournament in fifth place.

vQ’s impressive run through the losers bracket culminated in the grand finals against a strong SoaR Gaming team, led by Tosh “StaiNViLLe” McGruder and Saints. In order to take home the hardware, vQ needed to defeat SoaR in two best-of-five series.

And this is exactly what they did. vQ won the first series 3-2, after an impressive 6-3 win in game five, Express Search and Destroy. After the bracket was reset, vQ carried all of the momentum in this matchup, jumping out to a big lead with wins on Yemen Hardpoint and Meltdown Search and Destroy. SoaR kept their tournament hopes alive with a win in game three on Standoff Capture the Flag, but it was not meant to be, as vQ clutched up in game four, Hardpoint on Standoff, to secure the UMG Dallas 2013 championship.

Considering their incredible losers bracket run, it comes as no surprise that this was PHiZZURP’s favorite moment in his career. Going from a loss in the second round of the winners bracket to defeating everyone in the losers bracket and winning two best-of-fives to win the tournament makes this arguably one of the greatest tournament runs in Call of Duty history.

PHiZZURP had a remarkable career that ended too quickly, but he will never be forgotten as long as we have all of these great moments to remember him by.

What do you think was the greatest moment of PHiZZURP’s career? Let us know by commenting below or tweeting us @GAMURScom.