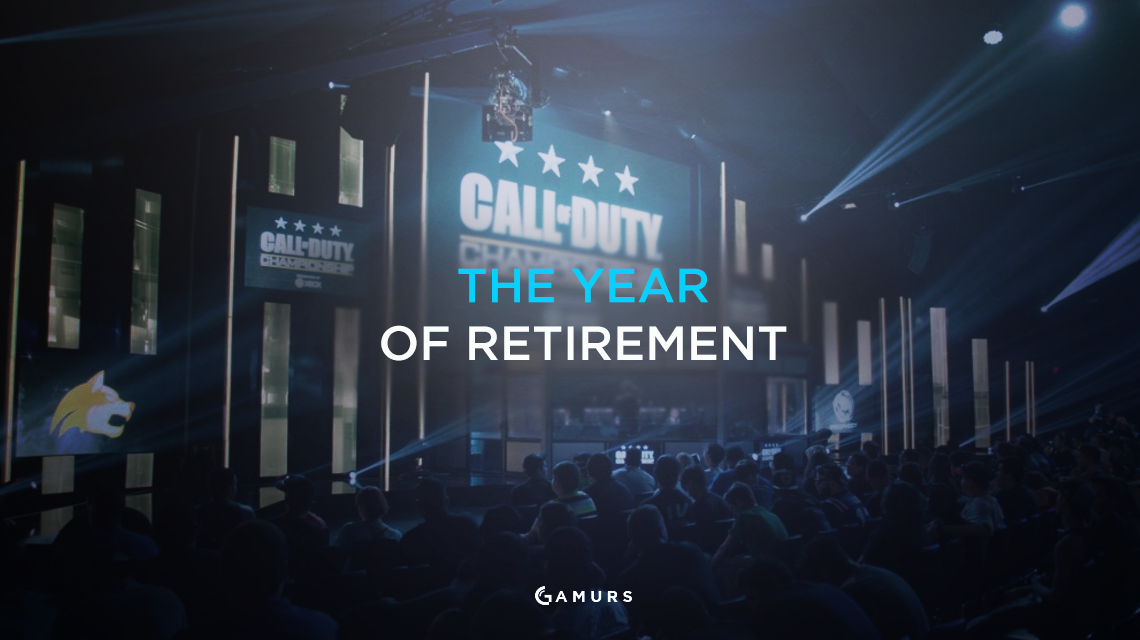 The Call of Duty®: Black Ops III game cycle certainly provided us an entertaining year of Call of Duty action. It began with Activision stepping up to the plate and giving unprecedented support to their flagship video game series, proving that esports really are the future. The benefits included increased prize pools, worldwide recognition, and new blood at the top tier of the game. The consequences? That new blood has caused old-time pros to lose the drive to compete and be replaced.

Competition is the heart of every sport and Call of Duty is no different. From year to year, the game has changed and the faces with it, but many of the pro players we see now have been involved since the beginning. It is a testament to their skill that pro players manage to keep up each year when the game completely changes. Contrary to the belief that Call of Duty releases the same game over and over, the competitive side of it changes drastically, with different game modes, new weapons, and the addition of concepts like specialist abilities.

This truth led Activision CEO Eric Hirshberg to tell ESPN, “that makes CoD esports athletes the most elite… Because not only do they have to be the best, but they have to constantly adapt to each new iteration of the game.” These changes, however, allow some players to excel and cause some to decline. This is not to say that players completely fall off, but as we’ve seen on Black Ops III, young players are increasingly finding their way onto top rosters while longtime pros are falling to the wayside.

Last year, Matt “NaDeSHoT” Haag’s retirement shook the community, though his departure made way for Damon “Karma“ Barlow to join the OpTic Gaming roster and help them become the most successful team in the game two years running. This year, an even larger number of pro players decided to call it quits, including several Call of Duty champions.

In early April, Joe “MerK” Deluca decided to end his career as a professional Call of Duty player; a career that is one of the longest and most storied to date. MerK was a staple player on OpTic Gaming at the beginning. In 2010, he began playing under OpTic and a year later won the very first Call of Duty XP, along with the largest prize pool in Call of Duty at the time.

He later played under Team EnVyUs for an extended period of time. But the end of his career was tumultuous. Playing under multiple organizations until sticking with Team Liquid, MerK was unable to make it into the Call of Duty World League. It was soon after failing to qualify the second time that MerK made the decision to quit.

He didn’t go far, however. Soon after retiring, MerK announced he would be working with Major League Gaming. As an Ohio native and Call of Duty player for years, MerK had built a close relationship with Major League Gaming, making his decision a perfect one. Since then, he has been involved in organizing events with MLG and has even been seen as a desk analyst for several MLG hosted tournaments, as well as the 2016 Call of Duty World League Championship. Like MerK, other retired players can still be found within the scene.

Like MerK, Tyler “TeePee” Polchow had a storied career. His achievements can also be traced back to 2010 on Modern Warfare 2, but his greatest successes came on Black Ops II when TeePee became part of compLexity Gaming. With consistent first place finishes under compLexity and later Evil Geniuses, TeePee and company created one of the greatest storylines in Call of Duty history, not to mention a dynasty that has not yet been outdone.

TeePee is a Call of Duty champion (winning it in 2014 on Ghosts), but his high placings discontinued soon after he earned that distinction.

With Team EnVyUs throughout Black Ops III, TeePee did play in the Call of Duty World League. But a surprise came right before Stage Two began when both TeePee and Patrick “ACHES” Price were dropped from the roster. At the time it seemed strange, but in retrospect, the addition of Bryan “Apathy” Zhelyazkov and Johnathon “John” Perez to the nV roster made all the difference; it turned them into a monster of a team that went on to win the 2016 Call of Duty World League Championship.

After being dropped and with little time before Stage Two began, TeePee mentioned retiring from playing, but then suddenly found himself on Luminosity, who was also in the World League. Unfortunately, the team had alternate plans and TeePee soon found himself without a home again. This led him to finally call it quits.

Soon after retiring, TeePee put out several highly revealing videos that spoke about professional Call of Duty from behind the scenes called “TeeP’s Truth.” In one video, he spoke about what led to his retirement, and in another series called “Tips with TeeP,” he gave gameplay advice. What we learned from his videos is that his drive decreased as time went on, a trend seen amongst many players who retired.
Luckily for fans, TeePee has not gone far. Call of Duty is his forte and his abundance of knowledge has not gone to waste. Thanks to Major League Gaming, TeePee has been featured on several analysts desks alongside MerK and Replays.

Out of the players who retired this year, James “Replays” Crowder was the most recent Call of Duty champion. He won the top prize in 2015 on Advanced Warfare with Denial, but soon after, the team split up. Replays continued earning decent placings and also played in the Call of Duty World League on Black Ops III under Luminosity.

Like the others, Replay retired from playing in early 2016. Also like the others, you can still find Replays heavily involved in the Call of Duty scene. The first new role we saw him in was as FaZe Clan’s coach. As such, Replays is advising two former Denial teammates, James “Clayster” Eubanks and Dillon “Attach” Price. He has attended multiple events as well, but not in the capacity of a coach. Instead, he has joined MerK and TeePee on the analyst desk at MLG events and the Call of Duty World League Championship. The three of them, with years of professional level experience, have been able to provide a wealth of insight for fans watching tournaments at home, greatly increasing the value of the broadcast.

Also retiring from competitive play this year was Matthew “Burns” Potthoff. Perhaps he is best known for his time on Curse during Ghosts, but Burns played with Automatic Reload and Rise Nation for an extensive period of time as well.

Burns, with a Bachelor’s Degree in Entertainment Business, decided to put his knowledge and experience to good use and is now part of the management team for eUnited, a new esports organization that currently has teams in Call of Duty, CS:GO, and Gears of War. On top of his management role, Burns is serving as coach for eUnited’s teams at events.

What is Team Kaliber without Brandon “Sharp” Rodgers on the squad? Sharp has been playing Call of Duty just as long as anybody, and has some of the best early achievements of players on this list. In the original Modern Warfare, Sharp was part of the Xtravagant team that won an MLG National Championship.

In 2013 when Team Kaliber was created, Sharp was among the first group of players on the roster along with Jeremy “Neslo” Olsen, Jevon “Goonjar” Gooljar-Lim, and Dylan “Theory” McGee. This group in particular has played together arguably for a longer period of time than any other full team. In some ways, their desire to stick together hurt them. In fact, Sharp never played for another organization after joining tK.

While Sharp and Team Kaliber had some great moments, they were never considered a top contender and were seldom seen in the finals of events (edit: outside of Black Ops II and Ghosts). However, you could always find Team Kaliber in the Pro League and, this year, in the Call of Duty World League. It was due to an unfortunate travel issue that Goonjar could not make it to the Stage One relegation tournament and Team Kaliber was relegated. This dismantled the roster, and soon after, Sharp chose to retire from the game competitively.

As a founding member of Team Kaliber, Sharp can still be found playing Call of Duty and other video games, living the life of a content creator.

The list of former Call of Duty Champions retiring from the esport may soon grow, depending on how this coming year pans out for them. Several players have already made comments alluding to their eventual retirement, including Adam “KiLLa” Sloss and ACHES.

Will they actually retire? It’s hard to tell. In esports, players tend to retire at a relatively young age in comparison to traditional sports. Burnout is typically referenced as the reason, and both KiLLa and ACHES, as well as a handful of other pro players, have been playing at the top level for long enough that burnout could easily be an issue for them. Luckily, there are plenty of options for them after retiring from playing, and the community would be happy to have them stick around the scene should they chose to fill another role.