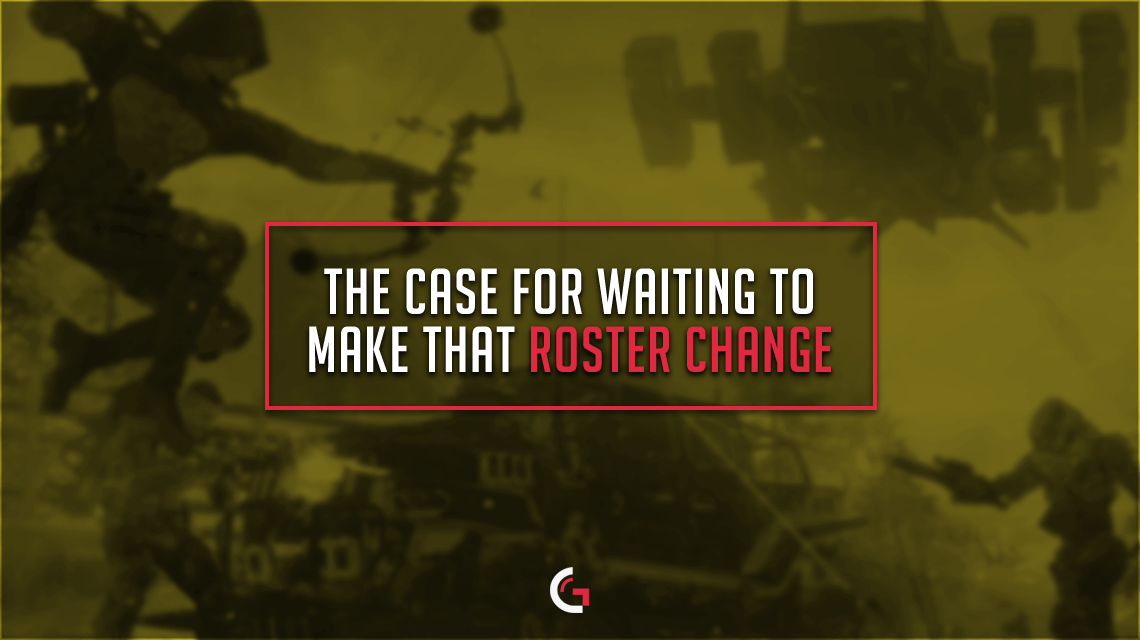 European Call of Duty has been an utter mess this week. One roster change typically spurs another, and that’s exactly what has happened. From the break up of Infused to the confusing changes to Splyce’s roster, very few European teams look the same as they did a few weeks ago at the 2016 Call of Duty World League Championship; the chain of events we’ve witnessed affected nearly every top team in European Call of Duty and more changes may be coming.

In my opinion, all of these roster changes are practically pointless. The Black Ops III game cycle is nearly over and European teams have no upcoming events to look forward to, which means they are preparing for Infinite Warfare. That’s the problem. Right now, we barely know anything about Infinite Warfare and neither do the players.

Sure, from the brief amount of time spent playing the new game at Call of Duty XP, we know the movement system might feel a lot like the one in Black Ops III, but that doesn’t mean a lot. Are the majority of the maps large or small? What will the pace of the game be like? How is the gun balance? These questions, and others like them, will not be answered until, at the very least, the beta period begins. Once players get the feel for the game, their ideas on who might make a good teammate may change and the rosters forming right now might not last. Like every year on every new game, some players excel and some fall off. Expect that to happen again this year.

Due to the circumstances of some of the major roster changes, we know that players have made moves based on team cooperation. For example, it was revealed that Splyce, despite making history and placing second at the Call of Duty World League Championship, had an abundance of internal issues. Players, apparently, were not getting along for the majority of the year and would go days at a time not practicing together. They still managed to place well at nearly every event they attended, showing that team cooperation and team chemistry are actually two different things. The players obviously meshed well, but they just couldn’t get along well enough to stick it out going into Infinite Warfare.

The new Splyce roster, a combination of Splyce and Millenium, is surely made up of European superstars. They know each other well and likely play together well, but they don’t know what Infinite Warfare will be like or what roles they will have to undertake, and luckily for them, neither does anyone else. I just fear that if roster changes are occurring purely because of changing friendships, then players are missing the point.

Competitive Call of Duty has come a long way. Players used to come up with their own team names and find their own way to events – now they have organizations that provide them with jerseys, sponsors, and paid travel. Now, their job is to win. Playing with someone just because you are friends is no longer practical, as there is much more to it than that. Players need to communicate well, to play complementary roles, and to establish a team leader. Of course, if those necessities are covered, then friendship is the icing on the cake.

You don’t need me to tell you that friendship can lead to better cooperation and that cooperation can lead to better results, so I’ll let the research tell you instead. From a paper coming out of Vienna University of Economics and Business, “Researchers argue that intra-team cooperation is a crucial process through which a team can improve its performance.” The research also shows that when conflict arises, solutions are found easier when team members cooperate. Seems like a no-brainer. This is the reason why teams, although they may be performing well, choose to make roster changes when team cooperation is at a low. They feel that at that point, they can no longer improve and will stagnate.

On the opposite end of the spectrum are teams that stick together too long. Take Team Kaliber for example. Sharp, Theory, Goonjar, and Neslo. These four players have teamed on and off together for the past four years, and through it all, saw very few top placings. Their greatest achievements together were probably their first, when they placed second or third at nearly every event from the end of Black Ops II and the beginning of Ghosts. Since then, it’s all been downhill for Team Kaliber, but the players keep returning to each other because that’s who they are comfortable with.

Another similar situation may be FaZe Clan, who have stuck it out for over a year now. They competed with OpTic for first place at nearly every Advanced Warfare tournament in the last half of the year, but failed to make it to the finals of a single Black Ops III event. Many are calling for a roster change for FaZe, but at the same time, others understand why they have not done so yet: Infinite Warfare is on the horizon and it’s a brand new game.

Will the European rosters last? Will FaZe ultimately break up? Right now, it’s too early to tell, and that’s my point.

Josh Billy is a long time Call of Duty fan and can be contacted at [email protected] or on Twitter <a href="http://twitter.com/orbitch3mistry” target=”blank”>@Orbit_CH3MISTRY.