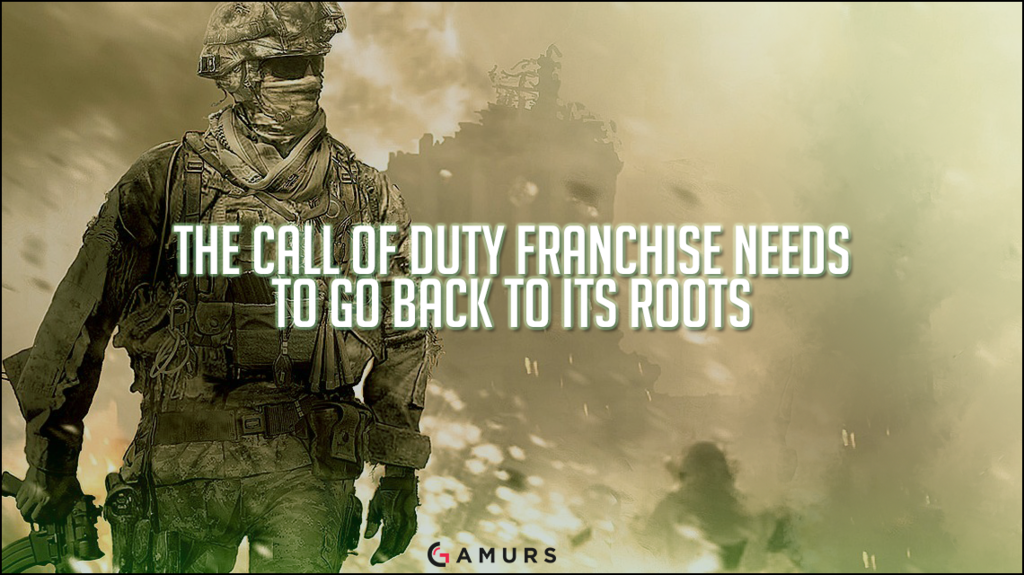 At the beginning of November, I wrote a piece saying that I thought that it would be prudent to give the developers of Infinite Warfare a chance. There was a lot of the same complaints, as ever, in the air: “Call of Duty is dying.” “Viewership is at an all-time low.” “I’m tired of all this wall-riding and jetpacking crud.” None of those comments are things that we haven’t heard before. I came into this year of Call of Duty feeling hopeful that Activision and Infinity Ward would do their best to give us a competitive game that was as fun to play as it is to watch.

It’s been roughly three months now, though, and as much as I really want to believe that the developers are doing their best, it’s getting harder and harder to keep the faith. However, I don’t know if that’s Infinity Ward’s fault.

I spent time gaming with some friends a few nights ago, and in between matches of Battlefield One Conquest mode, Call of Duty came up as a topic of discussion. While expressing his displeasure about where the game has gone over the past few years, one of my friends said something to me that has stuck hard in my head. He told me, “This isn’t Call of Duty anymore. There’s no trace of what Call of Duty used to be in this (insert expletive here) game. This is a Halo and Titanfall rip-off. They had a working formula for good quality games, and they were only getting better, so why did they try to fix something that wasn’t broken?” I couldn’t help but agree with him, as did the other three guys that were there hanging out with us. It’s not like it’s a mystery to the developers how the community – both casual and competitive – feels about the state of Call of Duty. Why would Infinity Ward and Activision include Call of Duty 4 Remastered as part of the bundle unless they knew that we wanted a boots-on-the-ground, old-school, gritty shooter? This made me think a bit about the reasoning behind why Activision does what they do, and my opinion is that it might be an economic decision.

I understand that once a developer makes changes in the game mechanics – especially ones as large as adding boost jumps and power-sliding – it’s difficult to undo those changes. The nature of the Call of Duty franchise is that the gameplay itself is pretty much the same from game to game, and that’s necessary when you look at Activision’s game production model and timeline when compared to the industry standard. Having one title per year requires making innovative changes to the gameplay every year so that they can sell more copies of the game. Boost jumping was an innovative idea, and I’ll even admit it was fun at first, but like my friend put it above: it’s not Call of Duty. It’s giving up the identity of the franchise in the name of attempting to innovate for sales. The Call of Duty business model puts Activision in a bit of a pickle; they have to make innovative changes, but you can’t move backwards because you need the game to be essentially the same to previous and future titles because – despite the yearly releases – it’s actually supposed to be the same core Call of Duty game. Therefore, if they introduce something that doesn’t work, it’s extremely difficult to do anything about it after the fact.

Most FPS franchises don’t produce yearly entries – in fact, it’s atypical for the industry as a whole. Barring yearly sports game franchises (Madden, NHL, MLB The Show, FIFA), Call of Duty, and a few other triple-A titles, most developers produce on a schedule of a new game every other year, or even less often. In my opinion, this leads to a better gaming experience, due to the quantity vs. quality tradeoff; for example, see League of Legends, Counter-Strike, or even a non-esports title like Grand Theft Auto V. You take a game, and you build on what you have at release with extensive DLC and features that not only extend the life of the game, but increase the quality of the overall product.

However, Activision can’t do that at this point in time, and there’s one simple reason behind it: money. The business model of Call of Duty is simple and hasn’t really changed much since the early days of the franchise: sell as many games as possible, and sell as much DLC as possible. The one-game-a-year strategy maximizes the number of games they sell, because as the premier console FPS (sorry Overwatch, Halo and Battlefield) a consumer has to purchase a new game every year to remain current.

Other games have adopted a different strategy: sell a game once, and then monetize the in-game experience. This has been an exceptional strategy for Counter-Strike in the form of their “skin” market, and it’s something that has found its way into other FPS games in a major way. However, they have failed to realize that there is a big gamble in monetizing outside of the initial purchase; the quality of the game can suffer severely if the execution of the monetization affects gameplay in any way. Counter-Strike executed their rollout of additional pay-to-play in-game experiences in a way that did not negatively affect the people who did not purchase the DLC, and the in-game “weapon skins” do not affect gameplay. This “purist monetization” strategy worked perfectly for Valve; considering that Counter-Strike: Global Offensive came out in 2012 and the game itself is very inexpensive compared to comparable FPS titles, they have managed to draw massive profit margins through nearly exclusively relying on the in-game market (though the strongest feature, the Steam Marketplace, which allowed skins to work as a de facto electronic currency, was as much a success for them as it was their Achilles heel).

Other developers have also adopted similar strategies or hybrid strategies. Activision has also tried their hand at in-game monetization with Call of Duty; however, while it has potentially boosted their profits, they have failed to execute it in a way that does not penalize the average player. Their DLC weapons and maps give advantages if someone is willing to pay for it, and lowers the amount of enjoyment one can receive from the game if they don’t; this has been especially a problem in Infinite Warfare. (Don’t believe me? Try the Peacekeeper from Black Ops II. My K/D improved from 0.75 to over a 1.5 after they introduced it.) That said, Activision has also implemented a decent strategy with Overwatch with free DLC and pay-only-if-you-want-to loot boxes, as well as their decision to keep the in-game monetization in Call of Duty 4 Remastered to cosmetic changes only in the form of weapon skins.

With all of that said, do I think Call of Duty will move to something besides a one-game-per-year system? No, I don’t. As the initial purchases of the game are the primary source of revenue for them as a developer, I don’t think they could stand to lose that kind of money. They lack the logistics that Valve has had built in for the full skin economy, so they couldn’t switch entirely to that system either. I believe there is a happy medium somewhere in the middle, where customization and additional in-game experiences can happen without penalizing the casual or penniless player. I think that is something that Activision can strive for in future games, and I believe it is something that would help the experience. Additionally, the stigma of a “backwards step” in gameplay mechanics – namely, removing boost jumping and “enhanced movement” – is something that should be pushed aside by Activision in their business strategy. It’s the “back up your computer” strategy; if something isn’t working and you can’t find a solution, sometimes the best strategy is to revert to the last-known good configuration.

There are rumors – unsubstantiated, yet prevalent – that Activision may come through for us next year with exactly what we were asking for: a boots-on-the-ground game that brings back the good ‘ole memories of playing Team Deathmatch in my friend’s basement while gorging ourselves on Diet Faygo (their grape soda is pretty delicious, and drinking it does not make me a Juggalo) and KFC. I want to point out something though: the boots-on-the-ground mechanics do not guarantee that the game will be good, nor do the “enhanced movement” mechanics guarantee that a game will be bad. I still have hope for Activision, because if the game is polished and balanced, and some rich kid doesn’t melt me with a pay-to-win weapon (that has been the cornerstone of recent Call of Duty games), then the game will probably be just as good as we all remember it can be.

Would you like to see Call of Duty go back to its roots? Let us know by commenting below or tweeting us @GAMURScom.