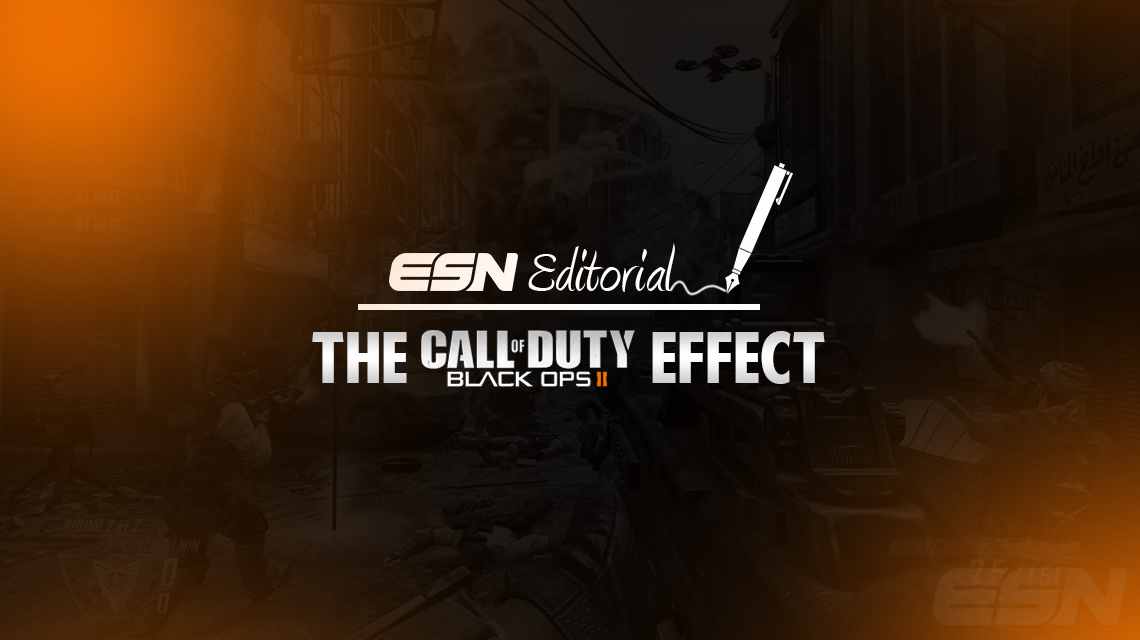 Treyarch Studios’ Call of Duty®: Black Ops II title ushered in a new era of Call of Duty eSports, becoming the topic of discussion on how competitive CoD should be among players, spectators and developers alike. A year after Black Ops II brought CoD eSports through the ranks, it handed the reins off to Infinity Ward’s Call of Duty®: Ghosts.

Lots of speculation surrounded Ghosts in its early days, followed by the game’s tremendous amount of criticism, which didn’t conclude until the release of Sledgehammer Games’ Call of Duty®: Advanced Warfare. By the time Advanced Warfare came out, the community abandoned their discussion on Ghosts and moved onto the new game.

Blitz over Hardpoint and CTF

It did not include Hardpoint or Capture the Flag, both game modes that many say were the biggest part of CoD eSports’ success in Black Ops II, instead being replaced by the highly controversial Blitz. For those who are unfamiliar with the gamemode Blitz, the goal of the game is for a player to dash into the enemy base and score a point by entering into their portal, which would happen the second a player touched it. Many players suggested that the person should have to wait on the portal for a few seconds before actually scoring the point.

Another large complaint on the gamemode was the ability to rally scores, because for those players who were good at working the map and sneaking through, they did not need to win any gunfights to score, taking away the skill aspect. Basically a revolutionary gamemode had been replaced by an extremely flukey one.

Black Ops II put an emphasis on the three-lane map system, which can be seen in maps like Standoff, Slums and Raid. Each one provides three main routes for players to reach the other side of the map. This was an ideal setup for competitive play. In Ghosts, this system can be clearly seen on Freight, and vaguely on maps like Warhawk and Sovereign. Some maps provided two or four lanes. Or a map like Strikezone, which provided no lanes, or maybe it had six or eight? It’s basically a square so you can look at it many ways. Though it was a fan favorite because of the action, in Domination it was sort of like a constant rotation, which is a plus, as it caused plenty of close games, though it was a negative, because I think I’ve spent more time watching the little white bar scroll from the left to the right as we waited for players to cap the fifth flag of that minute, than actually watching the game. Bottom line here, the well designed maps of Black Ops II were replaced by the just designed maps in Ghosts. These are just a few of the reasons Ghosts suffered as a competitive Call of Duty, Though I, or anyone else can list reasons and explain them for every CoD. When looking at the game in a broader structure, it doesn’t seem as bad. Every Call of Duty has suffered from criticism and problems, even Black Ops 2. For one example the weapon balancing came under fire with the rise of the KAP-40s, an extremely powerful akimbo style weapon. This eventually lead to the weapons being banned in competitive play.

For the past few months I have been playing nothing but Advanced Warfare. After becoming bored with the game, myself and a friend decided to switch back to Ghosts, and for the first time in a while, I truly enjoyed myself while playing Call of Duty. This is what inspired me to write this article, while expressing the feelings I was having playing Ghosts, another one of my friends stepped in. He, having sold his copy of Ghosts early in the game’s history, was not with me, and I knew why. He, like most people in the community and myself, regard Black Ops II to be the best competitive Call of Duty game. It is very difficult to do better than the best, this is what I call the Black Ops II effect, and that’s the problem facing CoD eSports. The best way to explain this is through an example. You bought a brand new Ferrari in 2012. The car was great, everything you had hoped it would be and you loved it. Though a year later in 2013 you had to sell it, and replace it with a brand new Nissan. It didn’t do the 0-60 that the Ferrari did, it didn’t have some of the cool features, but it was still a great car. You keep thinking about the Ferrari though, and how it edged out the Nissan. No other car will reach the Ferrari. This is the situation the entire Call of Duty eSports community is in in my mind. We were gifted the Ferrari of Call of Duty with Black Ops II, then slightly downgraded to the Nissan of CoD, a game that was still good, Ghosts, just not Black Ops II. In my opinion we as a community don’t like Ghosts because it’s not Black Ops II. This is the Black Ops II effect I introduced you to before, it has already played out. We might never get anything better than Black Ops II, and as long as we don’t, it will make everything after it look bad.

Each of the games following Black Ops II presented something new to us, whether that’s good or bad is up to you. Am I saying Ghosts is the best Call of Duty, certainly not, but I am saying I don’t hate on Ghosts because it’s not Black Ops II, I enjoy it because it is Ghosts, and that’s the message I’m trying to portray to you. In November, Treyarch will release Call of Duty®: Black Ops III, and they will try to top what they did three years ago. I wish the best of luck to them; it’s certainly not an easy task. Thank You.

Tell us what you think of this persepcetive on Call of Duty; Ghosts. Did your mind shift or do you still believe what you did before? Tweet us on our Twitter.