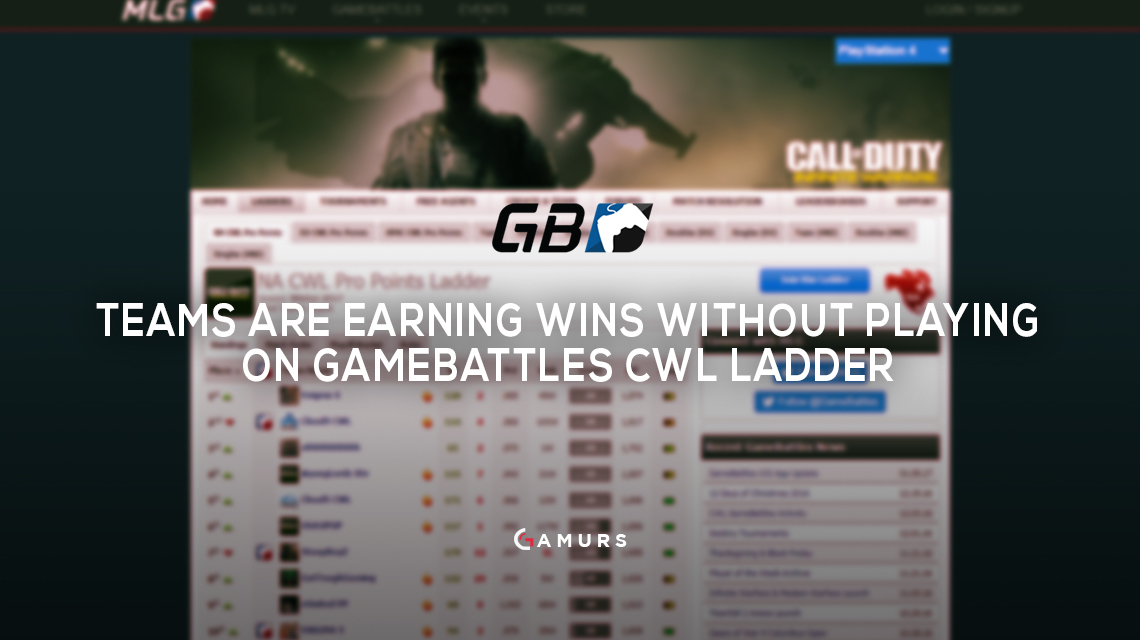 The current Call of Duty World League pro point system has a lot of critics. Professional players have been using the GameBattles platform more than ever before in an attempt to earn as many pro points as possible and increase their team’s rank. Amateur teams are also flooding the ladder, trying to earn points and have a shot at playing against pros.

For every win, players earn five pro points. For their first win of the day, they earn 10. There is no limit on how many points players can earn per day, and they cannot lose any.

These facts have players spending all day long grinding the CWL ladder. They really have no other choice, because their opponents are also playing all day and increasing their rank. Some have suggested altering the system to alleviate the boredom that comes with playing matches that are not as competitive as they should be, and the stress that comes with doing it for 10 or more hours a day.

For example, Alex “AlexGLogics” Gonzalez suggests changes such as:

In another example, FaZe’s Ian “Enable” Wyatt told Dexerto: “I think they should switch to 250 series tournaments and just run a bunch of tournaments daily so the pro teams can get quality practice. How it is right now, the quality of practice is poor because every team is just grinding GB pro point matches against lower skilled teams.”

The main problem for professional players is that they don’t feel they are getting good practice. On the GameBattles ladder, pro teams are running into amateur teams and completely obliterating them. Some amateur teams are not even comprised of players 18 years and older. Although the age limit was strictly enforced in online and LAN tournaments last year, that doesn’t seem to be the case now.

According to Gonzalez, amateur teams are also forfeiting their matches against teams they feel they “didn’t have a chance at beating.”

By forfeiting matches against tough opponents, teams can free up more time to play against easier ones. There is no incentive to stop this practice, because there are no consequences on the CWL ladder for losing, at least not in terms of CWL pro points.

Forfeits have led to some high ranked teams earning a multitude of free wins. As Richard “Ricky” Stacy pointed out on Twitter, Epsilon was somehow able to win three matches in a single 15-minute time frame and then did so again in the next 15-minute window. No Call of Duty match can be completed that quickly, so these wins were surely due to forfeits, as other players, such as Patrick “ACHES” Price and Joshua-Lee “Joshh” Shephard, later pointed out.

Edit: Nearly all forfeited matches are due to players on the forfeited team being under the age of 18, some pros have told GAMURS. CWL rules state that competitors must be 18 years or older. Other teams, professional and amateur, are also earning wins this way on the CWL ladder by following the rules.

Winning matches without playing them is as uncompetitive as it gets. Forget about professional teams not getting good practice by playing amateurs; not playing matches at all provides no benefits.

Something needs to be done to fix this system. Recently, 2K tournaments have been added and a number of LAN events are now on the calendar. However, as teams jostle for seeds going into these tournaments, they must still rely on the GameBattles ladder. Some of the suggestions stated above may fix the problems being faced now. Enable’s suggestion to implement daily 250 series tournaments, which were very common in previous years, would give professional players more practice each night. Altering the number of pro points earned per match based on the opponent’s skill level may also help, but because matchmaking is pretty much random, this would raise concerns about fairness.

As GAMURS has stated previously, the 2K tournaments and LAN events will award more pro points than the GameBattles ladder, and as more of these tournaments take place, top teams will rely less on the grind and focus more on practicing.