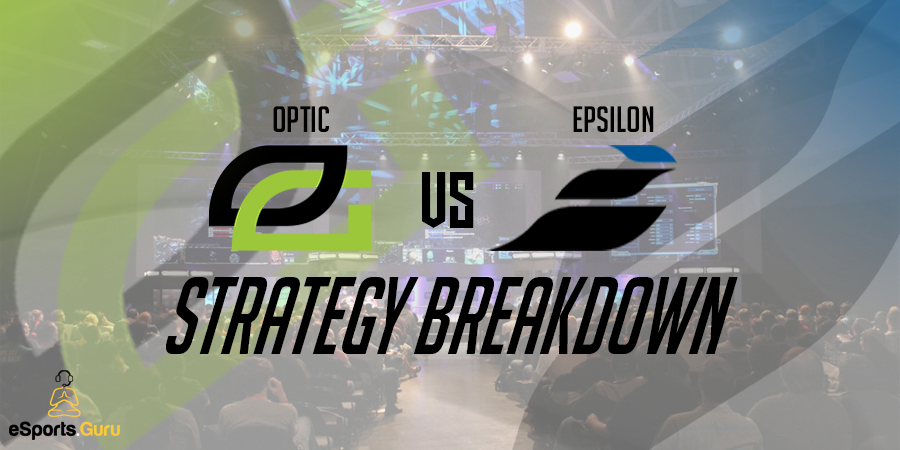 Welcome to my version of a game analysis, where I take great moments from matches and see what people did wrong or right. I don’t claim to be an expert Call of Duty player, but I enjoy theory-crafting about how people play the game. Today’s analysis comes down to discussing play calling in these crucial decider Search and Destroys. Often, small decisions can make or break a game for a team, and I wanted to show how OpTic’s excellent choice of plays allowed them to beat Epsilon in Winners Finals last weekend. I want to start off by breaking down what happened throughout the game, so you can get a sense of the whole strategical choices and big plays that were made.

Round by round analysis:

1st round: Epsilon put bomb down A, Formal wins a 1v1 vs Remy and defuses the bomb.

2nd round: OpTic goes A, they play slow, get the picks one after another, no bomb down.

3rd round: Epsilon go A again, but slow. Optic manage to get the picks and make a hectic scramble as Epsilon try to get away. Remy almost clutches up, but Scump shuts him down in the 1v1.

4th round: OpTic plays slow again, goes A but never plants. They push through and kill everyone one by one.

5th round: Epsilon push A, but OpTic decide to rush right through and die in the A bomb site in about 20 seconds. This results in the first round win for Epsilon

6th round: This, to me, is the 2nd most important round of the game. OpTic go B, trade the kills and just completely take over the site. (I’ll go into depth about this round later). Gyfcat of the round

7th round: This is where Epsilon start to get into the groove. They go A once again. They pick up a crucial pick really early into the round. It comes down to a 1v1 between Scump and Royalty, Royalty finds a great hiding spot on the A stairs and wins the round.

8th round: This is the third most important round of this game. OpTic yet again go B, Scump gets a bit too impatient with his push through the site. Crim can’t get the trade and they go down one by one. Gyfcat of the round

9th round: Royalty gets an insane 3-kill round in a 2v3 situation that should have been a round and map win for Optic.

10th round: Optic play really slow and sit in the base. They end up getting killed one at a time as Epsilon force them to make moves.

11th round: Gyfcat of the round

This is where I want to talk about the strategy and executions of the rounds. If you look at the rounds OpTic won on offense, they looked really impressive; they annihilated Epsilon. In the 6th round, they decide to switch up their game plan after going A each time so far in the game. They go B, one person watched the flank, one person comes through tunnels. Right of the break, 2 people rush to outside B bomb site. Scump usually sits by the door and they are looking for a trade kill inside. The person with him, Karma, sits in a position that he would be seen. This drags Remy or whoever may be covering the bomb out and makes for an easy kill or trade. From there, they all push up, get the kills around the site, allowing them to be in the situation to either plant or win the round easily. It is a simple, yet interesting strategy. In the 8th round, they are late off the break, throwing stuns across the map and the positioning isn’t there for OpTic. Luckily for them, nobody is inside the bomb site. Instead, Epsilon have set up a perimeter with two people set up by the back of the site. Scump rushes in, expecting someone to be there to trade, only to find nothing. Epsilon had perfectly countered this with positioning. Without the trades, Optic falls apart and lose the round.

Despite the 8th round loss, OpTic go back to the same strategy in the last round of the map. In the previous round, they had offense, and due to how the SnD rules are made they are back on offense again. They had gone toward A too slowly in the previous round, got stuck in their base and were picked off easily. Yet, in this round, they change up just enough of the strategy to make it work. Karma and Crimsix rush passed Scump to go to the outside street by B. Remy starts to shoot at Karma, Scump knows where he is, but can’t get the kills. OpTic is down 3v4, but in a favorable position. Epsilon try to swarm in and get the kills, but OpTic have them completely out positioned and are ready. By the time Parasite is on the flank, OpTic have jumped away from the site and are hunting him down over by A.

Overall, This strategy was very reliant on getting close range trades and entry kills into the site. It also relied on the rounds before it; OpTic picked the right moments to use strategy and stuck with it even though it cost them a round in the 8th. Excellent play by them to keep themselves alive in the winner’s side of the bracket.