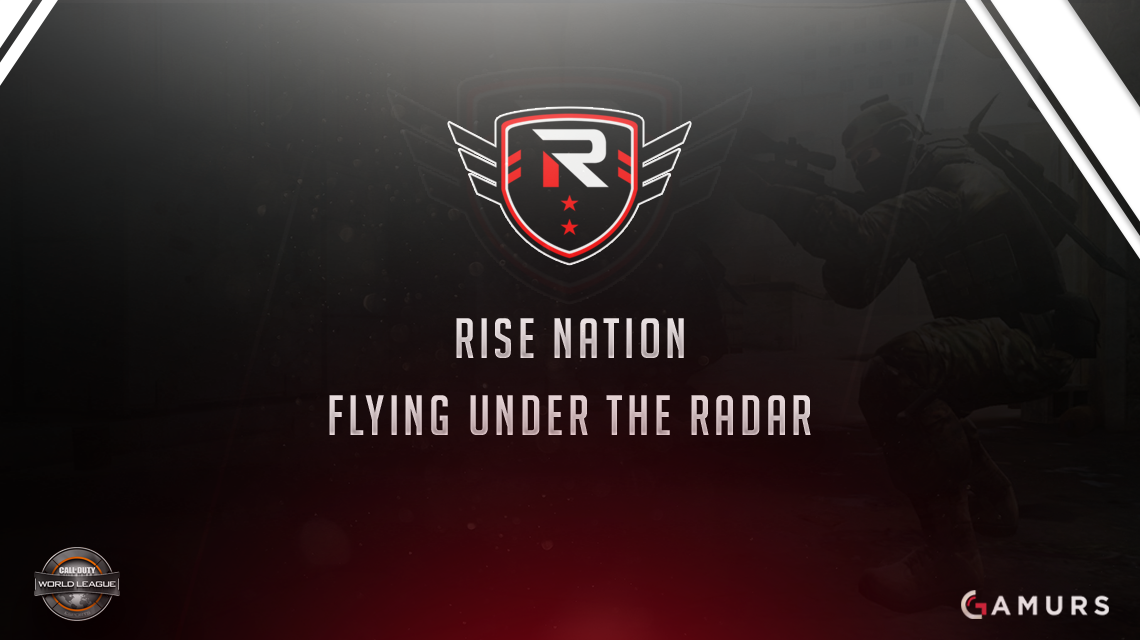 They are the second best team in the world, but unless you follow Call of Duty religiously, you wouldn’t know it. They avoid the hype, letting OpTic Gaming bathe in it. Instead, they show up, they play, and they win.

Rise Nation put together a roster that was simply never predicted to be a championship contender. Daniel “Loony” Loza, Nick “Classic” DiCostanzo, Josiah “Slacked” Berry, and Sam “Octane” Larew. None of whom recorded a significant LAN victory before teaming together. Forming just weeks ahead of Call of Duty®: Black Ops III releasing, however, Rise Nation won the first event they attended. Sure, the majority of the competitive community discount the Totino’s Invitational; It was played less than a week after the game’s release and several pros had barely touched the game before attending. Rise Nation still won, and it was not a fluke.

Soon after, Rise Nation qualified for the Call of Duty World League with ease. They continued their flawless streak at UMG South Carolina, yet once again, the event was dubbed a failure and the victory was all but forgotten. However, Rise has placed outside of the top 3 only twice throughout all major competition on Black Ops III, and both times were for online events.

“We were all on teams before we formed that were right there next to winning, we would all get so close but we would fall just short. We all have the same mindset and that is to win as many championships as we possibly can this year,” said Slacked.

Prior to joining Rise, Slacked found his most success on Advanced Warfare with Team eLevate. He placed 3rd at the X Games and the MLG World Championships, with his only 1st place finish coming at MES Detroit 25K. Now that he is 18, this year will be the first that he is eligible for the Call of Duty Championship, and he is in prime position to make it count.

Rise’s achievements have earned them recognition as the second best team in North America and likely worldwide, yet they are not celebrated like the current champions OpTic Gaming or other old-school Call of Duty organizations such as FaZe Clan and Team EnVyUs. What will it take for the focus to shift towards them? For starters, they could beat OpTic.

In all fairness, Rise began their current rivalry with OpTic by defeating them in the Totino’s finals 3-2, but since then, they have only claimed one more victory. The fateful day was in the first week of CWL Stage 2 and Rise won 3-1, if you must know. Outside of this, Rise has lost two CWL matches, two Challenge Division $25K finals, and the CWL Stage 1 Finals to the Greenwall. OpTic is considered the best team in the world and they have been for the better part of the past year. They are a team full of superstars playing for an internationally recognized organization and when they play, viewership flourishes. The same can not be said for other teams.

“We lost to [OpTic] at Stage 1 [Finals] by 5 seconds in round 11 of the grand finals map 7,” explained Slacked. “If that doesn’t prove to people that we can compete with the best team in the world then I don’t know what will.”

Rise were incredibly close to winning the Stage 1 Finals, and if they had, maybe the rankings would be reversed. However, they did not have the opportunity to rematch OpTic at ESWC because they fell in the semifinals to Splyce, a European team who they had defeated in the group stage of the tournament. Splyce went on to be demolished by OpTic, while Rise played in the 3rd place match against Millenium, a team many call the best in Europe. Millenium won the EU Stage 1 Finals and had defeated OpTic during the group stages at ESWC, proving that European Call of Duty is not so far behind after all. Rise had a tough time with them but ultimately took the win, meaning they have only lost a LAN series twice this year.

Perhaps it is not the lack of significant victories over other top-tier teams that keep Rise Nation out of the spotlight, but their smaller fan base. The players all have decent Twitter followings, but most Call of Duty professionals do. Loony, Slacked, and Octane stream on Twitch and the latter two also maintain fairly consistent YouTube channels, but there is where the problem lies. Fairly consistent is just not good enough. Players have learned from years of playing that in order to make professional gaming a career, other forms of income are necessary, and in this industry, the go-to method to do that is to become well-known on Twitch and/or YouTube. This is the very reason why OpTic Gaming is such a successful brand. Members past and present built the organization and in return the organization built them. Nadeshot. H3cz. Flamesword. These names transcend esports, and that is why they thrive.

Growing the brand is probably the biggest challenge because it takes time.

“You have to do a lot of other things to gain fans other than winning. You have to apply yourself in many other areas to sustain yourself and to live a comfortable life,” Slacked said.

It’s no secret that tournament winnings alone can not be relied upon. It’s projected that the players on Rise Nation have each earned roughly $16,000 in 6 months on Black Ops III, placing them 9-12th in total earnings by players worldwide. This puts them slightly above the average individual annual income in the United States, but the same can not be said for players several spots below them on the earnings list. For this reason, players need to learn other skills besides being the best at Call of Duty.

“It is very important that you connect with your fans daily on a personal level. Without them, you are nothing but another player!” Slacked said.

Growing a fan base and maintaining it is easier said than done.

“[Running the organization] is just very time consuming. Growing the brand is probably the biggest challenge because it takes time,” said team owner Kahreem Horsley. “I feel like the [Rise Nation] brand growth is picking up with the current success that we’re having. It’s encouraging to check some of the stats and see the growth compared to before, so understanding that it’s a process, I’m fine with the way things are going.”

Rise Nation is currently sitting at 36K Twitter followers and they actively promote their players. Call of Duty is the only game they are currently represented in, but that could change soon. “We are actively looking for teams in other games,” Horsley stated.

Rise Nation was founded by Horsley and his friend, professional football player Rodger Saffold, in 2014. Soon after, they were on the international stage. Loony happened to be on the original roster, along with Jonathan “Pacman” Tucker, Jamal “Whea7s” Lee, and Damod “FEARS” Abney when they placed seventh at the Call of Duty Championship. The big names and instant success immediately thrust Rise to the forefront of competitive Call of Duty, and they haven’t left since.

Horsley and Saffold are completely invested in their team. Long-time gamers themselves, the two are highly knowledgeable of the Call of Duty scene and attend major events to root their players on.

“Being an owner is just like being a manager,” Saffold explained to Call of Duty in a YouTube video. “You have to be able to handle all the day-to-day operations, and when it comes to the players you have to be able to manage people. The 1-on-1 level I have with some of my players is really deep.”

In their opinion, Rise is in a better position than anyone to take down OpTic, and they are quick to acknowledge that it has already been done.

“We’ve [beat OpTic], and our games are always close,” Horsley said. “It’s just whichever team clutches up at that moment because they’re so evenly matched.”

The two teams are nearly neck and neck, so if Rise can defeat OpTic on a more consistent basis, the No. 1 spot is theirs.

“It’s a hot discussion whenever they play, I feel with a win against them on LAN we will be seen as the #1 team,” Horsley continued.

The future holds plenty of opportunities for Rise to improve their position. The next event they are preparing for is MLG Anaheim, a historically important event on the Call of Duty circuit. All of the North American CWL teams will be in attendance and they will be joined by several international squads eager to carve their piece of the prize pool. Rise will already have a rankings advantage heading in, but Anaheim will likely be the most competitive tournament so far this year. And to top the year off, the 2016 Call of Duty Championship will be held in the fall, and that is where true legends are made.

Josh Billy is an editor at GAMURS. He previously owned eSports Guru. You can contact him at [email protected] or on Twitter @Orbit_CH3MISTRY.