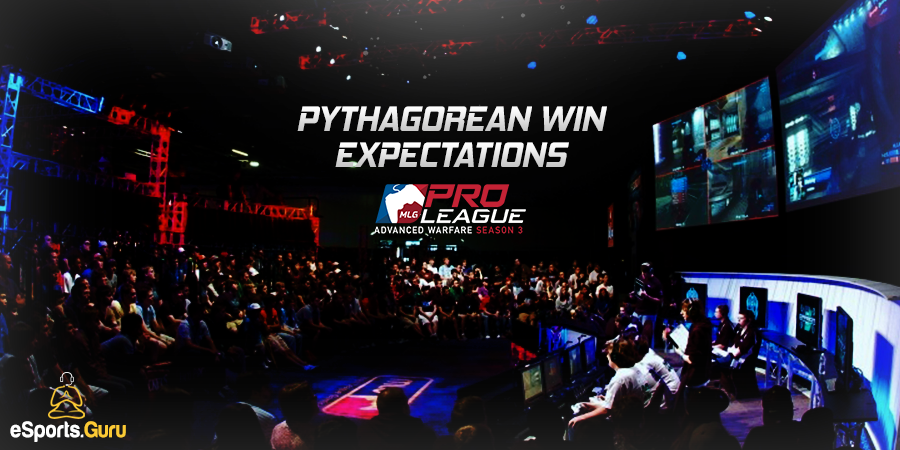 MLG Season 3 has been put on hiatus, suspended for an undetermined amount of time. The results of Season 3 up to this point are dismissed and the season is being replaced by an abbreviated round robin. Each team will play 11 games; one against each team in the league. This will preface a playoff LAN tournament with seeding decided by the online tournament. By using a modified pythagorean win expectation equation, the game mode scores of each team can be used to predict their expected wins in this new season. These expectations are, in essence, averages. Teams will surely win more or less games, but these expectations provide an interesting way to predict the coming season.

The Pythagorean Win Expectation Theorem works by leveraging the in game scores and a predetermined exponent to produce a predicted average winning percentage. The formula does not look at actual win rate but simply at in game score. This allows us to identify teams that may have a high ranking due to close wins. Thus, the pythagorean win expectations removes a portion of luck from teams. Teams that win by large margins -or lose by large margins- will be fairly compensated in this model.

The exponents in use for this particular model are four for Hardpoint, three for Uplink, and three for Search and Destroy. I ran the equation for each particular game mode and derived three different win percentages for each game mode. I counted Hardpoint and Search twice, while counting Uplink once. This may prove to be a mistake, however, due to the best of five format of Call of Duty. I will return to this data after the season and adjust the exponents accordingly for further seasons and may change the averaging system to compensate for error. These particular exponents are derived from Season 2 data.

The results of this equation are promising by the eye test. The most impressive teams; FaZe, Denial, Optic, and EnvyUs gobble up the top three seeds with ease. This is expected and is justified by the teams’ LAN and online performances to date. EnvyUs’s ranking at fourth proves promising for a recently unlucky team. The data shows EnvyUs to be an elite Uplink team, a fact they may lean on this season. Epsilon, Orbit, Rise, and Iso round out the bottom third of the league, with TCM, Optic Nation, TK, and Elevate making up the middle third. Epsilon comes in at last, despite an impressive win percentage in Hardpoint. Epsilon performs very poorly in Uplink; they are predicted to win just 10 percent of their Uplink contests. They are predicted to win just 25 percent of their Search and Destroy maps. For a team that has looked very impressive on LAN, Epsilon has a lot to work on. This team must improve in Search and Uplink to improve their seed. Nation has a few close wins, leading to their drop in this model. These win totals may not be accurate, good teams may win more and bad teams may win less, but they provide an interesting lenses with which to view this new season. At the very least, the rankings of teams fairly represent their in game performances in Season 3 thus far.