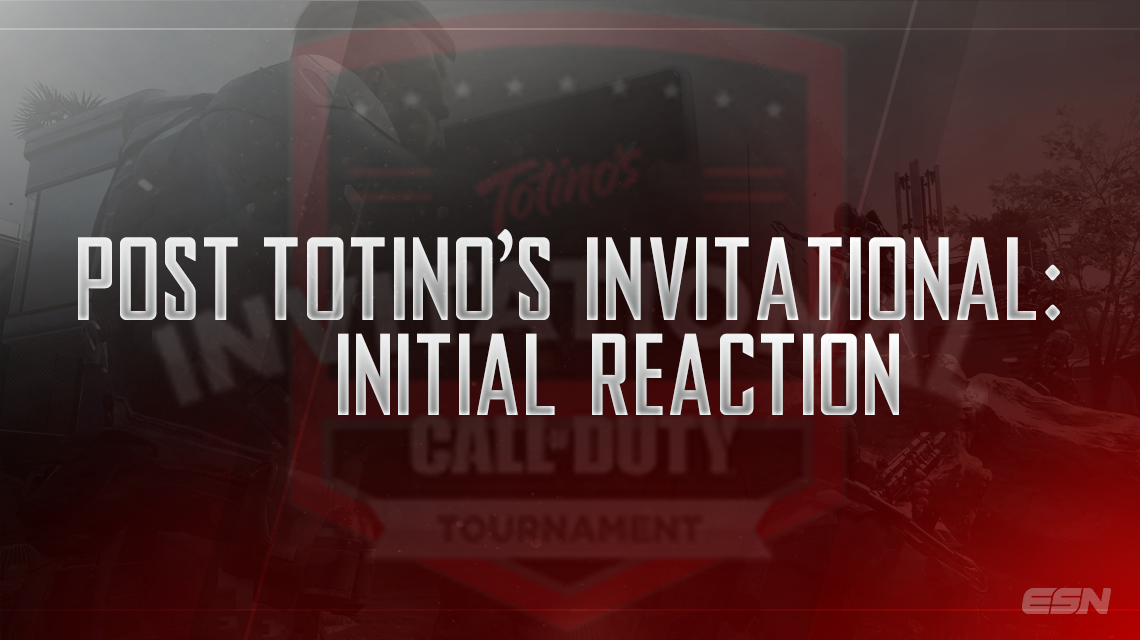 The first LAN event for Call of Duty®: Black Ops III has come and gone with the conclusion of the Totino’s Invitational held at the MLG Arena in Columbus, Ohio on Saturday, Nov. 14. A lot of exciting gameplay took place leading to an exhilarating grand-finals that saw Rise Nation take down OpTic Gaming in a Game Five Search and Destroy that went the distance.

But, there was a lot that happened during the event leading up to the grand finals, so we’ll return to that subject later on. If you missed this event and want to catch up on the action, check out our event preview and event recap articles.

After a full year of watching Call of Duty®: Advanced Warfare , it was definitely refreshing to see a more traditional Call of Duty game being played. Also, most of the players expressed the same pleasure after getting their first taste of Black Ops III on LAN.

However, just like with every Call of Duty game, the positives of the game are always analyzed based on the impact of the negatives. This article will serve as an examination of the event, as well as a means to relay our staff’s initial reactions to how this new game played and looked on LAN.

The first match of the event saw Team EnVyUs go up against compLexity Gaming , and this was arguably the most controversial match of the entire event. The first two maps of the series, a Hardpoint on Breach and an Uplink on Evac, were very close and fun to watch. With coL taking map one and EnVy tying up the series with a win on map two, the series headed to a decisive game three of Search and Destroy on Metro.

With the game tied at three rounds apiece, the game was stopped due to an in-game issue. While the players asked to just completely restart the map, Twitch denied this request and continued play from 3-3.

What made matters even worse was after the first reset, EnVy was able to win the following round. However, the round reportedly did not count because the casters were not in the game. So, the map was then reset again, and coL went on to win three straight rounds to win the series.

Despite the final outcome, this series brought up a lot of questions for the future of this game from a competitive standpoint. Most importantly, fans and players are wondering about a way for specialist abilities and scorestreaks to be carried over to the new map after a reset.

For example, let’s just say that one player on coL had a Lightning Strike and one player on EnVy had an Annihilator pistol specialist weapon when the game was tied at 3-3. After the technical difficulty that caused the map to be restarted, both of these players lost their scorestreak or specialist.

This is a problem that is creating some questions about the ability to reset a map, especially in Search and Destroy. With a big emphasis being put on these scorestreaks and specialists, it is hard to see players lose them if they perform well enough to earn them throughout the match.

It would probably be very difficult to implement some way for players to keep their scorestreaks or specialist abilities after a reset, but if Treyarch was able to figure this out, then they will have solved what seems to be the biggest concern with this game on LAN to date.

However, to be fair, other than this one issue during one map of the first series of the event, there really weren’t any other major concerns throughout the day. To be extremely picky, there might have been a few very small issues with the PlayStation 4 system here and there, and the Capture the Flag gameplay was very slow-paced and by far the most boring game mode to watch, but regardless, there really weren’t too many problems at this event. Although this is a small sample size, it seems like Black Ops III is on the right path to being a successful game.

Having already discussed the few negatives from this event, it is time to look at all the positives. Aside from the third map of the first series, there really weren’t any major issues to speak of, which is definitely a positive, especially if you compare it to the full year of issues on LAN with Advanced Warfare.

The first aspect of this event that I saw as a definite positive was that all of the players attending this event got together and decided on a “gentleman’s agreement” of guns, perks, and equipment that would be allowed to be used at this event. It was great to see the players come together to try and create the most balanced version of the game, that would also serve as the most exciting version of the game to play and for fans to watch.

The bans and protect system truly brought another strategic element to the game, something that hasn’t really been a part of previous Call of Duty games. For example, during the grand finals, OpTic was purposely banning the Pharo because they knew that Daniel “ Loony ” Loza had been playing well with that submachine gun. To counter, Rise was purposely banning the M8A7 because they knew that all of OpTic was playing well with that gun, and that their own players would be able to effectively use another assault rifle.

As a fan, this was exciting to watch because it forces players to be more versatile and makes them need to be proficient with all of the weapons available in the game.

In terms of actual gameplay, the specialist weapons and abilities definitely brought a whole new element to the game, especially in Search and Destroy, as seen in Round 11 of Game Five of the grand finals when Josiah “ Slacked ” Berry was able to pick up the first two kills of the round with his Annihilator pistol.

For this reason, among others, Search and Destroy was probably everyone’s favorite game mode to watch this weekend. There were also several very close and entertaining Hardpoint matches throughout the day, most notably when Team Kaliber was able to defeat Rise Nation 250-249 on Fringe Hardpoint .

Finally, I think one of the other most important positives to take away from this weekend was that another organization was able to win their first championship. Rise has come so close to winning a championship multiple times in the past, so it was great to see somewhat of an underdog team win the event. It’s always great to see other organizations win, especially after the entire Advanced Warfare season was dominated by OpTic and FaZe Clan .

Thus, overall it seemed pretty clear to me that the good definitely outweighed the bad at this event. It is also important to keep in mind that this tournament was played exactly eight days after the game was released to the public. So, there is a lot of potential for this game if Treyarch is able to fix the few minor mistakes seen this weekend. Nonetheless, all of the positives at this event clearly showed that we can look forward to an exciting year full of great Call of Duty action.

What are your initial reactions after watching the first LAN event of Call of Duty®: Black Ops III ? Let us know by commenting below or tweeting us @eSportsNation .