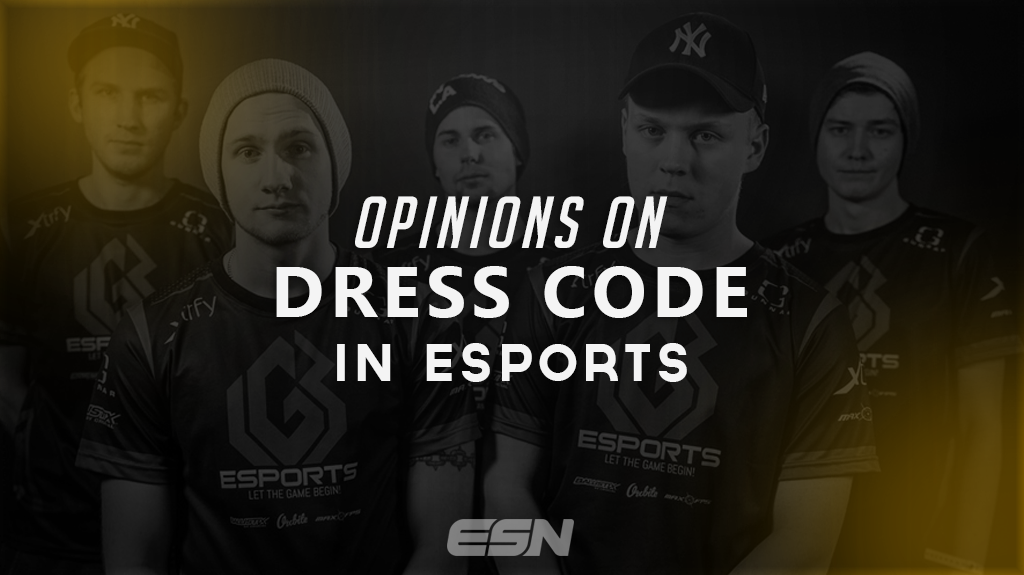 With competitive gaming progressing to become a traditional sport, there are many formalities that need to be taken into consideration; one of these formalities include a proper dress code. Many professional gamers from different eSport genres have voiced their opinions on the situation at hand, but I think it’s time to show you eSportsNation’s thoughts on the issue.

The Multiplayer Online Battle Arena title, League of Legends , continues to lead the way when it comes to any sort of apparel restriction, with developer Riot Games enforcing strict regulations on players and coaching staff for the LCS World Championship in October. With LoL eSports continuing to find interest within the mainstream world, it seems inevitable that they are attempting to take the necessary steps to become more like a traditional sport.

All of the players must be clothed in “matching apparel including shirts/jerseys, jackets, and pants,” as mentioned within section 4.4 of the 2015 World Championship rules . Team coaches are also required to “wear appropriate and professional attire,” which doesn’t include “team branded apparel.” This may seem reasonable to some, yet many eSports enthusiasts argue that athletic sweatpants, shorts and non-team apparel should be allowed for comfort.

Most gaming takes place at one’s home or at a team house. As a result, people believe that competitors should be allowed to wear what they want, in order to play more comfortably. Being able to relax like you’re alone at home plays a huge role to an athlete or professional gamer’s consciousness; whether they’re practicing at a small major event in front of hundreds, or in front of thousands at a world championship. Let’s not forget that even more people view these gamers from live broadcasts. For the most part, professional teams sport their team jerseys, which is how it should be in my opinion. On the other hand, their bottom-attire and footwear tend to be more sporadic in contrast to their tops.

One may ask, “what defines a professional athlete or competitor?” To answer this, many variables are at play such as: their attitude on and off the “field,” how they present themselves on social media and/or to the public, and how they dress at major events.

In most traditional sports, players are required to wear team branded apparel or suits during press conferences before and after their games. And obviously while they’re competing, they wear team uniforms. This isn’t always the case within the eSports realm. Players tend to wear all assortments of apparel from pajamas, to flip flops, snapbacks and athletic shorts.

In their defense, comfortability is an important component when it comes to competitive gaming. Players are sitting in their chairs and looking into their monitors for long periods of time. Then again, professional athletes have become accustomed to wearing their sponsored gear in-game, without public complaint. The best of the best are expected to consistently outperform against the rest no matter what conditions.

Specifically within the Call of Duty community, many argue on how this is very unbecoming, hurting the competitive scene by sending the wrong message:

In comparison to League of Legends, we obviously see a lack of apparel significance in other competitive titles such as Call of Duty , Counter-Strike,  Halo and more. It’s usually advocated by either the player’s organization or tournament host, that competing players and coaches (if any), are to sport their sponsored team apparel or at least have the common sense to dress decently and professionally in public.

There’s a reason why we only saw Dota 2’s The International 2015 and Blizzard Entertainment’s Heroes of the Storm events on ESPN. They’re important, unique and professional major events of competition. All the players and coaches during those events wore appropriate clothing for national television. But note, every event isn’t a major, international championship or an ESPN broadcasted eSport. Rules obviously fluctuate depending on the tournament host or importance of the event.

As weird of an issue as this may be, a dress code creates one of those arguments that can change the future of eSports in its entirety. Popular companies like Nike , Red Bull , Monster Energy , HTC Corporation , and more, have shown public interest to a limited amount of professional teams, and would surely enjoy seeing their brand rather than seeing casual, unprofessional attire. Sports broadcasters ESPN and Fox Sports , have also been occasionally involved within eSports, making a dress code an even more important topic of discussion these days.

The main dress code controversy that stands: are you on the side of professionalism , comfortability , or a little bit of both ? Here’s some of the thoughts from 12 various staff members within eSportsNation:

I can see why many are against the concept of a dress code; however, with that being said, I do think that it’s a good idea since it would create a sense of professionalism and legitimacy, especially to outside observers. Now, I wouldn’t want to force the players to shown up in tuxedos since that would be extremely cumbersome, but I think the dress code outlined for the LCS 2015 World Championship should be a standard across all of eSports.

With Black Ops III coming around the corner, I expect CoD eSports to grow a lot. With the large boom in eSports this past year, we need to present ourselves at the same level as League of Legends and Dota 2 professionals do during their events. I hope pajamas and flipflops are a thing in the past for CoD eSports.

A Little Bit of Both – Dan Cubby (Social Media)

If you’re streaming at home in the comfortability of your room, wear whatever the hell you want. But if you are representing an organization, and its sponsors in public, you should present yourself in a way that does not involve sweatpants, pajamas or athletic shorts. It’s a matter of maturity and professionalism, and a dress code should be enforced.

I don’t really think a dress code in eSports is necessary unless it’s just saying that a player has to represent his or her team with either a jersey or team apparel. Shoes, pants and hair styles don’t have any effect on a player’s ability to play. So, there’s no need to implement a dress code on that. It’s fine how it currently is.

The eSports community needs professionalism built in to the system. In my opinion, players should have designated uniforms or a list of approved clothing items for different situation.

Players should be required to to wear business casual or at least a sports coat for press conferences which should be held before and after all events.

During events, wearing pants and a team top would be acceptable. However, I don’t personally like seeing players running around in pajamas and sandals during the event. It sends an amateurish look to the general public.

The opinion of traditional sports enthusiasts are often cautious when looking at the eSports realm as a possible sport. When those who are interested enough to give it a chance see the “professional athlete” in pajamas, they’ll turn away immediately. They will get the initial impression of an unprofessional community, which is in complete contrast to the image we should be portraying.

Unfortunately, it will be this initial impression that will not just prevent potential viewers from getting involved, but potential investors too, and then it really begins to affect the scale in which we can grow as a traditional sport. Dress code should not be overlooked and is key to ensuring the integrity is sustained for eSports.

A Little Bit of Both – Justin Binkowski (News Editor)

I believe that a strict dress code would not be beneficial to the eSports community. As a lifelong athlete, I have always found athletic clothes to be the most comfortable for me to wear. I think that is something important to keep in mind when considering a dress code in eSports; what is the most comfortable attire for each individual player. Owners and fans want to see players to do the best that they can, and dressing comfortably could correlate with a player’s ability to perform on LAN. While I agree that players should look professional, I don’t see anything wrong with athletic clothing in particular.

These regular events are not that formal within Call of Duty, excluding the big MLG tournaments. So in my opinion, there is literally no point. This isn’t Riot Games demanding how everything goes. CoD eSports is full of young competitors who don’t care what you dress like as long as you can play. If you want CoD to be more professional, you should sort out the immature action on Twitter first and how the professionals dress later.

I think that dress codes in eSports is an absolute necessity. People still view eSports lower in stature to traditional sports, and having competitors show up in sweats or t-shirts has not been helping that. The Call of Duty scene especially needs to look more mature to provide more credibility.

If you want eSports to become a globally recognized sport, you can’t come to an event looking like you just woke up and threw on some sweatpants. Clean yourself up, and represent your team in a casual and proper manner.

I believe that there should be a more strict dress code in eSports. As of now, you will sometimes see pro players playing in their pajamas, like Seth “Scumpii” Abner, and in my opinion that’s very unprofessional. If eSports is going to be considered an actual sport then there should be a strict dress code. When you watch sports such as baseball and soccer, you don’t see players playing in their pajamas, but you see them in proper team uniforms.

A Little Bit of Both – Roger Toor (Social Media)

In my opinion, a serious dress code shouldn’t be required just a minuscule one. Players shouldn’t be aloud to wear basketball shorts and pajamas/sweats. Everything else should be permitted though. The players should be comfortable but also presentable. In my opinion, any top is fine, even the tank tops Cloud9 and Doug “Censor” Martin usually wear.

As you can see, seven members within ESN side towards professionalism, while three members fall towards a little bit of both, and two hold fast with comfortability. Do you agree with their positions?

Do you believe that a professional and proper dress code should be enforced throughout all eSports titles? Let us know in the comments. Follow @eSportsNation for the latest news and content within the competitive gaming community.