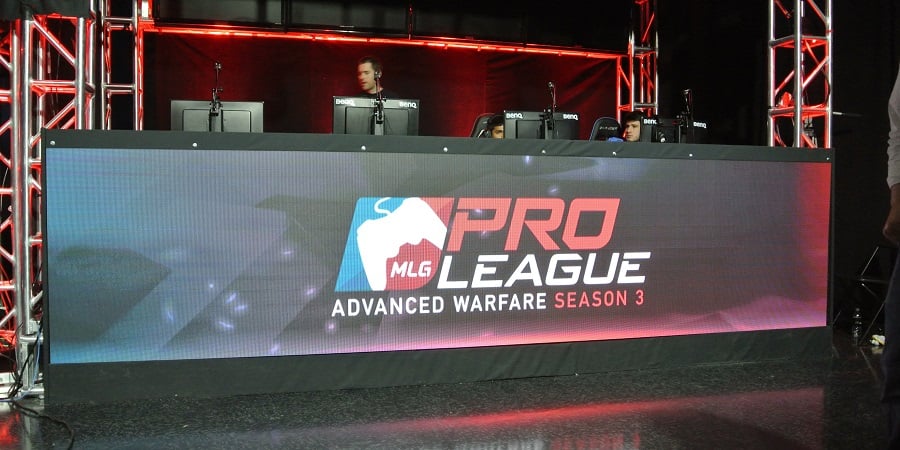 This past weekend, Major League Gaming held their Season 3 Relegation Tournament in which 16 teams were attempting to qualify for the Call of Duty Pro League. We wrote about the results of the tournament previously.

This was my third time at the MLG Arena in Columbus, Ohio. Luckily, I live in town because I am in graduate school at Ohio State University, so there are no travel costs to attend events there. The Arena here in Columbus is actually the only permanent venue that MLG owns, but hopefully there will be more in the future around the country.

The first time I drove to the venue was last October for their very first event: the Season 3 playoffs on Call of Duty Ghosts. I was actually with my girlfriend at the time and I dragged her in to check it out, paying the $10 entrance fee they were charging at the time. I was very close to just passing by the place, which is located in a business park near the airport. The only reason I found MLG Arena was because some of the staff were outside throwing a football around while wearing shirts with the MLG logo. The venue is not very large, but it serves its purpose.

Needless to say, it’s not exactly fan-friendly to a large extent. Being a small place, there are only between 50-100 chairs for the audience, which includes players and coaches not currently playing, to view the main stage. Depending on the arrangement, there are 3 side-stations and the main stage, which features a raised platform for the casters. Also in the venue is a pro lounge, located upstairs and only accessed by the players, a MLG Pro Shop, and a production room.

I arrived at the venue on Friday afternoon a little bit after the event started. A food truck was parked outside and as I walked past it, the guy working it was talking to a customer and said something along the lines of, “So these guys aren’t even the best ones huh? There are a bunch of better teams out there?” He was right about that, but I gave him a hard time about it. The Relegation Tournament was not open to the top 8 teams currently in the Pro League, but that didn’t mean the players in attendance were not top tier. In total, there were actually 3 former Call of Duty Champs playing: Aches, Killa, and MirxXx, all on different teams. I knew before it started that it was going to be a good weekend!

Due to my affiliation with Team Orbit, the 5th seeded team in the tournament, I was responsible for taking pictures of the team. I also got in for free! Their first match wasn’t until 9 pm on Friday, but one of the players was flying all the way from California and arrived in Columbus only an hour before the match. I had to make a quick trip to the airport to pick him up in time for him to warm up with the rest of the team. Luckily the airport is only 5 minutes away from MLG Arena!

Before Orbit went on main stage, I was at the side-station live-tweeting the matches happening there. Interestingly, I was only one of 2 people there taking up that task. The matches were not on stream, so MLG only announced the series winners afterward. I felt that I was serving the community by doing play-by-play updates, but unfortunately I was unable to stand at the station for every match of the weekend due to other obligations, including watching Orbit when they played on main stage.

The main stage matches are awesome! A lot of production went into making the stage look nice, with huge screens in front of the team booths that display the players faces and their team logo. Behind the players is a screen that shows their point of view in-game, so people in the audience can see all of the action at once. Above the booths is a large projector screen showing the MLG.tv stream, and the casters sit at a desk on a raised platform between the booths. Their voices are amplified and can be heard throughout the venue. Smoke machines are used for effect, as well as the classic blue and red lights MLG is fond of.

One thing that I found a bit funny is the amount of trash talking that occurs during matches. It wasn’t quite as prevalent this time around, compared to the NA CoD Champs qualifiers, but there were still some players who got loud and in the face of their opponents. It’s a bit easier to trash talk when sitting right across from the other team at the side-station, but on main stage the teams are sitting about 30 feet to the side of each other, facing the audience. Even so, many players were hyped up and yelled in response to big plays. At the side-station, there were several direct insults thrown out as well as the usual, “WHO WAS THAT?”, when a player makes a big play such as a turn-on. The obvious response is to remain silent…

Hype in-game is essential. When a team is doing well, the players are loud and encourage each other. When they start losing, they get quiet and try to focus, but sometimes the encouragement is gone. I’m also not really a fan of insults, but as long as they aren’t personal it’s ok. Even after the matches, the players show good sportsmanship and shake hands with the guys they were just yelling at in-game.

From my point of view, MLG put on a good show. I know I couldn’t watch the stream, but the main stage matches did not have huge breaks so there seemed to always be action. I thought it strange that they did not stream the side-station as well, or at least have an analyst watching those matches to report later, but that’s what made my live-tweeting more important. In the analyst room, Minks joined the regular casters. She was in the United States because E3 was a week prior, but I don’t personally think she has much experience talking about competitive Call of Duty. From what I saw, she didn’t have much to say at the analyst desk, so maybe MLG should refrain from using inexperienced personal next time. We all have to start somewhere though, right?

One thing the venue needs is more food! There were apparently snacks in the pro lounge and there was a food truck at times, but on Saturday and Sunday when I got hungry late in the afternoon, the food trucks were nowhere to be found. I would have had to drive to get some fast food, so I brought my own lunch.

Overall, I had a great time and the MLG Relegation Tournament was a success. It wasn’t crowded, so almost every interaction I had was with a big name in the competitive Call of Duty scene. I made small talk with pros and people like Sundance DiGionvanni, took a lot of pictures, and saw my team qualify for the league! More events will be held in Columbus in the coming months and I will surely be back Next on the list though is to attend the MLG World Championship in New Orleans!

Thanks for reading! Be sure to check back here at eSports Guru for more Call of Duty articles and experiences.