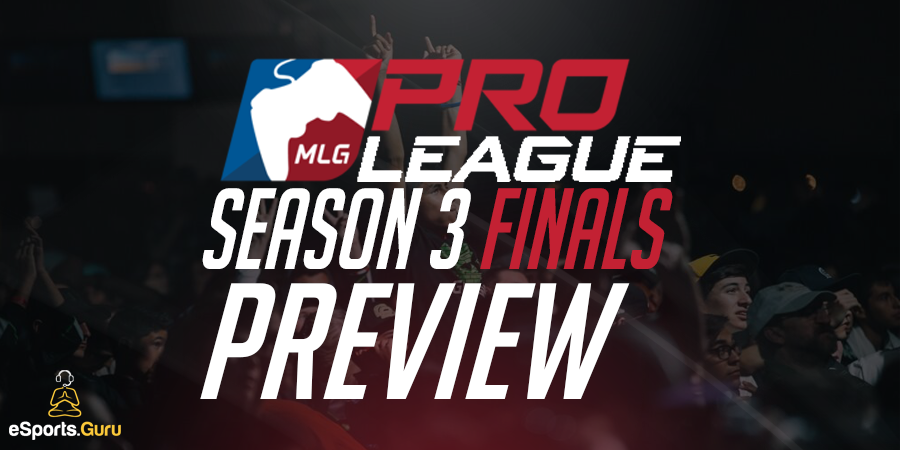 This season of the league has been marred by DDOSers. The online league was unable to continue because players were unable to connect to the internet long enough to complete matches. Not only was this frustrating for the players, but it was a nightmare for the fans watching at home.

Though the truth has not been told, many in the community blamed Vulcun, an eSports fantasy site, for the problems. On Vulcun, users can enter fantasy contests with real money. By altering the outcome of matches, it may be possible to secure a win in the fantasy contests.

MLG implemented damage control. Call of Duty fantasy was taken down from Vulcun and the stats from the Pro League were reset. All teams would play eachother once, resulting in 11 matches each. No matches would be live streamed, and it turned out that most matches were not even streamed at all. All teams would be invited to the season finals in Columbus, Ohio.

Post-reset, the standings in the Call of Duty Pro League were far from what was expected! Compared to the standings before, the post-reset standings looked as if a whole new set of teams were participating. Let’s take a quick look at each team.

For several years now, Optic Gaming has been the most popular organization within the competitive Call of Duty scene. This was largely in part to Nadeshot, who is no longer part of the team but is co-owner of the organization. Since CoD Champs, Optic Gaming has been the most consistent team in the game. They won every major tournament until UMG Dallas, where they lost to Faze. Most recently, they won UMG DC and remain the favored team to win Season 3. Will Optic Gaming become a three-time Pro League champion on Advanced Warfare?

This squad has risen through the ranks and has been quite dominant as of late. Post-reset, Elevate boasts a 9-2 record and has performed well in the last few LAN events. They won MES 25K in Detroit convincingly, only dropping one map. At UMG DC, an even larger event, Elevate placed 3rd. They are likely to remain a top team after the Season 3 Finals.

This squad contains an excess of top talent. Clayster and Attach won CoD Champs together while they were still under Denial eSports. They then left to join Faze with Enable and Zooma. Each of these players possesses top-tier gun skill as well as smarts, which is why they won both UMG Dallas and the Gfinity Summer Championship. Most recently, the team suffered at UMG DC. Will Faze be able to pull it together in the Season 3 Finals?

This is a team that has been very inconsistent. On LAN, they have placed quite poorly a majority of the time. After being relegated at the end of Season 2, Optic Nation managed to requalify for the second season in a row. Is this a team that cracks under pressure or are they a team that pulls it together when they need it the most? Some would say both.  Ending the MLG Pro League with a 6-5 record, Optic Nation will receive a bye in the first round of the Season 3 Finals.

Season 3 was the first time Isolation has been in the MLG Pro League. Instantly, they were able to compete at the top tier with teams that had a lot more experience. Ending the Season at 6-5, Isolation Empire faces fellow newcomers, Team Orbit, in the first round of the finals.

Another veteran organization in the competitive Call of Duty scene, Team Envy has been near the top of the rankings for a while now, but they have not quite broken into the top 3 teams. Can this team play to perfection at the Season 3 Finals?

Epsilon is a well-known Call of Duty organization originally from Europe. Most recently, they dropped their European team and now only field a North American Call of Duty team, besides the teams they own in other eSports. The team qualified via the Relegation Tournament. Since then, Swanny left the NA team and Parasite joined. Post-reset, Epsilon has improved their record immensely and face Team Envy in the first round.

At the start of the season, Rise was found at the bottom of the rankings. They then brought on Apathy from Elevate and Burnsoff from Orbit, which seemed to improve their game. Rise made it as far as the finals at MES Detroit and finished 4-7 in the league. They are not a top team but do pose a threat to Team Kaliber in their first round match. If they win, they will go on to face Optic Gaming.

The trio of Sharp, Neslo, and Theory has teamed on-and-off for several years now. Though they have not been at the top of the rankings anytime recently, Team Kaliber has remained somewhere in the middle of the pack in the Pro League. With a large fanbase they hope to appease, Team Kaliber will need to put all of their experience to good use this weekend.

Whoa, what are they doing all the way down here? Pre-reset, Denial was a top-3 team! What happened while we weren’t watching?

The only player remaining from the CoD Champs roster is Replays, but with the addition of the other three players, Denial has remained a strong contender. Most recently, they placed second at UMG DC. Expect them to place well this weekend.

Originally a European powerhouse, TCM moved their team over to the United States in Season 2. Since then, they have replaced three of the European players on their roster with Americans but have not found much success. Even with the reunion of Aches and TeePee, TCM finished the season post-reset with a 3-8 record.

Team Orbit’s record post-reset is abysmal. The likelihood of any team finishing with a 1-10 record is very low, but Team Orbit was unable to pull off more than one win online. Will they be able to redeem themselves on LAN?

Thanks for reading, please comment below! We here at eSports Guru strive to bring you up-to-date and interesting articles focused on your favorite games. Please come back again!