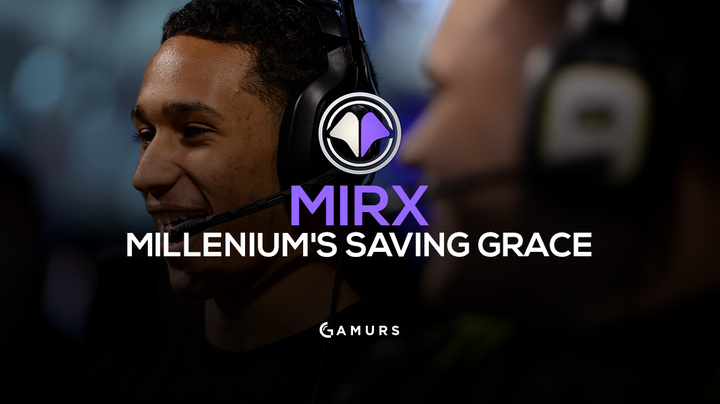 However, due to circumstances kept under wraps by Millenium, Swanny did not attend the event. Coming to fill the gap is former-world champion,  Marcus “MiRx”Carter.

“They just kinda called me up and asked me to fill for Swanny,” said MiRx before his match against eUnited. “It came out of nowhere, but I’m happy to be here.”

The team got very little practice together before their first match of Group Play against Splyce. Millenium got off to a hot start, taking the Hardpoint, 250-185. The series slowly fell apart for Millenium, who fell 4-6 in Search and Destroy, 6-10 in Uplink and a tough loss in Overtime.

Later that day, MiRx and co. were in the face of going home if they lost to eUnited. Millenium took the series 3-1 off-stream. After ending Day 1 with a solid 1-1 record, Millenium came into Day 2 prepared to push into Bracket Play.

In their first match of the day and final match of Pool Play, Millenium took down Black Forest Games 3-0 (250-28 Hardpoint, 6-5 Search and Destroy and 10-5 Uplink). With a Pool Play record of 2-1, Millenium is going to advance further than most projected after the news of Swanny not attending appeared. However, MiRx is not phased or afraid of what lies ahead.

“When it comes to placing, I’m not really thinking about that,” said MiRx after his match against Black Forest. “We’re gonna go out and try to make something happen.”

Given the spontaneity of MiRx’s competing with Millenium, MiRx is pleased with the team’s play.

“The chemistry and communication of the team right off the rip is fantastic,” said MiRx. “The way we’re playing right now is great and the difference in playstyle is working out for us.”

When asked about how it feels to be playing against the people he won COD XP with (Damon “Karma” Barlow of OpTic Gaming, Chris “Parasite” Duarte of compLexity Gaming and Adam “KiLLA” Sloss of Renegades, who has since been eliminated from COD XP), he smiles and embraces the opportunity.

“It’s great to see the guys still competing,” said MiRx. “Karma and OpTic have consistently placed well, so it’ll be interesting if we get to play.”

MiRx won COD XP with Fariko Impact during the Black Ops 2 (2013) generation. During that time, he was known as a player who did not shy away from letting his thought be known. From trash talking to voicing opinions, MiRx was often polarizing to fans.

“I think I matured a lot since then thanks to the experiences I’ve had travelling – meeting different people and getting different perspectives on life,” said MiRx. “The support from my fans has played a huge part also, but I don’t regret [the way I was} – I’m glad to have been part of that scene and I’m glad to be where and how I am now.”

Since then, he has matured exponentially and credits it to his fans and the experiences he has had over the years. His growth in maturity is likely a key point as to why he has been able to adapt and work well with Millenium’s EU squad.

MiRx has been Millenium’s saving grace and after speaking with him, it’s easy to tell that he’s prepared to make sure that he is seen as more than just “Millenium’s Band-Aid.”

What are your thoughts on MiRx coming in for Millenium? Did you expect for them to make it out of the Pool Play? Let us know by commenting below or tweeting us @GAMURScom.