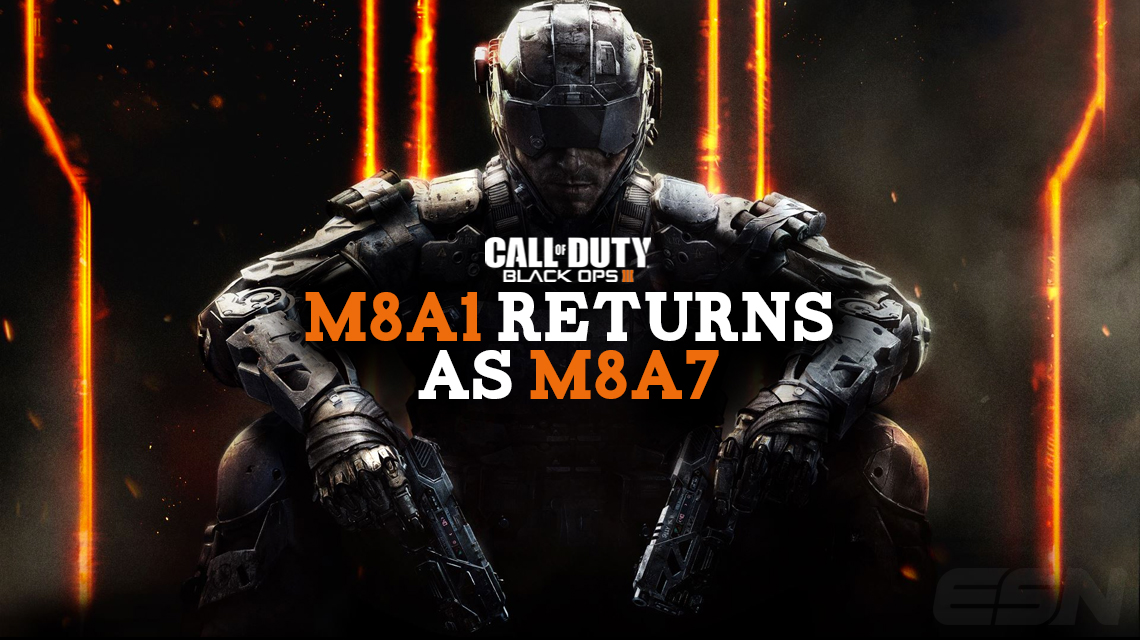 The most popular AR among professional players and amateurs alike during Black Ops II, the M8A1 is back and appears to be almost the same gun, except for one thing: the name. Instead of being called the M8A1, our new toy will be called the M8A7. Other than that, the gun appears to be quite similar so far based on the CoD eSports reveal at gamescom 2015, which we covered here.

In a poll that we put on Twitter asking whether the BO2 M8A1 was better than the Call of Duty®: Advanced Warfare BAL-27, there was a resounding consensus from our followers. Most said that the M8A1 was the better weapon, and that it wasn’t even a competition.

Why is the M8A1 thought of as one of the best weapons of all time in CoD?

There are a few reasons for this, and I’ll break them down for you right now.

The four-round burst and kill range

The four-round burst of the M8A1 might be its trademark, and it’s a huge reason the M8A1 was so dominant in BO2. With a firing rate of 1,250 rounds per minute (RPM) during the four-round burst, and a four-shot kill range of about 30 meters, this weapon was nearly impossible to escape. Put it into the hands of a top AR player like James “Clayster” Eubanks, and their team will dominate practically the entire cycle of the game.

Every CoD title has a dominant gun for each category. There is always one AR that’s better than the others, one sniper that’s better than the others, etc. In BO2, the M8A1 was not the dominant AR. Well, not in the beginning. The FAL OSW was actually the preferred AR for many people when BO2 came out, but it was quickly banned from the competitive scene after it was actually deemed to be too strong. Enter, the M8A1. The most balanced AR in the game, the M8A1 was the obvious next choice. No one on the scene wanted a gun that was too strong, because that would simply make the game boring for everyone. The M8A1 was so popular for one simple reason: it was strong, but not too strong.

VS automatic rifles from other CoD titles

Compare it to the dominant AR of other CoD titles, such as the BAL from Advanced Warfare or the Remington R5 from Call of Duty®: Ghosts, and the reason the M8A1 is so loved is obvious. In Advanced Warfare, the BAL is not the only dominant AR. The Integrated Munitions Rifle, rather known as IMR, which is actually quite similar to the M8A1, is also in play. With the constant competition between the two guns, and the complaining from players and fans alike, neither one is getting much love. In Ghosts, running an AR in the anchor role that they were all so used to, simply wasn’t viable anymore. Ghosts only had a map or two where playing the anchor role was possible, and it was a game dominated by submachine guns. A game dominated by submachine guns leaves no place for an AR fight, no matter how talented the players may be. So what do you guys think? Are you happy about the M8A7, or is there a different AR from a previous game that you want to be remade? Let us know in the comments below, or on our Twitter @eSportsNation.