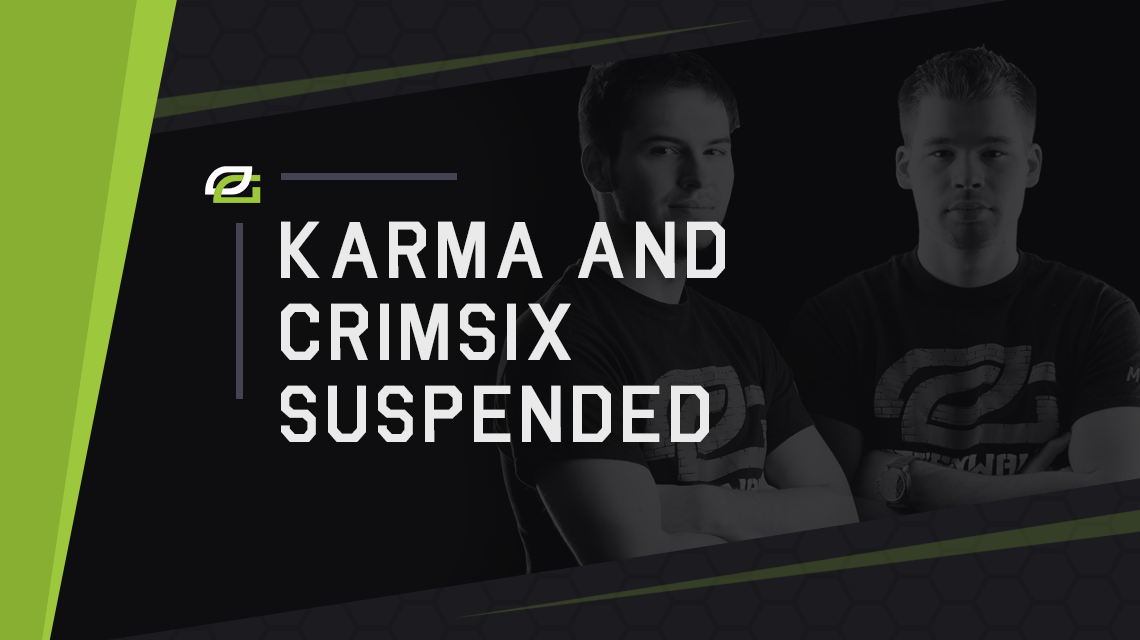 Yesterday, two players on OpTic Gaming’s top-ranked Call of Duty team announced on Twitter that they have been suspended from playing their next Call of Duty World League match.

Both Damon “Karma” Barlow and Ian “Crimsix” Porter received suspensions as disciplinary actions from the Call of Duty World League, forcing OpTic Gaming to forfeit their next match. The specific reason for the suspension was not revealed but likely stems from previous comments Karma made about the league on social media and streams. However, in a recent stream clip posted to Reddit, Karma is heard saying, “We were literally so nice. We’re like, ‘Yea, we’ll upload all four of our POVs of us lagging…what do we [have] to do?’ [The admin replied], ‘Upon review, we’re not replaying the map.’ So I felt… ‘Fuck off’ was a great reply.”  Crimsix spoke about his suspension here.

Forfeits have become the norm in the current iteration of the Call of Duty World League. Of the 20 matches they have played in Stage 2, OpTic have been on the losing end of two forfeits and the winning end of one. Almost all other teams in the North American CWL have also been involved in matches ending in forfeits, begging the question, “Why?”

Of the many rules and regulations listed in theCall of Duty World League Pro Division Handbook, players are expected to be sportsmanlike, hold up competitive integrity, and act professional. Teams are expected to show up to their scheduled matches on time and can be forfeited for not doing so. Matches can be moved if the CWL is given ample notice and they determine the reason is acceptable. However, matches have been forfeited even when players experienced unforeseen difficulties, such as when Renato “Saints” Forza on Luminosity had a power outage during their match versus eLevate. He apparently rushed to a nearby hotel with his gaming setup but was too late. Instead of rescheduling matches like this, the CWL has many times chosen to award forfeits instead. On the other hand, 100 Thieves have seemingly been skirting the rules, giving up mid-match many times, but have seen no consequences (besides losing).

These decisions, made multiple times now by the CWL, have created a rift between admins and the players as well as fans. Many pro players have taken to social media to express their frustration with the way issues are handled in the league and fans have backed them up. Decisions made by CWL admins have largely been behind the scenes, mostly being communicated between the players and themselves so the public does not see the entire process. This has led to calls for more transparency and consistency in decision making.

Soon after the news that Karma and Crimsix were suspended came out, a Reddit post by an Activision representative stated that the final week schedule had been changed to “guarantee these important matches are played out in the most exciting environment.” At the time of this publication, the CWL site still shows the original match schedule. Of the several rearranged matches on the schedule, those involving OpTic Gaming stand out the most.

In the original schedule, OpTic Gaming were supposed to face Dream Team, who are still in the playoff race with several other teams. Due to the suspensions, this match would have been an automatic forfeit in Dream Team’s favor. OpTic’s next and final match of the Stage was set to be against 100 Thieves, who have already been mathematically eliminated from playoff contention. In the revised schedule, OpTic’s remaining matches have been flip-flopped. Now, they face 100 Thieves first and Dream Team second, meaning 100 Thieves will be awarded a free win and Dream Team will have to face OpTic at full strength. Needless to say, the decision did not bode well with Dream Team or fans.

Adam “Killa” Sloss has taken to Twitter to tell us how he feels. “I get that life isn’t fair but this [isn’t] acceptable….tired of being treated unfairly,” he said.

Calls of corruption quickly dominated the post. But according to CWL caster Clint “Maven” Evans, the schedule change is a coincidence rather than an intentional spit in the face of Dream Team.

“We have had flex scheduling the entire stage around the match of the week. Trying to highlight the best matches. You may not have noticed but the schedule has changed consistently. The schedule change has been discussed internally for weeks. Nothing to do with suspensions. It’s been so tight for top 8/seeds that we wanted to do an NFL Redzone type broadcast with all matches at [the] same time for the [four] that had most impact. I think this will make for an incredibly exciting final Thursday,” Maven stated.

The simulcast set for Thursday will feature OpTic vs. Dream Team, Cloud9 vs. Luminosity, H2k vs. EnVy, and Rise vs. eLevate. All of these matches will determine whether teams make it to the playoffs or not as well as seeds. Simulcasts such as this have not been done before in the Call of Duty World League, though two streams were used in Stage 1.

It is likely that the simulcast is being implemented due to issues that arose in the European CWL. On the last day of scheduled matches in the EU league, teams were still fighting for seeding and the last match came down to Splyce vs. Millenium. Splyce had already locked themselves into third place heading into the playoffs but Millenium would have finished in sixth place with a loss. Millenium had won the Stage 1 playoffs and have been regarded as a top European team even after internal difficulties this season. If Splyce defeated Millenium in their match, they would ultimately set up a rematch at the Stage 2 playoffs. A loss, however, would set Splyce up against Supremacy, a French team with less experience. Splyce lost the match 3-0 and it was clear they were never trying to win.

The Call of Duty World League has no reason to ruin the experience for players and fans. It’s in their best interest to keep everyone happy, but some of the decisions admins have made in this first year of the league have been questionable. Similar to Riot and League of Legends, fans are asking for transparency and consistency in decision making. If fines/suspensions are being handed out, they must make sense and be fair. It’s clear that the CWL is trying to correct some of their past mistakes by creating a simulcast at the end of the season for the NA league for reasons stated above, but the timing which this announcement came could not have been worse. On top of all this, other issues like an agreeable ruleset have plagued the league this year. To fix it all, admins of the Call of Duty World League will have to listen more closely to players to improve relations and get back to the competitive Call of Duty we all enjoy.

Josh Billy is a long time of Duty fan. Contact him via email at [email protected] or on Twitter @Orbit_CH3MISTRY.