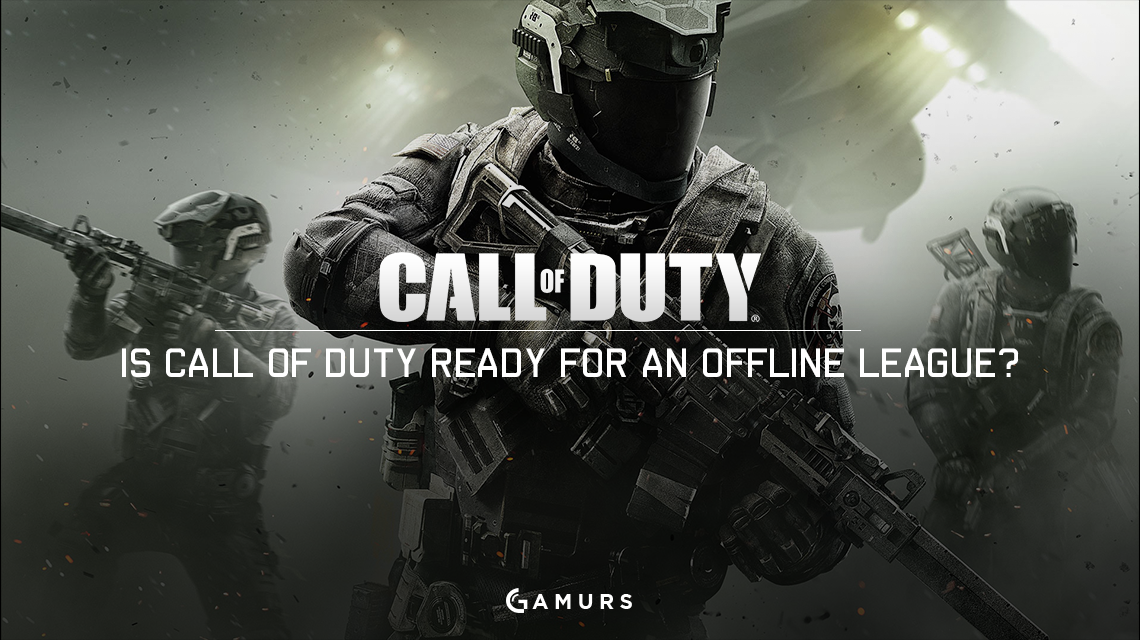 Just last year, Activision became heavily involved with their Call of Duty franchise by taking control of the competitive scene and hosting the first edition of the Call of Duty World League (CWL). Now, ESPN reports that Activision may be willing to take it one step further and turn the CWL into an offline league.

Ahead of their “Esports Reveal” for Infinite Warfare last week, Activision and CWL administrators met with team owners to discuss the future of the league. According to ESPN, the discussion veered toward the possibility of it being offline beginning in the spring of next year. Competition leading up to the start of the new proposed CWL would consist of multiple LAN events that would aid in determining which teams would be placed in the league.

Also proposed in the meeting was a “Global Super Bowl,” an offline league which would take place at the MLG Arena in Columbus, Ohio and be attended by teams from around the world. Activision would cover all travel and housing expenses for players participating. Although details were not mentioned, the Global Super Bowl could possibly operate similarly to ELEAGUE, a tournament-style league for Counter-Strike and Overwatch broadcasted by Turner.

While this discussion did take place, it is important to remember that so far, all of these changes are simply proposals and not definite. However, it is interesting to think about what an offline Call of Duty World League would be like.

Since they began, online competitions have been plagued by a variety of issues. One highly important factor is connection, or more specifically, ping. A player’s ping is measured in milliseconds and is the reaction time of their connection. In other words, ping is used to describe how fast a response is received after sending out a request. Theoretically, the fastest response possible is at the speed of light, but in the real world, this is never the case. Response times are always slower than the speed of light, and ping is affected by distance, such that response times are slower with increasing distance.

This is one reason why online competitions rarely pit players from different continents against each other: the ping is just too high. For the same reason, west coast players and east coast players in North America often dislike playing against each other. Ultimately, ping is the major factor affecting online competition as it happens because players are often scattered across the country (or even across multiple countries), but other issues exist.

As we saw at the end of Advanced Warfare, online league matches are subject to outside influence. People with no better way to spend their time took it upon themselves to sabotage the last season of the MLG Pro League with DDOS attacks. Players were hit offline consistently, preventing them from completing matches in a fair manner. This forced MLG to reset the season and play it out in private; matches were recorded and streamed at a later time. Though better precautions were taken in future competitions, players were still occasionally knocked offline mid-match.

Sometimes, DDOS attacks aren’t even the culprits. Weather-related outages and other fluky situations occur periodically, having great effects on online competitions. All of these issues can be avoided by playing matches offline.

However, even LAN events have their own problems, but in an offline league, most of those can be worked out far ahead of time. There is one thing that can’t be avoided though, and that’s unexpected PlayStation Network downtime.

PlayStation 4’s need to be connected to the internet even for offline competitions. Most of the time, this is not a problem, but at the 2016 Call of Duty World League Championship, a PlayStation Network outage caused a lull in the action that lasted several hours. In other instances, casters’ consoles at events received unwanted messages mid-competition.

In the past few years, hacker groups have targeted gaming platforms like the Playstation Network. In 2014, Playstation and Xbox services were down during the Christmas holiday, a prime time of year for players. In fact, Playstation Network is subject to daily DDoS attacks, though only some are successful. If the Call of Duty World League is played on LAN, extra precautions must be taken. Hackers may even target the Playstation Network for the sole purpose of sabotaging the CWL, however, this obviously occurs during online play as well.

How it Affects the Players

Right now, the only esport whose professional matches are played exclusively offline is League of Legends. Riot-sanctioned leagues exist in nearly every region around the world. In North America, the teams live and play in Los Angeles, California.

An offline Call of Duty World League would mean players have to move away from home, away from their families, and all live in the same city. For the North American pros, that city would be Columbus, Ohio where the MLG Arena is located. It’s not clear who will be operating the European or APAC regions of the league this year, but last year ESL operated out of Cologne, Germany and Sydney, Australia. Due to the fact that each of these regions encompasses multiple countries, visa issues would be a likely problem.

Just last year, Jevon “Goonjar” Gooljar-Lim of Team Kaliber was unable to fly from Canada to the United States for the Stage One Relegation Tournament. Authorities believed he was traveling to the US for work, which in reality was pretty spot on. At the time, Goonjar did not have a P1 Athletic Visa but was later awarded one, making him one of the first esports players to do so and be recognized as an athlete.

In a separate situation, American player Eric “TwiZz” Servello left the country to move to France and join Team Vitality. At the time, France was in the midst of deciding whether they wanted to recognize esports players as athletes. TwiZz intended to play with Vitality in the Call of Duty World League, but was never able to do so and moved back home at the end of the season.

Should the Call of Duty World League be played offline this year, work must be done to avoid these types of issues. Several professional players were quick to recognize how this might affect their career.

“[W]hat’s gonna happen to the pro players that get declined VISA’s? Just left out when they’ve devoted years to competing?” asked Ben “Bance” Bance, who placed second with Splyce at the Call of Duty Championship last season. Other European players shared his sentiment. Whether European players would be moving to Germany or the United States for the Call of Duty World League, there are laws in place that they must carefully abide by.

Activision considering an offline league means they are committed, but perhaps it isn’t the right time for one. The logistics alone are a nightmare and will require an abundance of money to get everyone situated. However, Activision is quite experienced in that department and certainly aren’t strapped for cash. For Call of Duty XP, Activision made the effort to fly out and house influencers, journalists and players for the extravaganza, so it’s safe to say that if an offline league is something they truly want to push for, they have the means to make it happen.

Something that also needs to be considered is location. While it’s clear where league matches would take place in North America, it’s not yet obvious where they would be held in Europe or APAC. At this stage, it appears that the CWL is still being put together, so maybe Activision doesn’t even know.

Is it all worth it?

As an esport, Call of Duty is relatively stable. It isn’t the largest of them all, it’s not the smallest of them all, but Call of Duty is a well-established franchise with a dedicated fanbase and a continuous stream of new esports fans. Perhaps an offline league would increase the legitimacy and promote more growth. Or perhaps it will fail. As fans, we should do whatever we can to avoid the latter.

Should the Call of Duty World League be played on LAN? Comment your thoughts below or tell us on Twitter @GAMURScom.