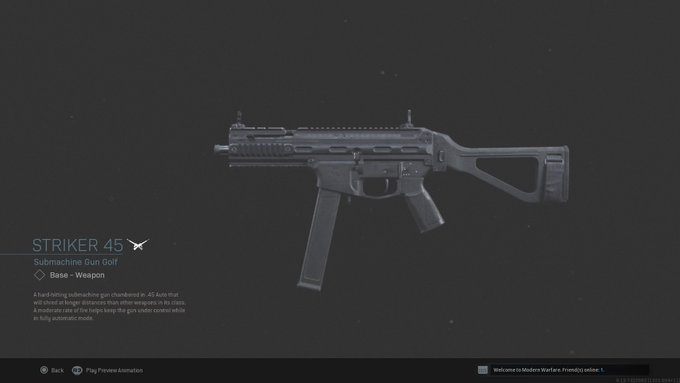 With today’s launch of season two in Call of Duty: Modern Warfare, two more weapons were added to the game.

Both the Grau 5.56 assault rifle and Striker 45 submachine gun can be unlocked via the season two Battle Pass, regardless of whether you buy the pass or just play the free version.

The Grau 5.56, “a lightweight and mobile assault rifle that excels at range,” can be unlocked at tier 15. The Striker 45, “a powerful SMG that has potential at longer ranges compared to its class with a moderate rate of fire,” is unlocked at tier 31.

To unlock both weapons, players only need to rank up their Battle Pass by playing the game. Both multiplayer and Spec Ops activities earn XP toward the pass.

There are also two blueprints, one for each weapon, later on in the Battle Pass. The Grau’s blueprint, Shadowsight, is unlocked at tier 85. The Striker 45 blueprint, Undertaker, is the final unlock in the pass at tier 100.

Outside of playing the game and earning them over time, there’s also an option to purchase a Battle Pass that comes with 20 tiers of unlocks, giving players access to the Grau 5.56 immediately. Individual tiers can also be purchased after that for CoD points.