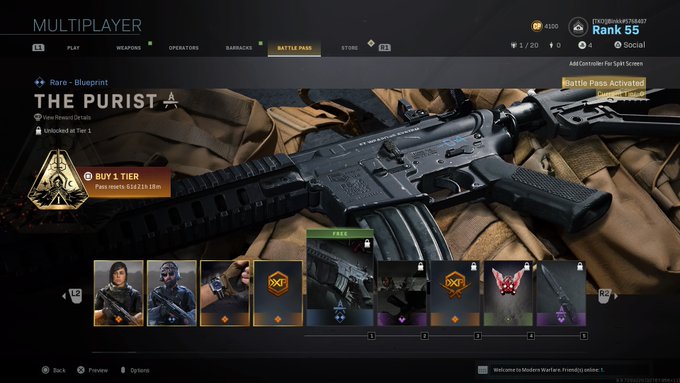 Season one of Call of Duty: Modern Warfare is officially live, which means that the game’s new battle pass is now available for purchase.

Similar to cosmetic systems in other games like Fortnite and Apex Legends, the Modern Warfare season one battle pass will feature 100 tiers of content. Over 20 tiers will be free to all players, but you can also pay to upgrade your battle pass to unlock more items.

And it’s incredibly easy to unlock the upgraded battle pass in Modern Warfare.

To upgrade your battle pass, simply navigate to the “Battle Pass” tab at the top of the multiplayer main menu. It’s between “Barracks” and “Store” toward the right end of the menu.

Once you’re there, you’ll see a message that explains the battle pass options that you can buy. The default upgraded battle pass that grants players access to all 100 tiers costs 1,000 CoD Points, which can be bought for $10.

Once you purchase the battle pass, you’ll automatically progress through the system and unlock items simply by playing multiplayer or Spec Ops.

Aside from all of the cosmetic items available, the battle pass also includes 1,300 CoD Points. This means that players who purchase the default upgraded season one battle pass and get to at least Tier 74 to earn 1,000 CoD Points can essentially get the next pass for free.

Additionally, players have the ability to upgrade their battle pass at any point during the season. The season one battle pass will “reset” in just under 62 days, according to the in-game timer. That means Modern Warfare season one will likely end on Feb. 3, 2020.