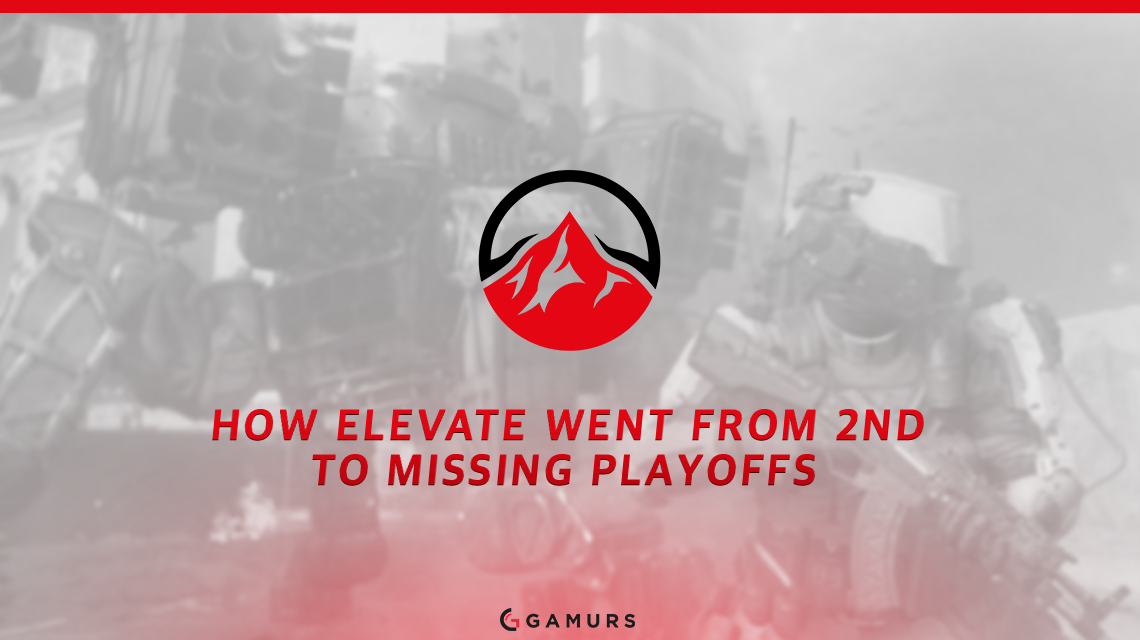 The regrouping of the former Team Revenge players at the beginning of the Call of Duty World League was refreshing. When they placed second at the 2015 Call of Duty Championship, they took everyone by surprise. After going their separate ways, none of them placed as well as they had when they were together, and so they rekindled their old friendship to begin anew on Black Ops 3 under Team eLevate.

The roster of Ulysses “Aqua” Silva, Brice “Faccento”, Jared “Nagafen” Harrell, and Remington “Remy” Ihringer were especially known for their unique playstyle, bringing new strategies into the game and punishing the monotonous routines other teams exhibited. They were especially well known for their Uplink play, a new game type released with Advanced Warfare. On Black Ops 3, this trend continued and they also worked on a strong Search and Destroy game. Elevate qualified for Stage 1 of the Call of Duty World League and ultimately placed fourth in the regular season and third/fourth in the playoffs.

Stage 2 began a bit rough for eLevate though, as they started out 0-3 before finding their groove. Toward the end of May, eLevate decided to drop Remy, who then joined 100 Thieves, and picked up Tyler “FeLony” Johnson. This was immediately followed by a series of wins that improved eLevate’s standing on the CWL ladder. Then, about halfway through Stage 2, eLevate impressed at MLG Anaheim by placing second overall. They were close to beating OpTic in the Grand Final, and talk about them being a top two team began circulating. The number two spot previously belonged to Rise Nation, who were shocked by eLevate and placed third at Anaheim. Of course, OpTic Gaming has had a firm hold on the number one position for the majority of the year and no one has really come close to taking it. Instead, the fight for number two has been a tumultuous one. Teams like FaZe and Team EnVyUs were also contesting Rise for the number two position and they still are, but now eLevate is completely out of the picture.

In their final six matches of Stage 2, eLevate only managed to win one of them. Coming down to the last week of the regular season, eLevate and four other teams were fighting for position, all hoping to qualify for the playoffs. Going in, they were 11-8 and had matches versus Team EnVyUs, 100 Thieves, and Rise Nation to look forward to.

The match against Team EnVyUs was a continuation of one previously rescheduled, with both teams coming in with a map win apiece. Team EnVyUs, though, is no easy opponent and they took two maps to close out the series. This particular match was a toss up but the one against 100 Thieves was completely in eLevate’s favor.

100 Thieves was out of the playoff race long ago. Perhaps the least professional CWL team in more ways than one, 100 Thieves only won two matches outright previous to their meeting with eLevate. A betting man would have put all his money on eLevate to come out with a win, especially because the playoff race was so tight and eLevate were in the best position to qualify. Instead, 100 Thieves had other plans. Perhaps it was revenge or perhaps it was redemption for a season gone horribly wrong, but 100 Thieves was led by Remy to a sweet victory over eLevate. This loss came as a shock to eLevate and all of a sudden put them in the worst position to qualify for the playoffs.

On the very last day of matches, eLevate, H2k, Dream Team, and Luminosity all played matches simultaneously, each against opponents already qualified for the playoffs, but one of them would fail to make it. That team happened to be eLevate,

For the last match of the season, eLevate had to face Rise Nation. They, along with the other teams with their future on the line, had a 11-10 record, but eLevate had the worst map win percentage and would therefore lose in a tiebreaker scenario. They also seemed to be tilting. After their loss versus 100 Thieves, Aqua asked his Twitter followers, “Are we really locked for Champs???”

In order to qualify for the playoffs, eLevate would have to defeat Rise and hope that either dT, Luminosity, or H2k lost their match. Things were looking great for eLevate, as they began the series versus Rise with two convincing map wins. Then, everything went sour. Rise Nation began to make a reverse sweep of eLevate, something that honestly isn’t very shocking anymore. A 6-2 loss on map 5 sealed the deal for eLevate, who then finished the regular season in 9th place.

Maybe it was a loss of confidence that was eLevate’s downfall, but when players begin questioning their situation before completing the task at hand, a decrease in performance is always expected. It’s a sign that the team isn’t getting along, and if the team isn’t getting along they won’t play together. At the professional level, teamwork is key. Lack of cooperation is one of the reasons good teams split up and why some teams never make it past scrims. There are plenty of sayings, words of advice, that apply in situations like these. “Keep your eyes on the prize.” “Focus on the task at hand.” Elevate thought they lost before it was over and that sealed their fate.

According to a Reddit post calculating CWL Points earned by each of the Pro Division teams, Aqua’s fears might be legitimate. Due to their performance in Stage 1 and Stage 2 combined, eLevate have  60 CWL points, according to the post, which puts them in 6th place. At the conclusion of Stage 2 playoffs, the top 6 teams in terms of CWL Points qualify for the Call of Duty World League Championship automatically, which also means their rosters are locked in. However, Dream Team, Cloud9 and H2k are close behind in points with 40 each. Elevate can be overpassed if any of them win their first round match at Stage 2 playoffs, which would certainly ease Aqua’s mind if a roster change is what he is looking for.

It’s not clear yet what type of roster change would occur should eLevate choose to make one. Aqua finished near the top of the stat sheet in terms of kill/death ratio as well as score per minute. On the opposite end of the spectrum is Faccento. Of course, stats like those aren’t the only thing that matters in competitive Call of Duty, but they certainly help.

If eLevate isn’t locked in for the Call of Duty World League Championship, what roster changes would you expect them to make? Comment below or on Twitter @GAMURScom.

Josh Billy is a long time Call of Duty fan. Contact him via email at [email protected]or on Twitter @Orbit_CH3MISTRY.