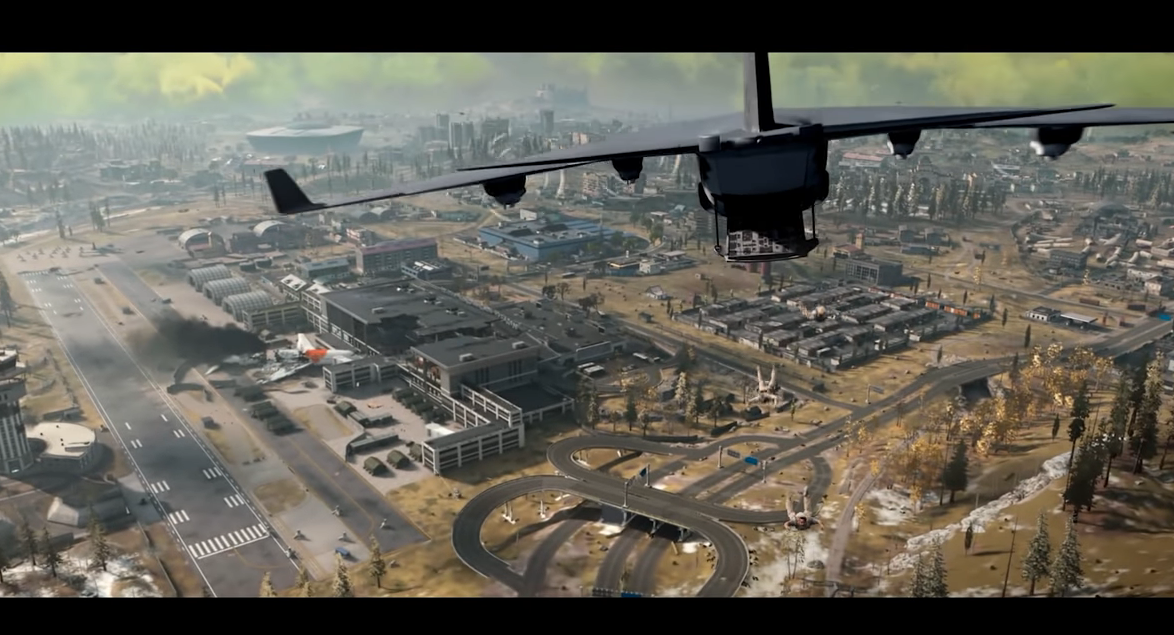 It’s certainly an exciting time to be a Call of Duty fan.

Yesterday’s season two cinematic seemingly teased a battle royale mode coming soon to Modern Warfare. While this left many fans to speculate, several leaks made Warzone, the battle royale’s suspected name, more of a convincing possibility. And Activision has been actively removing any Warzone content for copyright infringement.

Here’s everything we know about Warzone.

One of the more obvious signs pointing to a battle royale mode came from Activision itself. In the season two cinematic, one soldier claims that the “gas is closing in” and they need to be exfiltrated immediately. This is likely a nod to the ring that will force players to move to smaller circles until the match is over.

As the trailer shows soldiers shooting at one another in a devastated airport, a plane flies overhead letting off four skydiving soldiers—a typical marker of any battle royale.

A Warzone logo was circulating before Activision caught wind of it, removing any posts containing the image. The potential logo featured a few Operators standing around military vehicles with the words “Call of Duty: Warzone.”

Though the image was removed, players have been able to glitch into the Warzone lobby. One player posted a picture of their discovery on Reddit, claiming that the menu showed a “Drop Kits” menu, as well as Squad Fill and Training options. Most battle royales allow a team to fill their incomplete squad with random players, which is likely what “Squad Fill” means. Drop Kits, on the other hand, are a bit harder to figure out.

Call of Duty data miner TheGamingRevolution explained that Drop Kits may allow players to create a class after a specific objective is completed in-game. These challenges may look like “stay in the gas for X” or “get revived X amount of times,” according to the data miner.

A Modern Warfare fan leaked what could potentially be the battle royale map in early December, which resembles Spec Ops map Verdansk. The short video also gave us what may be an early look at the HUD, as well as what it would sound like when one of your squadmates gets knocked down.

The Spec Ops map was the backdrop of yesterday’s season two trailer, confirmed when Ghost says “something’s wrong in Verdansk” and “they’re targeting their own.” While an explanation for the friendly fire wasn’t provided, it’ll likely be the main reason for the battle royale’s existence.

Some players believe that the Spec Ops locations and Ground War maps will be combined together to create a huge battle royale map that can possibly hold 200 players simultaneously, as reported by Eurogamer.

TheGamingRevolution data mined an image that shows a possible Supply Station. Players may be able to visit the station and pick up some new gear or killstreaks using in-game currency.

It’s expected that Warzone, much like Apex Legends and Fortnite, will be free-to-play for players who don’t own Modern Warfare. But that, much like all the other Warzone information, hasn’t been confirmed by Infinity Ward or Activision.

One fan posted more unanswered questions on Reddit today. Since it’s typical for battle royales to have their own Battle Pass, will Warzone follow suit or will it share one with Modern Warfare? Will tactical nukes be an earnable killstreak in the battle royale? And will developers continue to support the mode even after Modern Warfare’s player base tapers off?

With players and data miners expecting an announcement this week, the answers to these questions will likely be revealed soon. But without Infinity Ward confirming anything, all leaked information should be taken with a grain of salt.