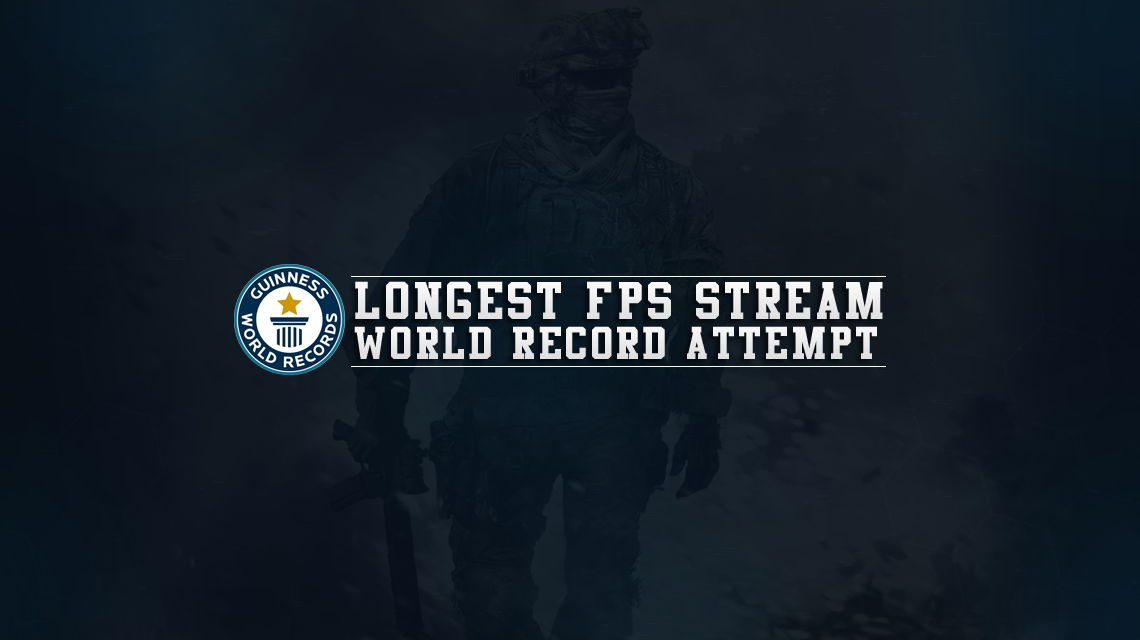 A lot of gamers stay awake into the late nights and early mornings, grinding on games such as Call of Duty and Halo. One college student though, has decided to take the classic term “all-nighter,” to the next level, by turning his all-nighter into an all-five and half dayer, and going for the Guinness World Record for the longest First Person Shooter live stream. We spoke with Joseph Perez, who when we interviewed, was 79 hours in to the 135 hour run.

Tell us a little bit about yourself; background, full name, age, any schooling you may be in, etc. “My name is Joseph Perez, I am 20 years old, and I am a sophomore in college. I am currently taking online classes this semester. I was previously playing baseball in college, but had to stop this past semester due to a back injury.“   How did the idea to go for this record first come up? “I saw someone set this record in some article, and I thought it would be cool to have my personal stamp in gaming as the community has grown over recent years from a stereotype of lonely introverts to people who just genuinely enjoy video games. Self-accomplishment and entertainment.  I thought it would be really nice to allow anyone who wants to witness a world record, to have the chance to do so, which is why i decided to stream it. I am loving every moment of it.”   Describe the process to get in contact with Guinness and begin the attempt. “I had to make an account through guinness, read everything that the attempt will require and made sure I knew what i was getting myself into. From there, since the record was already in the books, I just had to apply, cross my fingers, and wait for a couple of months and hope that I was accepted!”   Describe the “T’s” that need to be crossed and “I’s” that need to be dotted to officially beat the record. “The main hurdles I needed to jump to officially beat this record was to have the viewers and witnesses constantly overseeing the event, as well as having the proper documentations. I have heard that the documentations will more than likely be spanning over 100 pages as well as video evidence for the entire event. Recording while live streaming was a great way to ensure that I was able to get some footage in case anything goes wrong with the initial setup. It is also important to be able to have my nutrition tailored for this kind of unusual event as well as being able to stand up and keep my blood flowing so nothing medically goes wrong.”   Have you done anything like this before (Gaming Marathons) or did you start with this attempt? “The closest thing I have done to gaming marathons were going over to my friends house and playing leisurely. I have never done anything like this, but I decided to put myself to the test and see what I can do.”   In a few words, how are you feeling right now? “Tired. I feel tired, and I have anxiety.  I am not too sure entirely why, but at the same time, I am really happy right now being able to do something I love that others are enjoying as well.”   Are you feeling in anyway sick of Advanced Warfare, considering you’ve been playing it for over 79 hours now? “I am actually not sick of Advanced Warfare, yet.  Usually I can get bored playing for a couple of hours, but having the viewers and personable chats in stream is actually keeping my mind at ease and helping me enjoy myself throughout all times of the attempt.”   We then gave Joseph the opportunity to freely talk about his future plans, goals, or where people can find him. “I do have future plans to attempt more world record in gaming marathons for other genres, while live streaming as well.  I also am really interested in charity live stream marathons.  I am active with meals on wheels and would like to expand to more charitable events with this wonderful community. I also have a YouTube channel that is has over 8,000 subscribers. I really do like being able to help out others and having a future with streaming or creating content on YouTube is a huge goal of mine. I am motivated by everyone who appreciates the content I put out and the one’s who I am able to make a difference in their life, whether they are going through a rough time, need advice, inspiration, or just for the sake of entertainment.”   According to Guinness rules, Joseph is allowed a ten minute break for every hour he streams, which he saves and uses during naps of about two and half hours long to stay fresh. Joseph also choose Search and Destroy as the main gamemode for his run, as it provides breaks in between rounds and after dieing, which a respawn mode wouldn’t give. He uses these breaks to interact with people in the stream and just get a chance to take his hands off the controller. Being sedimentary for such a long period of time puts a strain on blood flow, and to counter this Joseph will occasionally stand and do small mini exercises in front of his desk. In addition to this, the amount of movement he gets during the attempt is minimal to none. Because of this Joseph has to make every calorie he takes in count and has to avoid junk food as much as possible.

Joseph beat the previous record just before 5 PM EST on April 30, 2015. His first tweet after the record was broken came in about an hour after. https://twitter.com/WiLDPrezi/status/593896607193571329 Though not stopping at the previous record of 135 hours, he plans to continue for another 5-10 hours, to make sure he has sealed the record. https://twitter.com/GWR/status/593905247979966465   You can watch Joseph on Twitch here. Follow Him on Twitter here. Subscribe to his Youtube channel here.